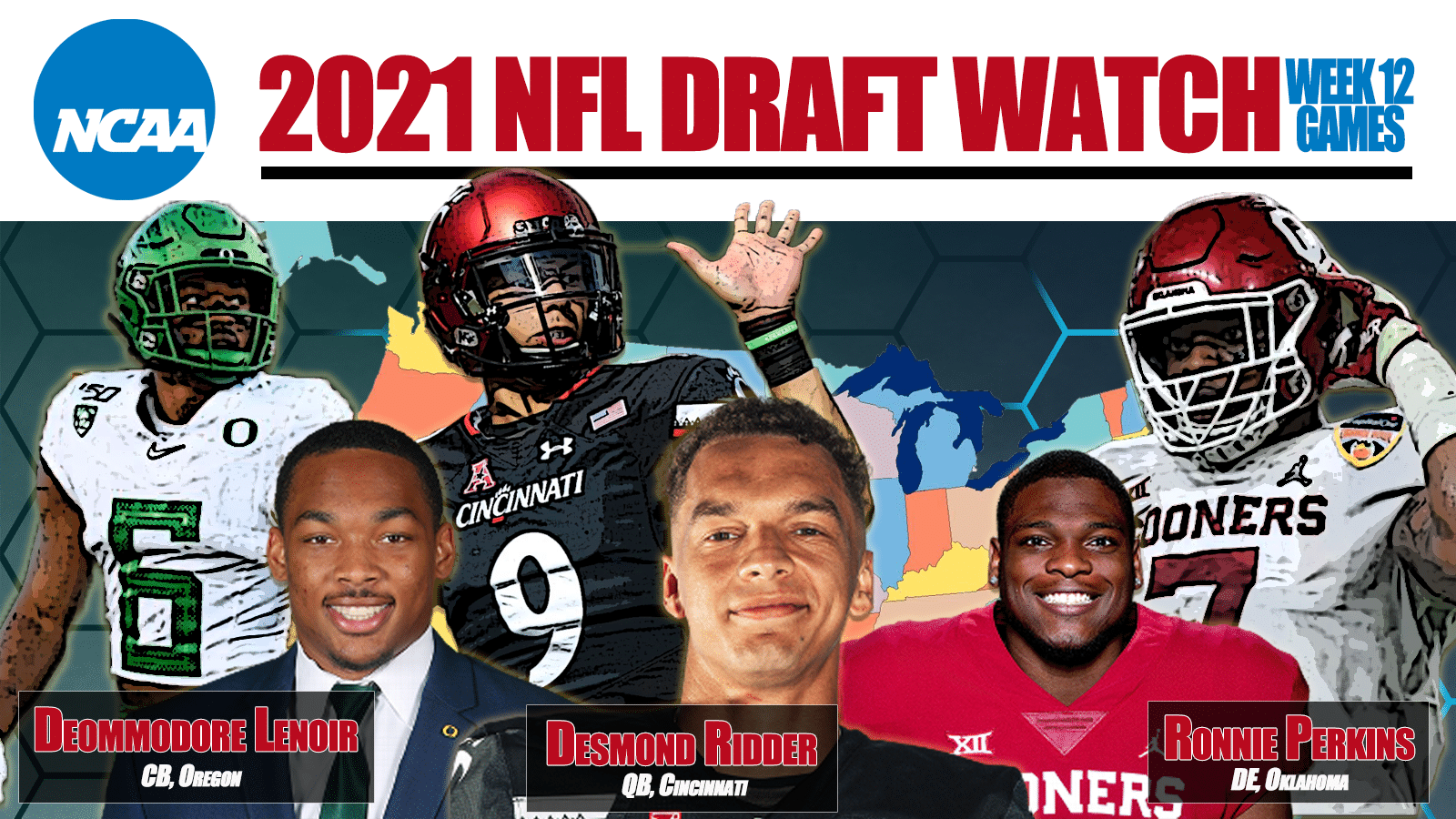 In a normal year, this would be the second-to-last week of the regular season in college football. NFL Draft tape would be plentiful and the playoff picture would be narrowed down to about six to eight teams. However, nothing is “normal” in 2020 and we still have plenty of football left to play, which benefits the fans more than anybody.

With so many teams still in the postseason conversation, the intensity of each game dramatically increases. A team like Cincinnati has a legitimate shot to be the first group of five school to make the final four, while Oregon and other Pac-12 and Big Ten squads are in the beginning stages of building up their resumes.

Then there is the Big 12, which needs Oklahoma State to run the table to increase the conference’s chances at receiving an invite to the big dance.

To stick with the theme of playoff contenders, we will focus on the NFL Draft prospects from the three schools mentioned above.

Cincinnati has absolutely dominated its competition this season as they have an average margin of victory of about 30 points per game. Meanwhile, UCF has been one of the best programs in the AAC in recent years, and they are riding a three-game winning streak after dropping two in a row. This matchup has all the makings of an instant classic.

The Bearcats are led by quarterback and potential mid-round pick Desmond Ridder. As a dual-threat quarterback, Ridder can make plays with his feet and his arm, and he has accuracy when throwing on the run to compliment that playing style. If he can become a quicker decision-maker and learn to take what the defense is giving him, the redshirt junior can climb his way into the Day 2 conversation.

Defensively, Cincy has James Wiggins, a smart safety who excels in zone coverage and has some impressive ball skills. Wiggins does have a few bad tendencies like being late to react to routes and ducking his head when tackling, putting him in the fourth or fifth round category.

As for the Knights, they have a legitimate deep threat in Tre Nixon. The wideout has the speed to win on vertical routes and a wide array of releases to beat press coverage, which is a rare combination for speed receivers at the college level. However, his hands and ability to play through contact are holding him back as a Day 3 prospect.

At cornerback, Aaron Robinson has some quick feet and an impressive ability to click and close on receivers to limit their yards after the catch. Tight hips will make it hard for him to be effective in man coverage at the next level, suggesting a position change to safety may be in order. Robinson will likely hear his name called towards the end of the NFL Draft in the sixth or seventh round.

Safety Richie Grant is the biggest name to keep an eye on for UCF. As a late second to early third-round prospect, Grant has the range to play the single-high safety spot to go along with the change of direction skills and aggressiveness to cover slot receivers at the next level. Shoring up some spotty mental errors and inconsistent tackling issues could catapult him into the first-round discussion.

As if the Bedlam Series needed to add more fuel to fire, the intensity of the rivalry is even higher this year as Sooners have a chance to end the Cowboys’ playoff hopes. Oklahoma State will be favorites in their next two contests following this game, so a win this weekend should earn them a spot in the Big 12 championship.

Wide receiver Tylan Wallace is an absolute offensive weapon for the Cowboys. Wallace has very strong hands, excels in contested catch situations, and is a physical runner after the catch. He will likely be a Day 2 pick and needs to show more ability to create separation if his draft stock were to increase.

On defense, safety Kolby Harvell-Peel is another player to keep an eye on from OSU. Harvell-Peel can play in the box to provide run support, but he struggles in man coverage against more agile slot receivers. Unless he polishes up his coverage skills, he will likely be a third or fourth-round pick in the NFL Draft.

Patrolling the perimeter for the Pokes is an early Day 3 prospect in Rodarius Williams. The cornerback understands how to use his length to be effective in man coverage, but he is slow to react to short or underneath routes and seems to play with a fear of getting beat deep.

Shifting the focus to the Sooners, running back Rhamondre Stevenson was suspended to start the year and has only played in two games, but he has already accumulated 191 rushing yards and five touchdowns this season. Stevenson is an impressive downhill, straight-line running back who is hard to bring down in the open field.

However, he struggles to recognize cutback lanes and is not much of a receiving threat, which combined with a rather small sample size in college makes him a potential fifth-rounder.

Making room for Stevenson is center Creed Humphrey. As a potential top 20 pick, Humphrey is an instinctive interior wrecking ball with some country strength and the leadership skills to be the orchestrator of an NFL offensive line. He could add some lateral quickness to be more effective blocking the second level in a zone-heavy scheme, but that is getting into nit-picking territory.

Potential third- or fourth-round pick Ronnie Perkins holds down the edge for Oklahoma’s defense. Perkins has some impressive change-of-direction skills and agility that allow him to win with stick moves as a pass rusher and defeat reach blocks against the run. However, he is often late with his initial chop to begin his pass rush moves and struggles to hold his ground against down blocks and double teams.

We have seen two different UCLA teams in their two games this season – one that lost as a touchdown favorite to Colorado and another that had a blowout win against Cal as an underdog. As for Oregon, they have taken care of business in both of their contests, but after winning the conference and the Rose Bowl last year, the Ducks have their eyes set on a perfect (albeit shortened) season and a playoff berth.

As a potential Day 2 pick, defensive tackle Osa Odighizuwa might be the most notable draft prospect the Bruins have. Odighizuwa wins with some impressive play strength as a run defender and a quick get off as a pass rusher. If he can add a few finesse moves to his pass rush arsenal, he will have a chance to sneak into the Day 1 conversation.

Demetric Felton is a hybrid running back/wide receiver type of player who is best described as an offensive weapon. He is a dynamic receiving threat with good contact balance and home run ability. However, Felton needs to improve as a blocker and lacks NFL-level size at 5’9” and 185 pounds, making him an early-to-mid Day 3 guy.

Up front, UCLA has center Paul Grattan who is a potential sixth- or seventh-round prospect. Grattan is a tone-setter along the offensive line and has some nastiness to finish with defensive linemen on the ground. The problem is he has short arms to handle explosive interior defenders and stiff hips, limiting his effectiveness in a zone-heavy rushing scheme.

Battling with Grattan will be Oregon defensive tackle Jordon Scott. As a stout run defender, Scott has the power and strength to win at the point of attack and displace offensive linemen. If he can start to recognize blocking schemes more quickly and find a few effective pass rush moves other than a bull rush, he will improve on the late-round NFL Draft projection he is facing.

On the outside for the Ducks is cornerback Deommondore Lenoir, a potential fourth-round pick. Lenoir has the change of direction skills and play-making ability to play man coverage competently at an NFL level. He does need to get some more reps in press coverage and show some better instincts, but the framework is there for him to be an effective corner at the next level.

CJ Verdell hopes to become the next Oregon running back to hear his name called in late April, and his vision, footwork and instincts will likely make that a reality. He is not very elusive in the open field and struggles in pass protection. Verdell currently projects as a sixth- or seventh-round pick.