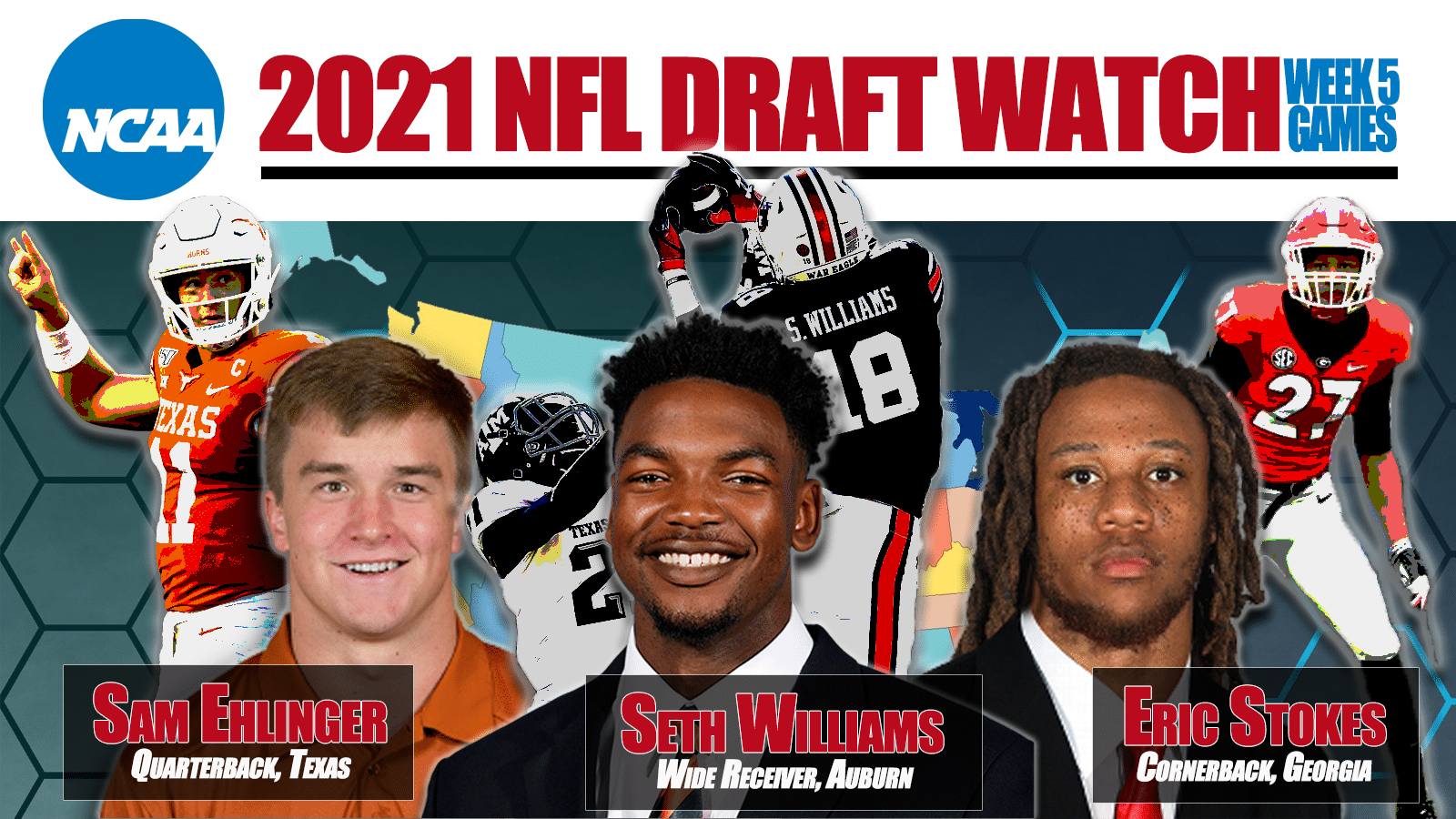 There was plenty of excitement heading into last week and the games did not disappoint. Mississippi State quarterback K.J. Costello – who was listed as a player to watch heading into the weekend, humblebrag – threw for 623 yards and five touchdowns while pulling off an upset against LSU.

That was not the only shocker as Kansas State came back from a 21-point deficit to take down Oklahoma, and Texas and Texas Tech gave us an overtime thriller. It is safe to say college football is officially back!

This week’s slate might be even better as we get a top 10 showdown between Auburn and Georgia to go along with a handful of other intriguing matchups. As always, Expand The Boxscore has you covered with three games that will feature several NFL Draft prospects.

As a college football fan, this is the type matchup you are looking for. Two top 10 teams, conference supremacy on the line, and plenty of players who will be playing on Sundays. You cannot ask for much more than that.

Auburn has a couple of wideouts who project as Day 2 picks in Seth Williams and Anthony Schwartz. Williams is a slightly better prospect who is a crafty route runner and thrives in the intermediate to deep areas. He struggles to adjust to balls behind him and shows limited ability to make plays after the catch.

At 6’0” and 179 pounds, Schwartz is best as a smaller slot receiver who can take the top off a defense. However, his lack of size does lead to some struggles beating press coverage and in contested catch situations.

On defense, Big Kat Bryant – who’s in the running for best name in college football – is an edge defender who can win with speed and has a high motor as a pass rusher. He can fit into a 3-4 scheme as an outside linebacker or as a 4-3 defensive end, which should help elevate his draft stock. Currently, Bryant projects as a third- to fifth-rounder in the NFL Draft.

Shifting to the second level of the Tigers’ defense, K.J. Britt is an instinctual linebacker that can put himself in a position to make plays against the run, but he lacks the block shedding skills and tackling form to truly be a force as a run defender. That combined with limited man coverage abilities are holding him back as a prospect as he’s slated to be an early Day 3 pick at the moment.

One person who will be testing Britt’s coverage skills on Saturday is tight end Tre’ McKitty. The Florida State transfer wins with solid change-of-direction and ability to read coverage, but he lacks explosion and speed to separate against athletic linebackers. On draft day, McKitty will likely fall anywhere within the fifth and sixth rounds.

Another big matchup to watch will be between Georgia cornerback Eric Stokes and the two Auburn wide receivers mentioned above. Stokes is a second-round prospect who excels at the line of scrimmage in press coverage, which should come in handy against Williams. However, the Bulldog’s ball skills are lacking and that could lead to trouble in contested catch situations.

Georgia also has two Day 3 prospects along its defensive line in Jordan Davis and Malik Herring. Davis is a two-gap defensive tackle who excels as a run defender but leaves something to be desired as a pass rusher. Herring, on the other hand, has a plethora of pass rush moves but struggles to hold up at the point of attack against the run.

Texas avoided disaster last week after quarterback Sam Ehlinger led the team to a 15-point comeback victory against Texas Tech. Those who have followed the three-year starter’s career should not be surprised as he has excellent leadership qualities and a high football IQ. However, he struggles to complete deep passes, making him a middle-to-late Day Three prospect.

Protecting Ehlinger is a late first- to early second- round pick Samuel Cosmi. At 6’7” and 310 pounds, Cosmi has NFL-level size and strength to be a mauler in the run game and is athletic enough to hold his own on the edge as a pass protector.

Defensively, Caden Sterns looks to join the long list of UT safeties to play at the next level. The Longhorn is best as a deep or free safety and has impressive athletic ability, giving him sideline-to-sideline range. Sterns will need to improve his physicality and tackling to increase his draft stock as he’s currently slated as a Day Two selection.

Speaking of safeties, TCU has a couple of them who could be outstanding professionals. Ar’Darius Washington lacks the size and strength to be an impactful player against the run, but he has some impressive range and instincts that could help him sneak into the end of round one in late April.

Then there is Trevon Moehrig who is more effective as a run defender, but he needs to improve his angles in pursuit to elevate his stock past the late second to early third round project he’s currently slated in.

At linebacker, the Horned Frogs have Garrett Wallow who has been extremely productive due to his good instincts, tackling ability, and gap discipline. Wallow does need to work on his block shedding and loosen up his hips to be more effective in man coverage. Currently, he projects as a third- to fifth-rounder.

Offensively, TCU has wide receiver JD Spielman has an extensive route tree and can be a dynamic playmaker. However, at 5’9” and 185 pounds he struggles to win in physical situations and is injury prone. Come NFL Draft day, Spielman will likely fall between the fifth and seventh rounds.

When it comes to NFL Draft prospects, North Carolina and Boston College are not exactly the first two programs that come to mind. However, both schools have turned out some quality pros in the past and have a handful of players this year who will hear their name called in late April.

For UNC the most notable player is linebacker Chazz Surratt. As an impressive athlete who excels in coverage, Surratt fits the description of a modern-day linebacker to a T. His instincts are not up to par yet since he is a converted quarterback and still learning the nuances of the position, but the Tar Heels’ athletic ability makes him a late second- to early third-rounder.

Offensively, North Carolina has a couple of explosive weapons in wide receiver Dazz Newsome and running back Michael Carter. Newsome is a savvy route runner who can be a vertical threat from the slot but has a relatively small catch radius and struggles against physical defenders.

He has a chance to sneak into the back end of Day 2, but he will likely be an early Day 3 pick.

As an elusive ball carrier with good vision and patience, Carter projects as a fourth- to fifth-round prospect. To improve on that projection, the senior will need to show more physicality as a runner and prove that he can handle the role of a number one back, which he has yet to do.

They might not be the most fun to watch, but Boston College has a few noteworthy offensive linemen. Ben Petrula currently projects as a priority free agent, largely because of his lack of footwork and agility in pass protection; however, he switched to guard this season and has only allowed one sack, per Pro Football Focus.

Continuing that trend will be crucial for Petrula’s NFL draft stock.

Zion Johnson also changed positions this year but moved from guard to tackle. Johnson is a mauling run blocker with an impressive anchor in pass protection, who will likely fall anywhere between the end of second-round to the beginning of the third.

Finally, there is center Alec Lindstrom whose brother was a first-round pick of the Falcons two years ago. Lindstrom is an impressive zone run blocker who needs to work on his hand placement as a pass protector. He is currently slated as a Day 3 pick that a lot of teams who run a zone-heavy rushing attack will target.