Needs to work on his run defending consistency as a defensive lineman, but showcases efficient hand usage, a good bull rush and a promising swim move to succeed at the next level

– Play strength is limited
– Consistently tries to use spin move, but doesn’t get production from it
– Needs to add more pass rush moves to his arsenal and refine the ones currently in it
– Has to showcase a clear pass rush plan on a higher number of snaps

Hutchinson profiles as an ideal 5-technique in a 4-3 base scheme. He most likely will start out as a 1st and 2nd down run defender – as long as he adds play strength – at the next level. If he can become more consistent with his swim move and bull rush, he should be a three down starter by his second season while kicking inside to the 3-technique or the 4i- spot on pass rushing downs. . If his run defending consistency improves, barring a significant injury, Hutchinson should hear his name called on the first or second night of the NFL draft.

Will Hutchinson put in the work to become a more consistent run defender? Already having very good and efficient hand usage, if he does expand his pass rushing repertoire he will become a high level strong side edge defender and interior pass rusher on 3rd downs at the next level. To become an overall versatile defensive line force, he’ll need to work on adding more pass rush moves and become a more consistent run stuffer next year. Due to his versatility, and depending on if he can add more pass rush moves to his game, Hutchinson has a puncher’s chance at coming off the board on the first night of the draft. 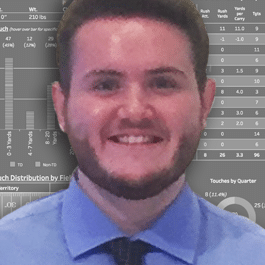