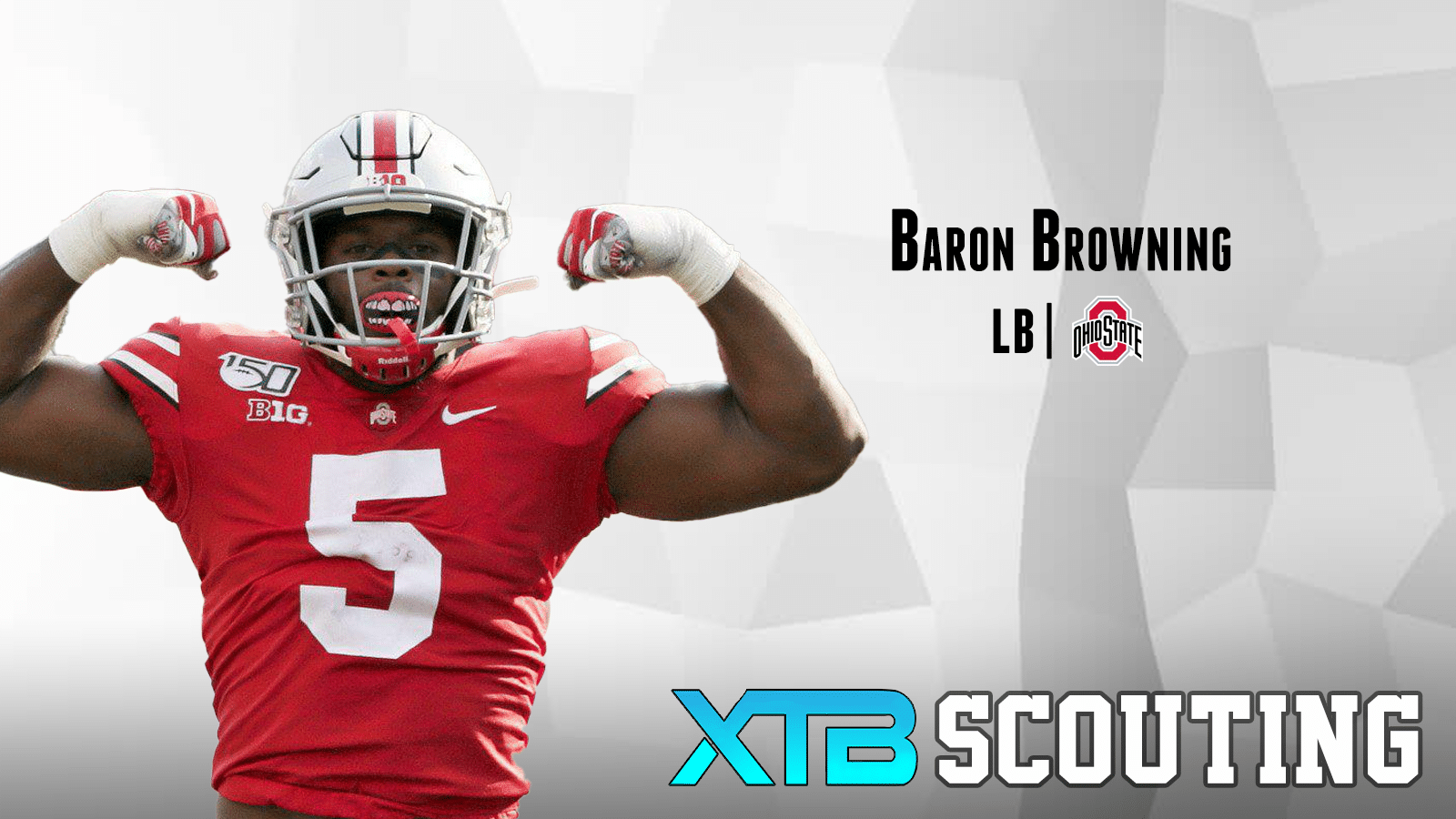 An athletic off ball backer with good speed, blitz ability, and coverage potential

Baron Browning spent the 2019 season posting career highs in every major statistical category. He was one half of a middle linebacker rotation with Tuf Borland, and appeared in 12 out of 14 games for the Buckeyes’ 4-3 defense. He has increased his production in each of his first three seasons, and there is no reason to expect any less this year after somewhat of a breakout year in 2019. The former 5-star recruit has been called an underachiever by some, but that is only because he has potential that few possess and many desire.

– Erases ground between himself and ball carriers with good closing speed
– Sideline-to-sideline range. Can move make plays all over the field
– Good power in his hits when he squares opponents up
– Can mirror and neutralize athletic QBs as a QB spy
– An asset in pass rush/blitz situations. History of productivity off the edge
– Comfortable in zone coverage over the middle and out to the curl/flat areas
– Stout at the point of attack as a run defender

– Tends to wrestle opponents to the ground rather than form tackle
– Man coverage ability is lacking despite being athletic enough to succeed
– Route recognition in zone. He is a bit slow in processing what happens around him despite his comfortability
– A step slow when forced to read and react. Much better in fast paced situations when he can simply go
– Block shedding can be tough for him at times
– Will occasionally take himself out of the play when scraping over the top
– Has problems with consistency. Displays outstanding flashes of ability but does not exhibit them with regularity

Browning has the athleticism and size to be a solid rotational off ball linebacker and the potential to develop into something more. He can fit as a Mike ‘backer in 4-3 and 3-4 schemes. His athleticism will allow him to be useful in passing situations both in coverage, as a pass rusher, or as a QB Spy. With the skills he has displayed as a blitzer and his combination of size and athleticism, there’s a chance he could even play as a pass rushing outside backer. Teams that need to add some speed and range to their linebacker rotation might find him to be a worthwhile pick on Day 3.

Browning has some high level tools at his disposal, but will need to show that he can put them to use consistently. Developing his ability to read and react to plays will be a key thing to watch, as well as his ability to stay under control while scraping play side. He will also need to work on his block shedding and becoming a more efficient tackler. A big area to keep an eye on will be Browning’s pass coverage and whether can capitalize on his athleticism by locking up tight ends and running backs in man. With his speed and agility, there is the potential to be a top-tier coverage backer. He just needs to tap into that ability.