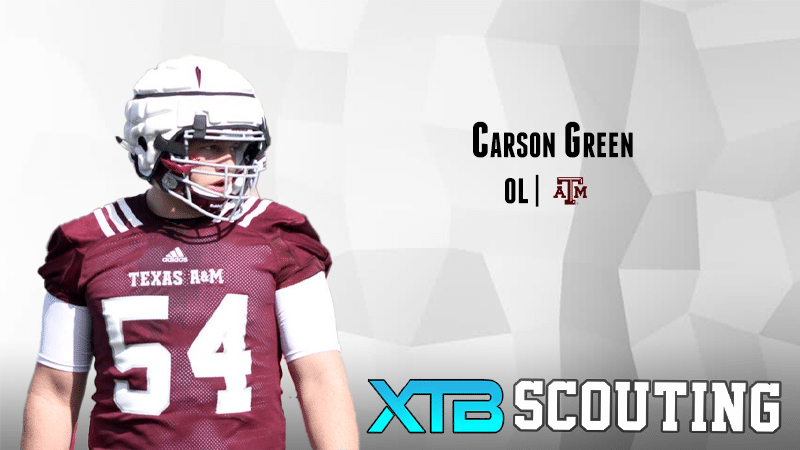 A big tackle with an ideal body type and decent hands, but average athleticism and power

Carson Green is a big-bodied tackle with an ideal frame for a right tackle, although his length isn’t notable. His smarts and size work well in pass protection situations, and it usually leads to a secure pocket when the timing is right. However, Green does not have the foot quickness to mirror athletic edge defenders, and it leads to some lapses versus speed. In the run game, he has too many technical lapses that are caused by leaning and overextending his weight towards the target. He isn’t going to be a bully either, and will struggle to simply outmuscle defenders out of the way. Green’s baseline size and technique will give him a shot to stick, but he doesn’t have the type of skill set that teams are going to covet as a future starter. He’s more of a developmental backup type.

– Good enough mover to hit combo blocks and work to the second level.
– Movements as a pass blocker are smooth. Kick step is controlled and easy rather than forced.
– Might be able to kick inside to guard if he can hold up from a strength and leverage standpoint.
– Plays patient and smart against stunts, and won’t panic when he has to trade off guys with his guard.
– Anchor seems adequate for an offensive tackle.
– Accuracy with hand placement is there on the initial strike.
– Won’t panic and make foolish decisions even when he is placed in a bad spot.

– Too reliant on his hands rather than his feet, and it leads to instances of leaning and losing his balance.
– Needs to be more controlled with his angles as a run blocker, or he is going to get dusted at the next level.
– Lack of power and finishing ability isn’t going to make many defenders fear him once he gets the mitts on target.
– Not a great puller, and shouldn’t be asked to cover much ground in the backfield.
– Must become better at adapting to twitched up guys through improved anticipation and positioning.
– Has a habit of getting too narrow when working as a run blocker, and that may be part of why he has so many balance lapses.

Green projects as a backup tackle with the potential to become a low-end starter with improvements to his technique and body control as a run blocker. His best fit will be as a zone blocker, although there are going to be some limitations even in that scheme. The most likely outcome for Green is that he will be selected somewhere on the back end of day three to be a developmental swing tackle or backup right tackle. If a team falls in love with the resume and pass blocking, he might be able to claw up towards the top 150 picks.

Green will get his fair share of challenges this season, so getting another year of tape against a talented variety of pass-rushers will be useful. Whether or not he can get stronger as a run blocker is one of the biggest keys to a climb up draft boards this year though, and he’ll have his hands full trying to improve that. If Dan Moore Jr. misses any time due to injuries, Green might get the call to fill in his spot at left tackle, which would help make his projection a little easier.