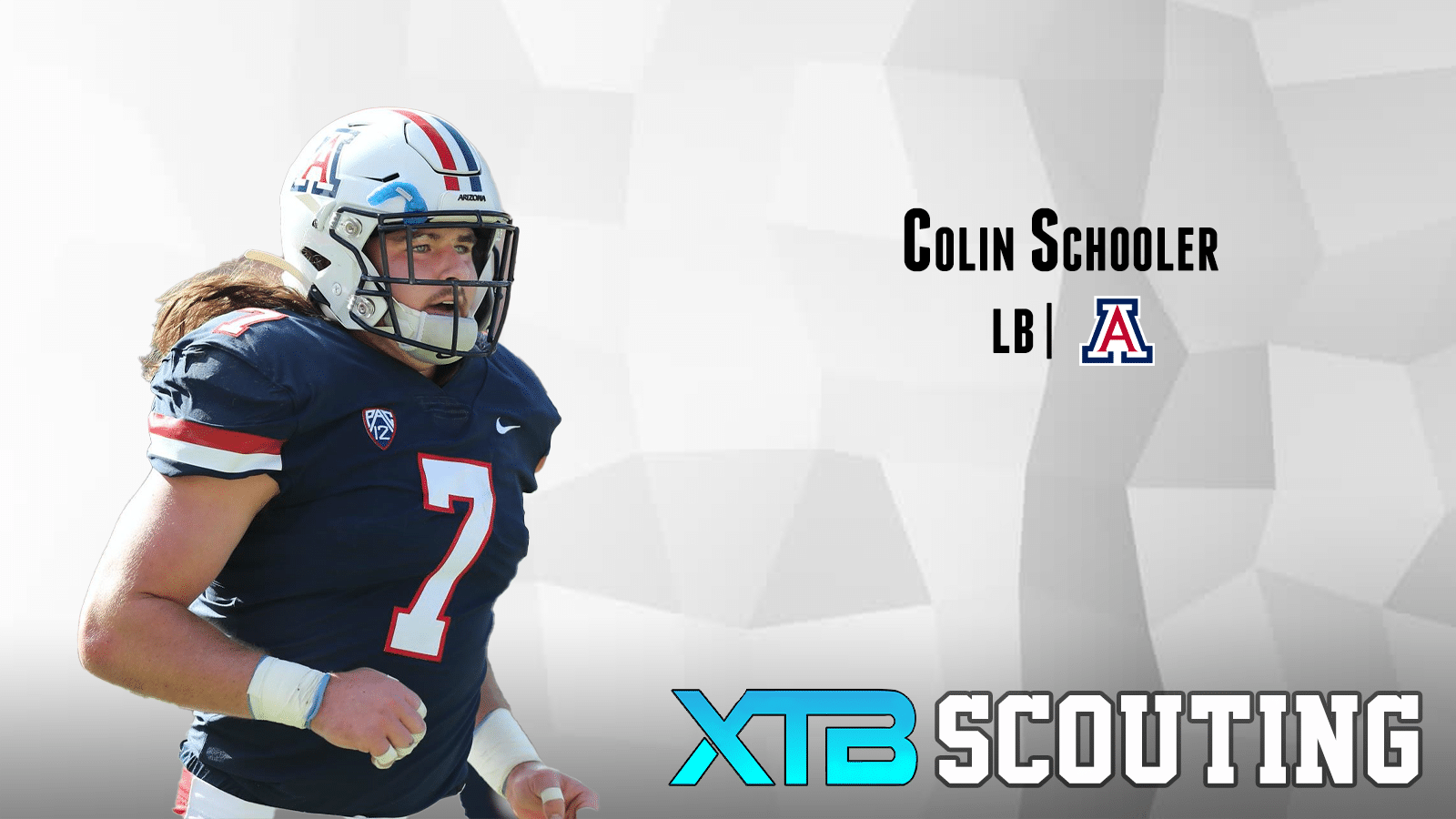 Colin Schooler came to Arizona as a 3-star recruit and earned a starting spot five games into his freshman year. In Tucson, he has been a tackling machine, racking up 313 total tackles – 204 solo and 46 for loss. The Wildcats used a hybrid 3-3-5/4-2-5 defensive system with a zone-heavy coverage scheme and had Schooler play multiple off-ball linebacker spots the past few years. The Dana Point native is best as a run-stopping downhill middle linebacker due to his good instincts and quickness.

– Good instincts to swiftly diagnose run plays and recognize the blocking scheme with good quickness to beat OL to the gap against gap runs
– Against inside zone, honors his interior gap and can make the play when the RB bounces to play side C
– When coming downhill, takes on blocks with good pad level, giving OL less surface area to block
– On the backside of power and outside zone, he plays with good tempo to honor his backside gaps and is good at sifting through the trash to be in a position to make plays
– Is a sure tackler both in his gap and in space, using good pad level, consistently wrapping up, and he can make tackles with OL hanging on him
– Quick transitions from run to pass against play action
– As the hook to curl defender in zone coverage, he has good eye discipline to find WRs coming into his area and can read the QB to anticipate throws with good quickness to takeaway throws over the middle
– When blitzing, he can get pressure against RBs using a bull rush

– Takes on blocks with his shoulder instead of his hands, diminishing his ability to block shed
– When moving laterally, lacks the play strength to hold his ground against TEs and OL
– Struggles to constrict rushing lanes against base blocks from TEs and OL
– On the play side of outside runs, he consistently overruns the play and lacks the COD to recover
– Has limited range horizontally as a run defender due to a lack of speed
– In pursuit, he takes too deep of an angle and has adequate COD to be in a position to make a play when RBs cutback
– Follows shallow crossers in zone coverage, creating windows for QBs to throw to
– Adequate acceleration to stay in-phase against RBs and TEs on intermediate to deep routes in man coverage
– Needs a big cushion when covering backs out of the backfield to compensate for a lack of speed, opening up underneath routes. COD issues give him no chance to cover RBs on choice routes
– As a pass rusher, he doesn’t use his hands limiting his ability to defeat OL

Schooler would be a good fit as the Mike linebacker in a 4-3 scheme or at either inside ‘backer spot in a 3-4 scheme. Teams who are looking for someone to help stop inside runs and play a lot of zone coverage may be interested in him, but Schooler’s limited athletic ability will make it tough for him to find a spot in the modern version of the NFL. The Wildcat currently projects anywhere from a six-round pick to a priority free agent.

Can he start to take on blocks with his hands? Expecting Schooler to dramatically improve athletically in a year isn’t realistic, so if he’s going to carve out a role as a run-stuffing linebacker, he needs to defeat blocks with his hands to become better at shedding. That way he’ll be able to make more plays and thus, be better at his niche.