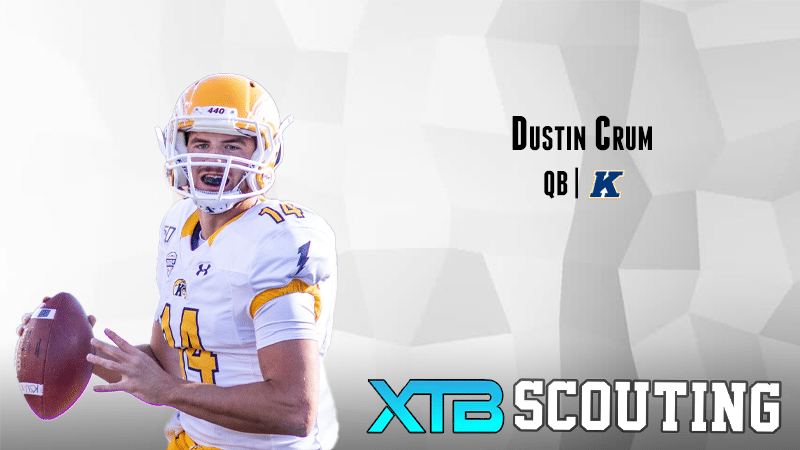 A good athlete who can escape the pocket well and make plays with his legs, Dustin Crum likely needs to add weight to his skinny frame to endure NFL hits. He displays good contact balance and can change direction with ease in the open field with a good feel for pursuit angles, though does not operate in traffic particularly well.

Shows pinpoint short accuracy when throwing in rhythm, placing the ball well in tight windows away from defenders. When pressured or made uncomfortable in the pocket, he can tend to push shorter throws, which can affect his accuracy. He shows good touch on the deep ball, with good confidence in his arm and can drop it in over the top. Did not display much of an intermediate passing game over the middle but can hit longer curls and comebacks well.

Solid arm strength, showing a range of at least 50 yards. Gets the ball out with a very quick release on underneath throws and good release time on the long ball. When feeling pressured, he does not always follow through, which can hurt his range and accuracy, but generally throws a nice ball.

An aerospace engineering major, Crum has the intelligence to read the defenses well pre-snap and has a knack for knowing where the ball should go before the play begins. He does not show an ability to make full field reads during the play, tending to get flighty when his first or second read is not there, and can struggle to keep his eyes downfield when escaping the pocket. After being pressured and thrown out of rhythm, he can be indecisive and relies too much on his legs. One thing he does very well is limit mistakes, as he knows when not to throw the ball, only committing 2 INTs in 2019.

Crum is a tough competitor, willing to hang in the pocket and take a shot if it means he can help the team. He fights for extra yardage in the running game and is even willing to block for his teammates. He appears to be a strong vocal leader in the huddle and his team rallies around him.

Crum is an athletic, accurate QB who is a tough competitor. He has the most success when reading the defense pre-snap and finding the holes on quick routes or taking downfield shots. His skinny statue, limited ability to make full field reads, and lack of eye discipline when pressured may limit his ceiling, but he has the accuracy and arm strength to make the majority of next-level throws and can pick up yardage on the ground when need be.

Crum’s combination of accuracy, toughness, and athleticism make him an intriguing NFL prospect. Without improved eye-discipline and an ability to go through full progressions, he will likely be a high-upside backup at the next level. Look for him to be an early to mid-day 3 selection.