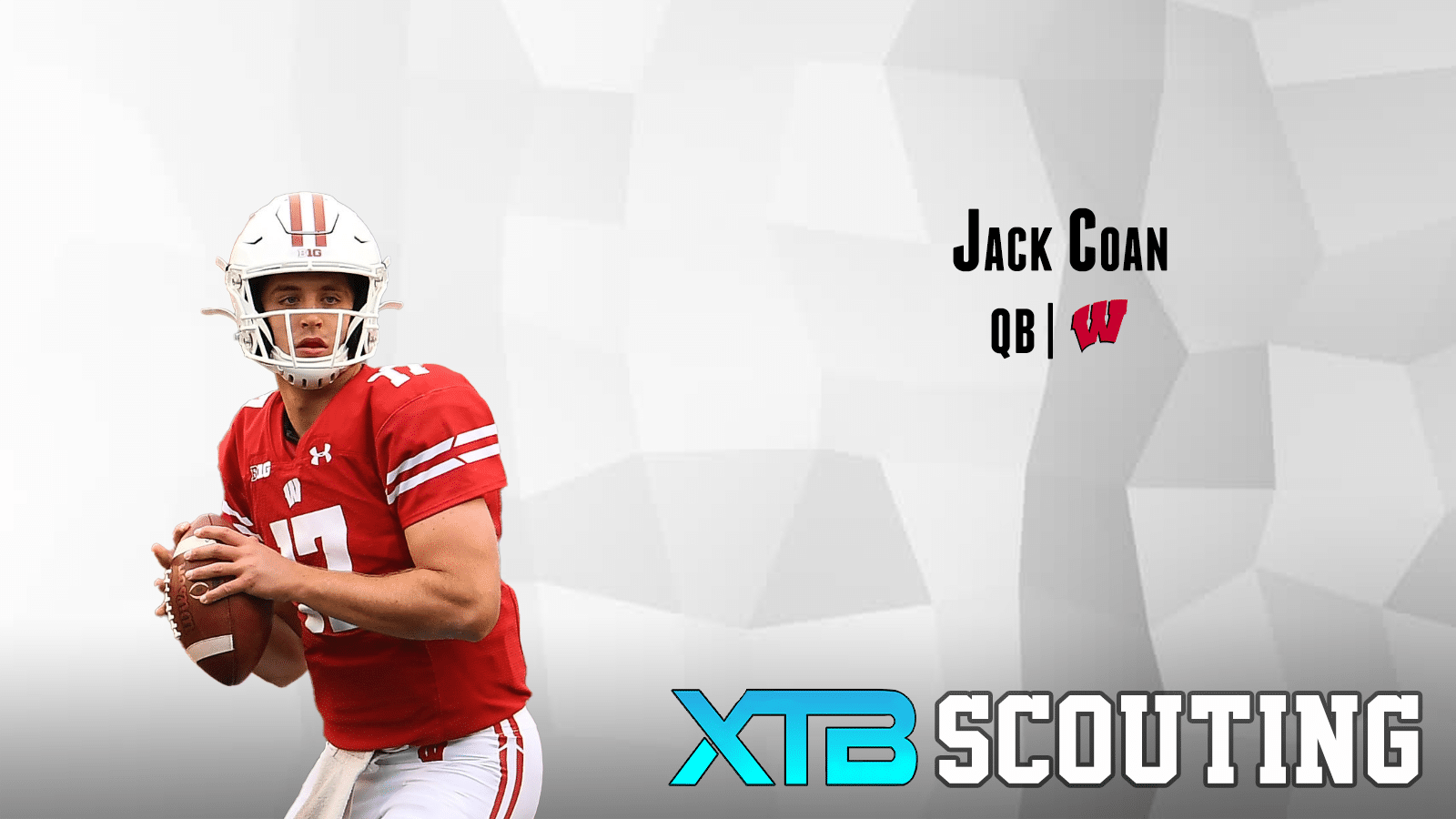 Jack Coan has average athletic talent for a QB. Not a statue in the pocket, but also not a consistent threat in the running game. He shows good aggressiveness as a runner near the goal line, but has questionable balance navigating traffic as a scrambler.

Shows good accuracy on throws that are in rhythm, especially between the hashes. When he’s not pressured, he can place the ball well into small windows away from man coverage underneath and has good touch on fade routes. His accuracy on sideline routes can be inconsistent and he tends to rush throws under pressure, not following through his motion which negatively impacts his accuracy. When having to re-set his feet, he has a small hitch in his step which can cause him to throw behind the receiver. He functions best on quick timing routes overall.

Above average arm strength with a quick release and good velocity on his sidearm throw. His ball can die a bit when making long sideline throws and he can struggle to put the ball up past 45 yards. On his deep throws, he has a small loop in his motion which can allow the ball to be stripped.

Very conservative with his decision making, almost to a fault. The majority of his throws were one read plays or dump offs underneath. While this allowed him to get the ball out quickly and prevent mistakes, he would often pass up bigger gains even with a sound pocket. He showed some ability to go through progressions, mostly on scripted plays, but would often force the ball to his primary receiver or check it down. Does not show an ability to navigate the pocket and make things happen under pressure, panicking and forcing dangerous throws or bailing out underneath.

Coan played very conservatively last season, which makes sense with a someone like Jonathon Taylor in the backfield. The definition of a game manager, he thrives throwing short timing routes and dumping the ball off underneath. Not much of an improvisor or playmaker when things break down, he provided a steady presence to stay on schedule when Wisconsin decided to pass. With his ultra-conservative approach to the game, his ceiling is likely a low-end backup at the next level.

Unless he can impress and show more explosiveness as a playmaker this season, Coan will likely be drafted in the late rounds if at all. Don’t be surprised to see him as a PFA.

With the departure of Jonathon Taylor and a full year of starts under his belt, will Coan be given more offensive freedom this season? If he thrives with a bigger offensive role, it could go a long way towards helping his draft stock and could help Wisconsin get back to the Big 10 title game.