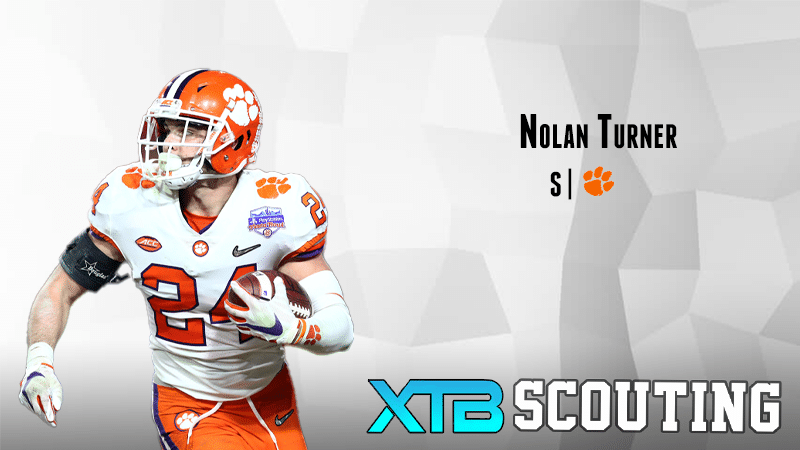 Nolan Turner has solid agility and foot speed to navigate around picks underneath with the balance and footwork to flip his hips well in man coverage. Lacks elite change of direction ability which limits his ceiling as a true deep coverage safety.

Mostly playing in nickel and dime situations, Turner was most effective playing underneath zone, where he could react quickly and flow between routes. He can fixate too much on the QB’s eyes, especially when in deep zone and struggles with play recognition, consistently biting on play action. When playing deep zone, he tends to drift and does not trust his foot speed, afraid to be beaten over the top, which limits his ability to close and make plays in the secondary. He should not be used as a deep zone defender at the next level due to his lack of awareness, reaction time, and elite foot speed. He does show an ability to break down in the open field and make saving tackles when he is the last line of defense.

A capable man coverage defender against RBs and TEs, Turner was largely tasked with covering Clyde Edwards-Helaire during the National Championship, and did so well. He has quick feet to mirror, backpedals well to protect his leverage, and closes well in man. He can navigate around picks well and has the foot speed to stay with faster backs. He shows the timing to jump routes and come up with interceptions as well, with solid ball skills. Generally a solid tackler, he can tend to dive and miss tackles, lacking elite change of direction to match up after the catch.

A solid run defender, he has the ability to shed WR blocks and comes up aggressively against the run, though can be slow to identify the threat. He can be hesitant when going up against bigger blockers and tends to tackle high near the line of scrimmage, allowing extra yardage after contact. He does show the awareness to stay home and set the edge in run support and has a good motor to pursue downfield.

Turner was the third safety for Clemson who would come in as a big nickel defender. He operates best in underneath zone or when matched up with RBs or TEs in man. He should not be trusted as a deep zone defender due to his lack of confidence, awareness, and foot speed. This very specific role and his lack of elite traits make him a low-end safety prospect at the next level.

With his lack of awareness and elite traits in such an important position, Turner will likely fall out of the draft barring a good showing this season.

Can he show an improvement in awareness as a deep safety? If he can show NFL teams he can be trusted on the back half, Turner could hear his name called on day 3.