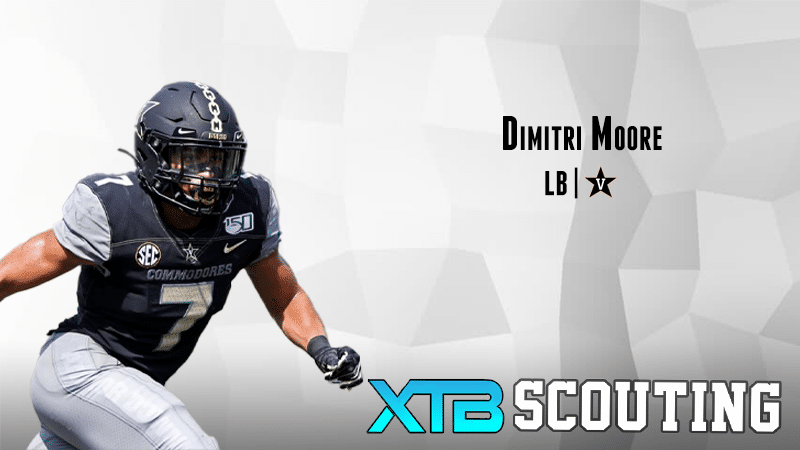 A smart and athletic off ball linebacker with a history of production, that plays with good mentality and toughness

Dimitri Moore enters his fourth year in Nashville after leading the Commodores in tackles in 2019 with 99 total stops.  He saw action in all 12 games on Vanderbilt’s schedule, logging 9 consecutive starts after being named to the SEC All-Freshman team in 2018.  As an off-ball linebacker in the Vanderbilt 3-4 defense he goes up against some of the toughest competition college football has to offer week in and week out. The former 3-star prospect will look to help the Commodores create some chaos in the SEC, and help his own draft stock in the process, as the Covid shortened season progresses.

– Overall man coverage ability. Receivers and quicker backs can give him issues
– Will occasionally sit back on his heels in zone coverage
– Block shedding can be a chore and has trouble breaking free from lineman
– Production when blitzing is merely sufficient
– Tendency to play with a high pad level and give up leverage against both blockers and ball carriers
– Tackling form and hit power are sub-par on most plays, but flashes the good
– On ball production and generating turnovers

Moore has tools that can allow him to carve out a role as a backup Will linebacker at the next level. He can fit in both a 3-4 and 4-3 scheme with his overall athletic ability, but will fit best in a 3-4 where the DL has 2-gap responsibility to keep him free from opposing linemen.  He does not offer much position versatility to move outside due to his troubles generating pressure when he does blitz.  His athleticism and mentality lend themselves well to special teams, which will be key for him to remain on rosters.  Teams looking o add some depth to their linebacker room will find him available on Day 3.

Moore will need to sure up block shedding in order to generate more overall production in terms of tackles. In doing so he will need to exhibit more consistent form tackling and create more turnover opportunities. Playing with a lower overall pad level and not giving up leverage will be key in order to do so. Working on his coverage ability and being more consistent in pass defense can only help him. Becoming a more effective blitzer to improve his ability to disrupt both the run game and the pass game will be something to keep an eye on as well.