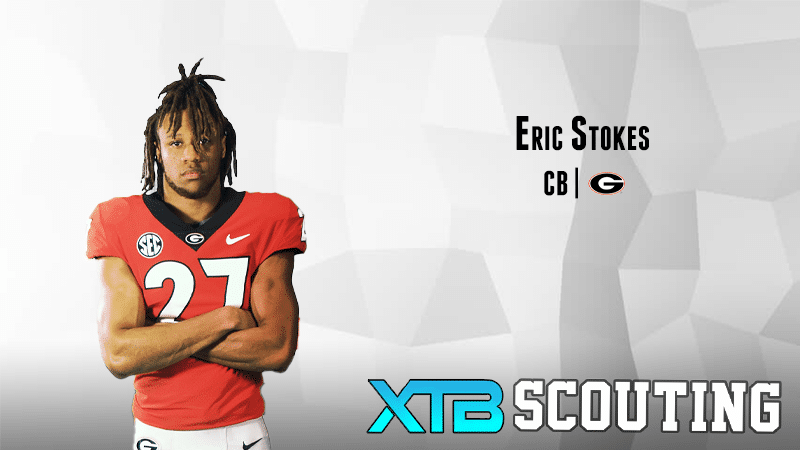 A fast and athletic outside corner with good length for the position, press coverage ability, and a high football IQ.

Eric Stokes is enters the 2020 season with a chance to prove he belongs towards the top of NFL draft boards. As a corner in Kirby Smart’s 4-3 hybrid scheme, he has experience playing both zone and man coverages.  He has played in all but one of the possible 28 games during his time in Athens, and took the mantle of full time starter in the 2019 season when he earned 2nd Team All-SEC honors. The former 3-star recruit will look to prove he belongs with the big dawgs in the NFL as he goes up against the best the SEC has to offer in 2020.

– Fluid hips and good footwork in his backpedal
– Speed to keep up with receivers and stay in phase
– Good route recognition and ability to mirror and match receivers movements
– Not afraid to be physical with receivers throughout the play
– Can throw off receivers at the start of the play with a solid jam while in press
– Disruption at the catch point
– Long frame that he can use to his advantage and has room to build upon
– Good football IQ. Understands the scheme and where his help is

– Turnover production. Needs to do a better job of converting the opportunities he creates
– Will occasionally get caught flat-footed in coverage
– Needs to be more fluid and consistent in his block shedding
– Is more of a drag down tackler than a form tackler
– Plays almost exclusively on the outside, but has some experience in the slot

– Did not finish 1 game in 2019 with a minor injury but did not miss any significant time.

Stokes projects as a capable starting outside corner at the next level. His time at Georgia gives him good experience playing in both zone and man coverage, and his best fit will be with teams that like to utilize press corners. His athletic ability and physicality can transfer inside to the slot/nickel role, but his lack of significant experience doing so leaves that as more projection than certainty. Teams that have holes in their secondary will see him as a good option to plug those holes, and will likely find him available in the early stages of Day 2.

The primary area to improve upon for Stokes is converting opportunities into actual turnovers, and thus having an even bigger impact upon games than he already does by simply breaking up passes.  Adding good muscle weight onto his frame without sacrificing speed will also be beneficial to his game, as it will allow him to be even more physical in press and can help him shed blockers more effectively. It will also help him to deliver more decisive hits instead of dragging ball carriers down.  Stokes will most likely not be targeted much as the Bulldogs top corner, so he will need to make the most of what opportunities he does get to make plays.