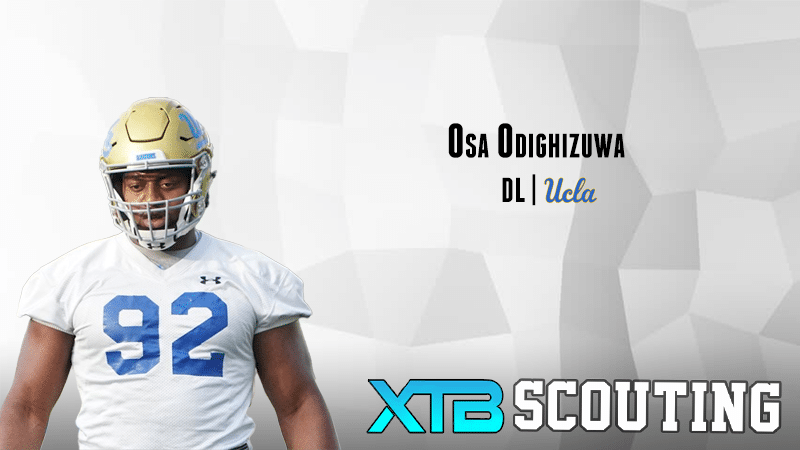 Osa Odighizuwa came to UCLA as a 3-star recruit and earned a starting spot four games into his redshirt sophomore year. In Pasadena, the defensive lineman has put up some impressive numbers against the run with 90 total tackles – 21.5 for loss – but has only managed to accumulate 7.5 sacks in 30 career games. However, his low sack total could be a result of not having a defined spot along the line, as the Bruins used him anywhere from a zero- to a six-technique in their 3-4 defensive system. The Portland native is best as a three-tech defensive tackle where he can use his quick get off, impressive play strength, and pass rush motor to be a disruptive force as an interior defender.

– With one-gap assignments, he has a quick get off to get penetration and play in the offense’s backfield
– His good initial quickness, play strength, and hand placement on the chest of offensive linemen allow him to effectively get pressure with a bull rush
– Works to get on an edge when pass rushing and has a good rip move, consistently finishing it thumb to tap
– Shows good quickness and change of direction to have an effective inside stick move if he gets his hand timing down
– Relentless pass rush motor to get coverage sacks
– Against the run, he plays with low pad level and has impressive play strength to hold his ground against double teams and displace offensive linemen in 1 on 1 situations
– When slanting, he gets skinny to defeat blocks and be in a position to make plays at or behind the line of scrimmage and has the play strength and balance to avoid getting washed against down blocks
– Sure tackler who can knock running backs backward at the point of contact
– Displays good effort and angles in pursuit to factor into gang tackles down the field

– Slow off the ball when moving laterally off the snap on line games or when the outside linebacker drops in coverage
– Adequate agility to get pressure and be an effective looper on stunts
– Late timing with his hands in pass rush as he constantly misses with his initial chop, limiting his pass rush repertoire
– Lacks ankle flexibility, limiting his bend when rushing on the outside
– False steps when 2-gapping, making him susceptible to lose ground initially
– On the backside of gap runs, he struggles to recognize when the offensive lineman he’s lined up in front of pulls, leading to a tendency to overrun the play in the backfield
– When 2-gapping, he struggles to locate the running back and recognize which gap to shed to

While Odighizuwa has some top-tier qualities, his draft stock may be hindered by a handful of factors. For one, defensive tackles have a relatively low positional value which directly impacts their draft stock. Also, Odighizuwa is heavily reliant on his strength to create pressure which typically, does not translate as well to the next level compared to someone who wins with finesse. However, the defensive lineman’s ability to win with power and be an effective run defender is enough to peak the interests of any team that uses a 4-3 scheme and is looking for a three-technique. Currently, he projects as a Day 2 pick who could go anywhere from the end of the second-round to the third-round.

Unfortunately, it’s a real possibility that Odighizuwa won’t play in 2020 since the Pac-12 has already suspended its season. That will hinder his ability to climb up draft boards as he needs to show better timing with his hands to increase his pass rush arsenal. The Bruin has very few flaws as a run defender but needs to show more as a pass rusher to insert himself into the first-round discussion.