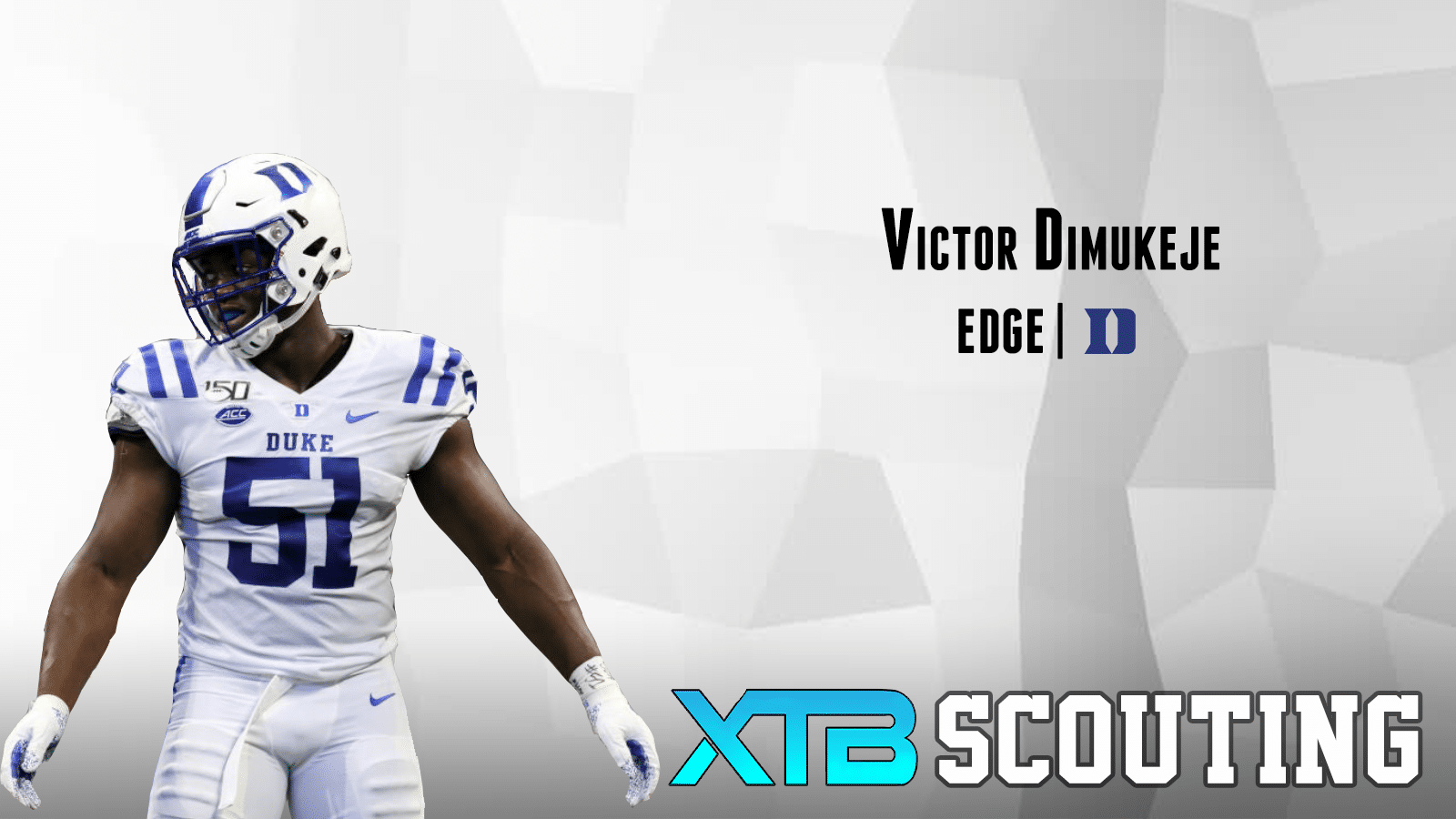 A stocky defensive end who wins with speed, athleticism, and an exceptional motor

Victor Dimukeje has been a force on the Blue Devil defensive front from the moment he stepped on campus in 2017. Not only has he played in all 38 possible games, but he has started every single one at the defensive end position in multiple fronts. After his first season, he was named first team Freshman All-American by ESPN and led all ACC freshman in TFLs. He has a history of good production, having never failed to accumulate at least 40 tackles, while his havoc play numbers have steadily risen each season. He enters the season 9 sacks short of the Duke career record with, and if he can continue the improvement shown so far in his career he will get there in 2020. The former 3-star recruit with over 2,000 snaps under his belt will be a player to keep an eye on as the season progresses.

– Uses speed to beat tackles around the edge
– Excels at executing stunts due to his athleticism
– Lower body flexibility allows him to get good bend when turning the corner
– Good single arm chop to keep opponents hands off
– Rips through opponents blocks with inside arm around the corner. Great combo with his single arm chop
– Sets the edge well vs reach blocks and turns ball carrier back inside
– Exhibits good discipline against read option
– Mismatch when going against TEs both in pass pro and the run game
– High motor player who is relentless in pursuit

Dimukeje has the athleticism and skill set to be a nice backup edge piece at the NFL level. He has some experience starting out in a 2-point stance, but spends the majority of his time with his hand in the dirt as a 5-tech DE that bumps to a 6- or 7-tech against TEs. He will fit nicely as a 5-tech in both even and odd alignments thanks to his experience playing in multiple fronts at Duke, but his best fit is in a 4-3 scheme due to his slightly smaller stature. Teams looking to pick up a solid backup to bolster their pass rushing depth should be happy to pick him up on Day 3 in 2021.

If Dimukeje can continue to improve his numbers at the same rate from his first three seasons, he will be in for a special 2020 season. Becoming the top man on the career sacks list will help him send a message to NFL front offices. He will need to exhibit more of a plan when pass rushing, and consistently show a deeper move set with more power and counter moves mixed in. A more explosive start to the play with a better get off and initial punch will help as well. Sustained hand fighting and smooth block shedding have been a struggle for him in the past, so watch for improvement in that area. If he can put together a good season with the same level of improvement he has previously shown, don’t be surprised when his name rises up draft boards.