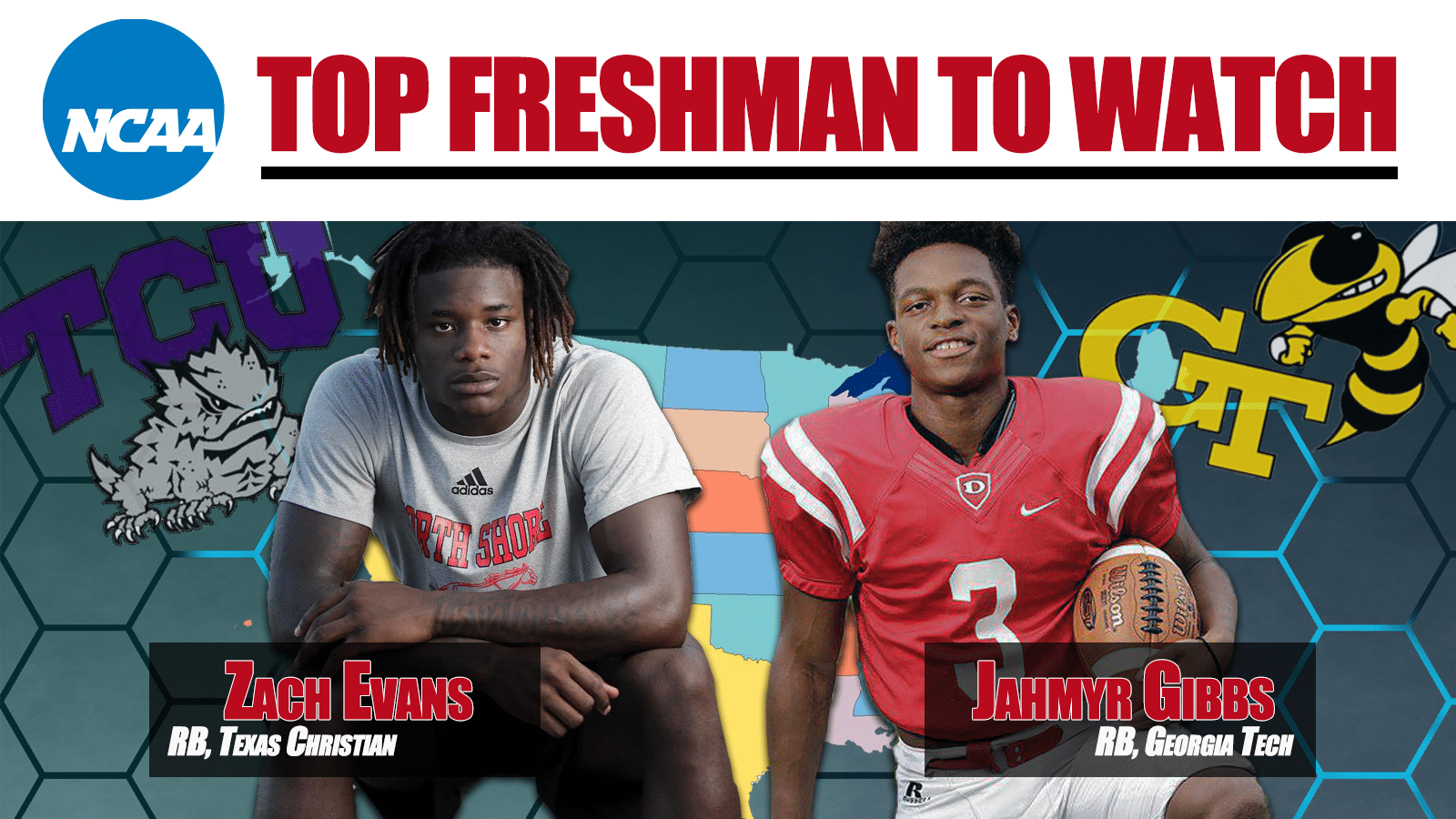 College football rosters typically revolve around seniority rather than open competition. Typically, freshmen don’t see the field unless they are the creme of the crop. This group of top freshmen should be showing immediate promise this season as these are some of most talented and heralded players nationwide who also find themselves on favorable depth charts.

Zach Evans had every school in the nation clamoring for his services, as he was a standout performer at Texas powerhouse North Shore. While Evans did garner nationwide attention and accolades, he did not make his recruitment an easy process as the University of Georgia can attest too. Evans originally committed to Georgia but was later released from his national letter of intent.

Despite the top freshman’s release many teams were still vying for his services and he ultimately chose to stay in state with Texas Christian University.

Evans enters as TCU’s most highly rated recruit in team history. The departures of running backs Sewo Olonilua and Darius Anderson to the NFL Draft means Evans is entering an ideal backfield situation without an entrenched starter. He is hands down the most talented player in the TCU backfield. The tutelage of Gary Patterson and a few years as the featured option could help Zach Evans regain the national spotlight, this time at the collegiate level.

Evans could be the most exciting player in TCU’s backfield since LaDainian Tomlinson.

History is the best predictor of the future, and that is why the Boilermakers find themselves on this list. Going back to Rondale Moore’s freshman season in 2018, the Boilermakers have shown a recent propensity to feature freshman in the offense. When Moore was injured during the 2019 season, 4-star freshman David Bell became the number one wideout for the Boilermakers and rewarded them by winning Big Ten Freshman of the year.

Fast forward to 2020 with a healthy Rondale Moore, David Bell, and incoming freshman Maliq Carr. This group is bound for big numbers. Maliq Carr is the latest 4 star receiver to join Purdue and presents himself as the most physical target (6’5″, 225 lbs.). Carr is a two-sport athlete and will be playing football and basketball for the Boilermakers this fall (assuming sports take place).

His film shows a big-bodied target with a knack for making contested catches in traffic. While Carr isn’t a burner, he possesses strong hands and a big frame to box out smaller cornerbacks and he has a complimentary skill set to Moore and Bell. A move to tight end could also be in the works as he is still filling out his massive frame.

Continuing the trend on offense, Rakim Jarrett is a name to know. He is the definition of a home run hitter as a receiver and presents a threat to score every time he touches the ball. Jarrett was rated as the number two receiver in the nation last year, so many teams were battling for his commitment. Jarrett was actually influenced to commit to Maryland by former freshman phenom Stefon Diggs.

Listed at 6’0″ and 193 lbs., Jarrett is already physically developed enough as an athlete to make a day one impact for the Terrapins who have also put a lot of trust in freshmen. A quick look at Jarrett’s film shows elite burst and acceleration at the receiver position. Jarrett is the crown jewel of coach Mike Locksley’s 2020 recruiting class and there’s only a couple months to go until the nation understands why.

Maryland still is figuring out the future of the quarterback position but whomever ends up the starter they will be more than equipped with Jarrett as one of their receiving threats.

Georgia Tech has been quietly accumulating talent under Geoff Collins’ watch. While the Yellow Jackets did struggle changing over to a spread system the antithesis happened on the recruiting trail for Collins. Not only did Collins secure one of the top dual threat backs in Jeff Sims, he managed to get a major win in state by securing Dalton, Georgia native running back Jahmyr Gibbs.

Looking at his film, it is clear to see that he is a fluid athlete with top tier vision and cutting ability. Gibbs averaged a mind boggling 11 yards per carry rushing for over 2,500 yards and 40 TDs as a high school senior. The Yellow Jackets finished as a bottom ten team in points per game last year with struggles most notably at the QB position. The GT starting quarterback position last year completed less than 50% of attempts and it severely limited the offense.

While Jeff Sims is still developing in his own right as a passer he will be able to fall back on his athletic ability as he is a true dual threat quarterback; he committed to the Yellow Jackets understanding that he has a chance to play immediately. With Miami wide receiver transfer Marquez Ezzard now eligible, as well as former 5-star linebacker Antonneous Clayton on board this Georgia Tech offense has a multitude of players looking to contribute this year.

With the season fast approaching these players will need to impress early and often, but most of them have a track record that puts them as some of the top freshmen to watch in 2020.