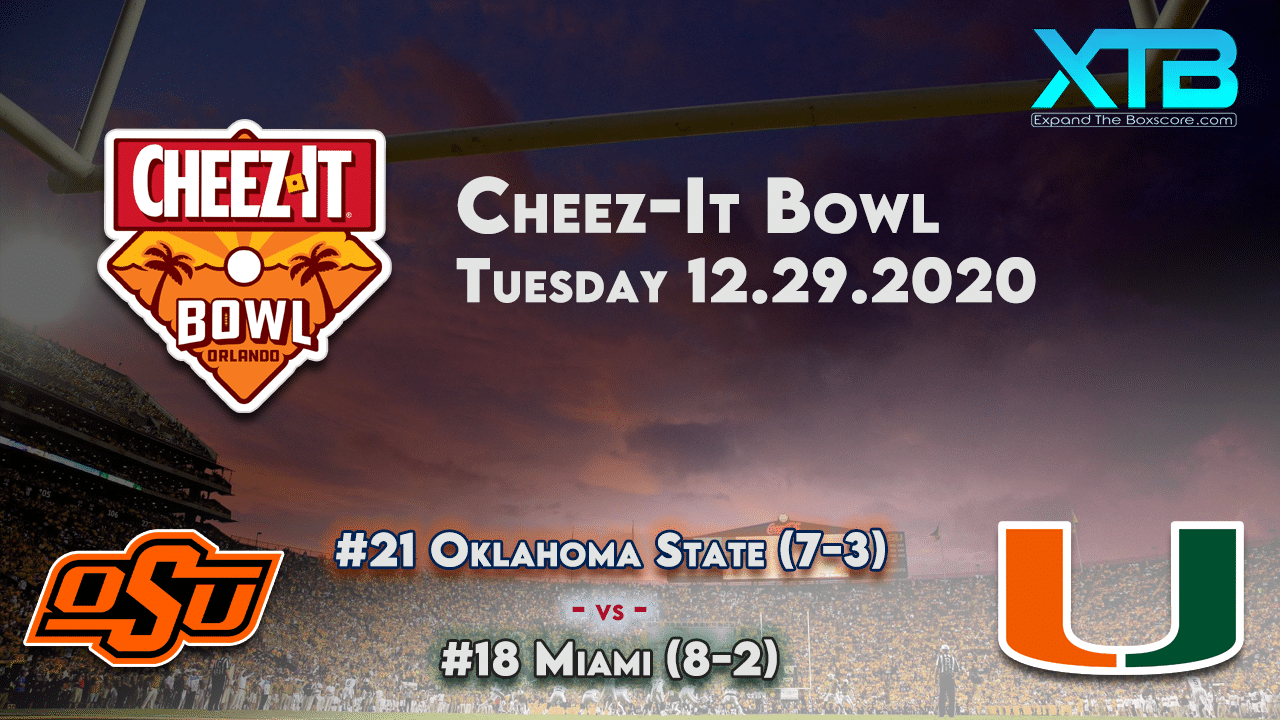 As a part of Expand The Boxscore’s NFL Draft coverage, we will be highlighting the draft prospects from each school for every bowl game. The players featured below will also be included in our NFL Draft Guide, which is set to release shortly after the combine. In today’s column, we will be taking a look at the Cheez-It Bowl, featuring the Miami Hurricanes and Oklahoma State Cowboys.

In what is become an annual tradition, it looked like Miami was back at the beginning of the season. Then they lost to Clemson, and just when it felt like Canes were back (again), they got demolished by North Carolina. I like to call it the annual is Miami back roller coaster ride.

Nonetheless, an 8-2 record with a chance to finish with nine wins is nothing to scoff at for the Hurricanes and a large reason for that is the play of their NFL Draft prospects.

Miami’s most notable prospect who will actually be playing tonight is tight end Brevin Jordan. As a dynamic athlete with a well-rounded game, Jordan has the potential to be a late first- or second-round pick. Heading into this year, his biggest issue was a lack of consistent production.

With a much more stable quarterback situation Jordan has managed to rack up 30 catches for 480 yards and five touchdowns in just seven games.

At safety is Bubba Bolden who has good range, can cover slot receivers man-to-man, and provide run support. The problem is he only played in 10 games before this season and has a checkered past that includes off-the-field issues and injury concerns. That is holding back his NFL Draft stock as Bolden currently projects as a third-rounder.

Manning the middle of the defense is run-stuffing linebacker Zach McCloud. He is a physical downhill run defender who is a sure tackler, but he needs to improve athletically to become more effective in coverage and to increase his current Day 3 draft projection.

Miami also has three edge defenders who will not be playing in the bowl game but will likely be Day 1 or 2 picks in Gregory Rousseau, Jaelen Phillips and Quincy Roche.

Oklahoma State began the year with hopes for a Big 12 Championship, but a few late-season losses to Texas, TCU, and in-state rival Oklahoma ruined the Cowboys’ chances. Instead, they sit at 7-3 and it feels like they are a program that will just never get over the hump.

On a less somber note, OSU does have several players to keep an eye on tonight.

Wide receiver Tylan Wallace is an offensive weapon for the Cowboys. Wallace has very strong hands, excels in contested catch situations, and is a physical runner after the catch. He will likely be a Day 2 pick and needs to show more ability to create separation if that is going to change.

In the trenches is Josh Sills, who has long arms to lockout defensive linemen in pass protection and has the motor to finish blocks with defenders on the ground. He does tend to let his pad level slip as the game goes on and struggles working up to the second level, which is why Sills is a projected late Day 3 pick.

He was granted a medical redshirt for the 2019 season and with the NCAA’s COVID-19 eligibility rules, the big man might end up returning to school.

Next to Sills is Teven Jenkins, a potential third-round pick. At 6’6″ and 310 pounds, Jenkins has the ideal size and frame for an NFL offensive tackle to go along with a stout anchor in pass protection and some nastiness to finish blocks in the ground game. The problem is he was not asked to execute a lot of vertical sets in college and has some technical issues that he needs to clean up because those will get exposed at the next level.

On defense safety, Kolby Harvell-Peel is another notable name for OSU. Harvell-Peel can play in the box to provide run support, but he struggles in man coverage against more agile slot receivers. Unless he cleans up his coverage skills, he will likely be a third or fourth-round pick in the NFL Draft.

Patrolling the perimeter for the Pokes is an early Day 3 prospect in Rodarius Williams. The cornerback understands how to use his length to be effective in man coverage, but he is slow to react to short or underneath routes and seems to play with a fear of getting beat deep.

Oklahoma State running back Chuba Hubbard opted out of the bowl game but will likely be a fourth-rounder.