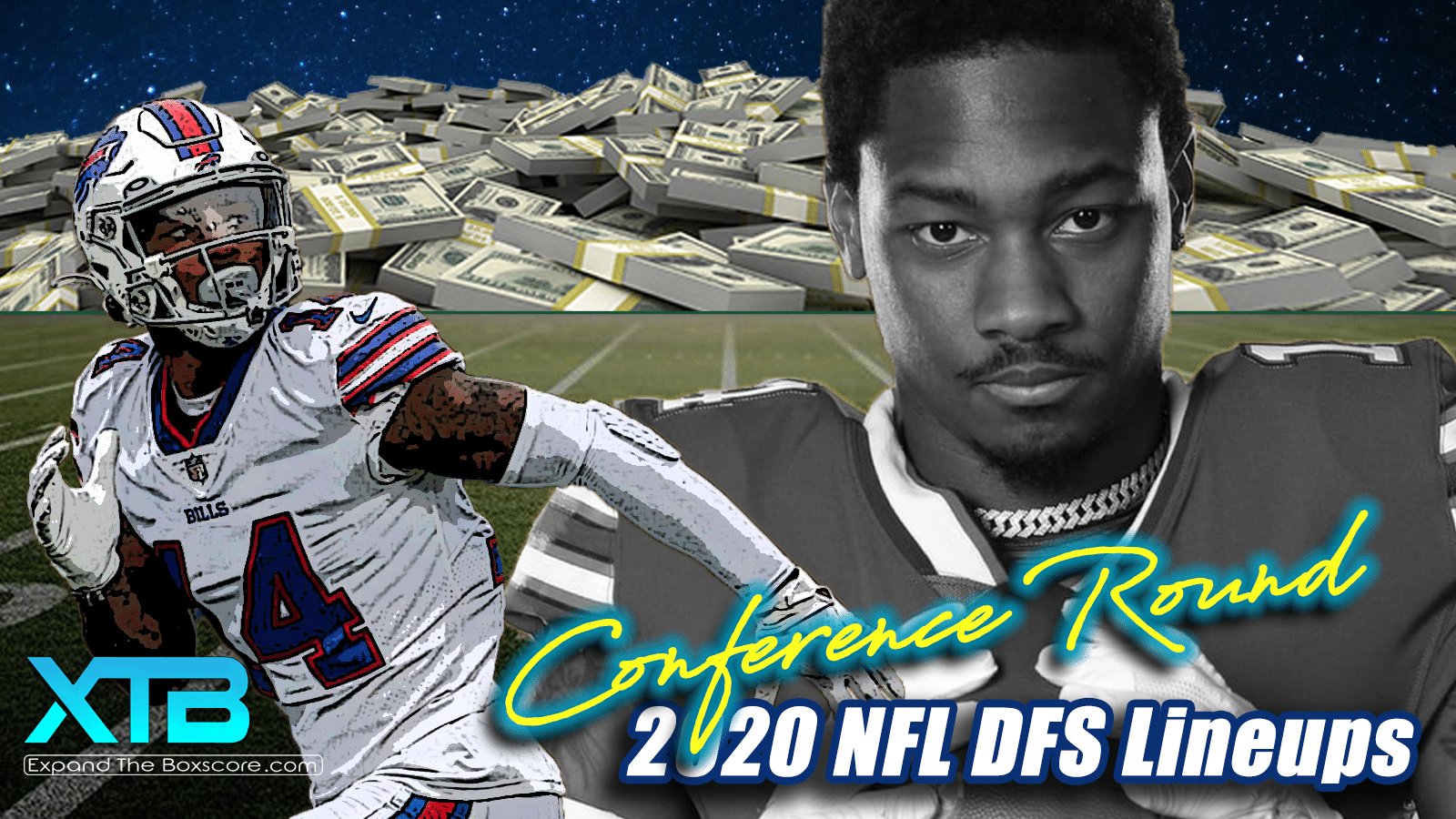 Conference Championship weekend has arrived and with it comes one particular matchup that must be exploited. A chance to go to the Super Bowl is on the line and I cannot wait to go all in on this one.

All of my success this season is all thanks to the XTB DFS Tool. It has everything you need from player salary to projected point totals for each and every player. It really is a game changer for all DFS and fantasy football players alike.

Buffalo Bills wide receiver Stefon Diggs is my DFS play of the week for Conference Championship Sunday. Sunday evening’s AFC Championship game between the Bills and Kansas City Chiefs is poised to be one of the best games of the 2020 NFL season.

Diggs in particular is set to have another huge DFS playoff performance as the connection between he and Josh Allen has yet to be stopped so far this post season. In his two playoff games so far, Diggs leads all receivers with 234 receiving yards and is averaging almost 17 yards per reception. Diggs averaged just over 12 yards a catch in the regular season.

I love the matchup with Kansas City’s secondary this week because as of late they have shown to be vulnerable against receivers with dynamic speed on vertical passing plays. Against Cleveland last week, KC’s secondary was beat on several occasions on throws 20-plus yards down the field, but were bailed out by a few questionable calls by the referees.

In their Week 5 loss against the Las Vegas Raiders, Kansas City gave allowed passing plays of 20 or more yards with two of them going for 50-plus yard touchdowns. Kansas City may have a couple of All-Pro players on their defense, but by no means are they unstoppable; that secondary is a weakness that Diggs and the Bills offense will exploit.

Josh Allen and the Bills passing attack are as aggressive as they come and they will be throwing deep shots to Diggs as much as they can. The Bills are no strangers to scoring points this year as they were third in the league in points scored at a hair over 30 points per game. Diggs was one of the biggest contributors to that as he is the first player in NFL history to have 17 games of at least six or more receptions in a single season.

Diggs has been the weapon this offense has lacked the past couple of seasons. For Buffalo to keep up with the lethal Patrick Mahomes and Chiefs offense, they will need to keep their foot on the gas and get the ball into Diggs’ hands as often as possible. Buffalo will not shy away and will continue to air it out throughout the game as their running game has been suspect all season, carrying into the postseason.

Buffalo’s running backs are averaging 35 rushing yards per game in the playoffs, which has forced Buffalo to be virtually one-dimensional on offense. That poor of a running game can be the downfall of some teams but for Buffalo, it has given more opportunities for Josh Allen to find Diggs in the passing game.

Diggs is currently getting almost a 30% target share in the playoffs and I expect that number to rise against Kansas City. Watching opposing defenses these past few weeks, most defenses have played off coverage on Diggs and are giving him room on the short-to-intermediate routes to prevent being burned deep. Even with that happening, Diggs has still found a way to have multiple 30-plus yard receptions.

When the deep shot plays are not there, Diggs is just as lethal on yards after the catch. Against both Indianapolis and Baltimore he took a couple of 5-yard hitch routes for gains of 20 or more yards. For the regular season, Diggs averaged 7.9 catches and 95.9 receiving yards per game.

I believe Buffalo will beat the Kansas City Chiefs on the back of Stefon Diggs and return to the Super Bowl. Diggs will light up the scoreboard one more time in this one as he is going off for double-digit catches and 150-plus yards and multiple touchdowns. Get Diggs in your DFS lineups because you do not want to miss him carry you to victory on Sunday.