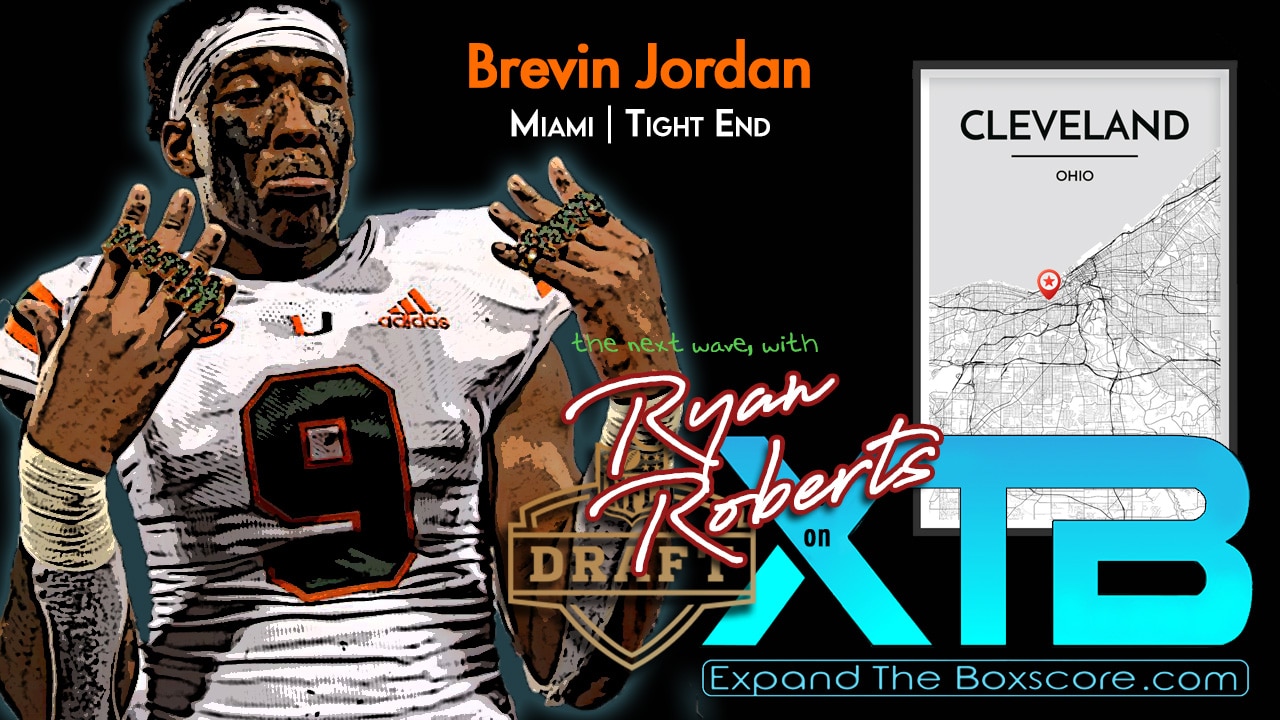 Designating colleges as the premier factories producing NFL talent at various positions is a conversation we’ve had since the beginning of time. The back and forth banter, citing examples, and staking subjective claims is one of sports great pastimes. When talking about the rightful declaration for “Tight End U”, the University of Miami is on the shortlist of the conversation. From the Year 2000 until 2010, it’s hard to argue. In those ten seasons, four Hurricane Tight Ends heard their name called in the first round of their selective drafts, including Bubba Franks (Green Bay Packers), Jeremy Shockey (New York Giants), Kellen Winslow Jr. (Cleveland Browns), and Greg Olsen (Chicago Bears). 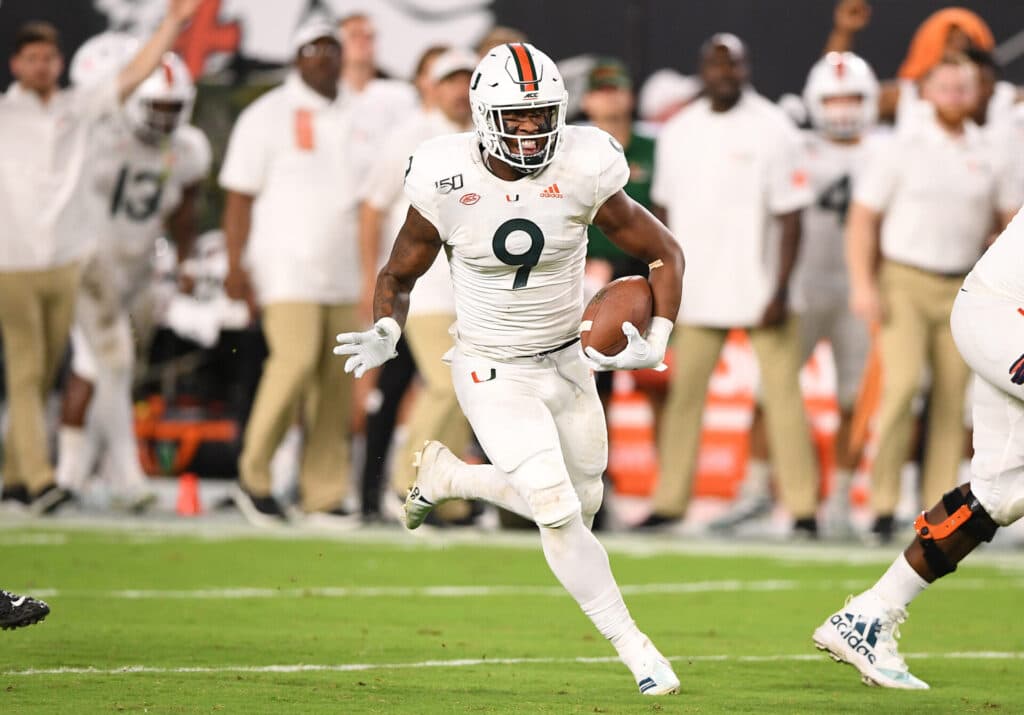 Judging from the list, the track record during that time was nothing short of fantastic, combining for eleven total Pro Bowl designations between the four. Of the other two Tight Ends selected in the first 100 picks, the former Hurricane hooper Jimmy Graham has been chosen to five Pro Bowls of his own. Since Graham was selected in 2010, the position has had less than spectacular results. Most recently, David Njoku was selected in the first round (29th overall) of the 2017 NFL Draft. Njoku has struggled to catch his footing with the Browns, struggling with injuries and inconsistencies during his four-year career. Still, the culture surrounding “The U” has a way of attracting some of the best talents around the country, especially from right in their backyard in the Sunshine State. The new hope to reverse the Tight End fortunes at the school, 2021 NFL Draft prospect Brevin Jordan, chose Miami despite playing his high school clear across the country at Las Vegas powerhouse Bishop Gorman. A consensus four-star recruit by every major recruiting service, and top-ranked tight end by ESPN and 247Sports, Jordan fell in love with the school from the moment he stepped on campus.

“It felt like family to me,” Jordan explained. “Not only that but I’m from (Las) Vegas… the city that never sleeps. Miami just felt like a hand in the glove.”

Creating an instant impact, Jordan would rewrite the record books for the Hurricanes. At a school rich in tradition, he would leave as the all-time leading receiver at the Tight End position in just about every category, finishing with 1,358 receiving yards and 13 touchdowns on 105 receptions. For a player who had such a positive impact on the program (in only three seasons), Jordan remained humble about his time with the Hurricanes.

“I didn’t even know about (the records) and I’m just blessed for the experience. It has prepared me to take this next step.”

For him, it was about establishing the culture back to what players like Warren Sapp, Jerome Brown, Ray Lewis, Ed Reed, Willis McGahee, Andre Johnson, and Sean Taylor had created.

“Manny Diaz is taking charge,” he disclosed with excitement. “He is a pure winner and he’s not playing around.”

For a player who had so much success during his just three-year career, it’s not hard to understand why making the jump made a ton of sense. Widely viewed as one of the Tight Ends in the 2021 class, a day two designation seems very likely for the talented pass catcher. With the program on the uptick, it did make sense to probe for a second what made now the correct decision. Again, it came down to a deep belief, this time in himself.

“For me, it was taking a chance on myself. I wanted to be able to help my mom and family.”

Soon, Jordan will be able to do exactly that. Joining an impressive Miami class, including potential first-round players in Defensive Ends Jaelan Phillips and Gregory Rousseau, he is a part of the rebirth of what has made the Hurricanes special. He intends to lay the foundation for a resurrection of NFL Draft prospects, but first, continuing his own journey. Now a part of a talented Tight End group including the likes of potential Top Ten pick Kyle Pitts (Florida), and talented pass catchers Patt Freiermuth (Penn State) and Hunter Long (Boston College), Jordan did not lack in confidence concerning his place in the class.

“I’m an all-round tight end… I can do it all,” Jordan explained. “People try to label me as a one-dimensional tight end and it irks me.”

The talent is obvious, evident by the production Jordan posted during his college career. When asking Jordan what type of player he is, he summed it up short and sweet.

Doubling as a running back after the catch, Jordan is the clear-cut top YAC weapon at the Tight End position in the 2021 NFL Draft. An explosive athlete in tight spaces, Jordan possesses extreme physicality for a player in open space. He routinely creates yardage after contact, breaking a ton of tackles for a tight end, while always falling forward. For a west coast centric team that prioritizes working laterally and creating after the catch, Jordan is the perfect fit.

Jordan has outstanding field awareness. He routinely finds the sticks after the catch, making himself extremely valuable on third downs and big money situations. Here, he is able to contort and fall forward for a big conversion. This is littered in Jordan’s film. The term “safety blanket” can be overused but for Jordan, it completely hits the mark. Big-time players make big-time plays… in big-time moments.

Yeah, you should probably cover him…

Jordan is a loose athlete who moonlights as a de facto slot receiver in the Hurricane’s offense the majority of the time. Here he has a clear understanding of blind spots, quickly whipping his head around and creating separation working down the seam. From there, the athleticism is shown off. As a detached Y, Jordan has the athletic skill set to present a difficult matchup for various second-level defenders in the slot.

Again, Jordan is nearly impossible to contend with in one on one situations. Here he works from an outside alignment, establishes inside leverage, and blows by the defender. From there Jordan shows off his next-level athleticism. He is able to work through contact and take it the distance for six.

Like many of the 2021 Tight End group outside of Kyle Pitts (Florida), Jordan has gone virtually unnoticed throughout the majority of draft season. He is a talented football player who presents matchup nightmares from varying alignments.

The Tight End position was booming for the Hurricanes program during the early 2000s. After a bit of stagnation in recent years, Brevin Jordan looks to buck the trend of underwhelming next-level pass catchers at the position. With his combination of athleticism and physicality after the catch, Brevin Jordan is a potential mismatch weapon in the passing game that offers a plethora of possibilities for an NFL team. For Offensive Coordinators who have a plan to maximize all of his talents, Jordan is a high upside gamble to take on Day Two of the 2021 NFL Draft.

The sky is the limit as he rounds out his game.