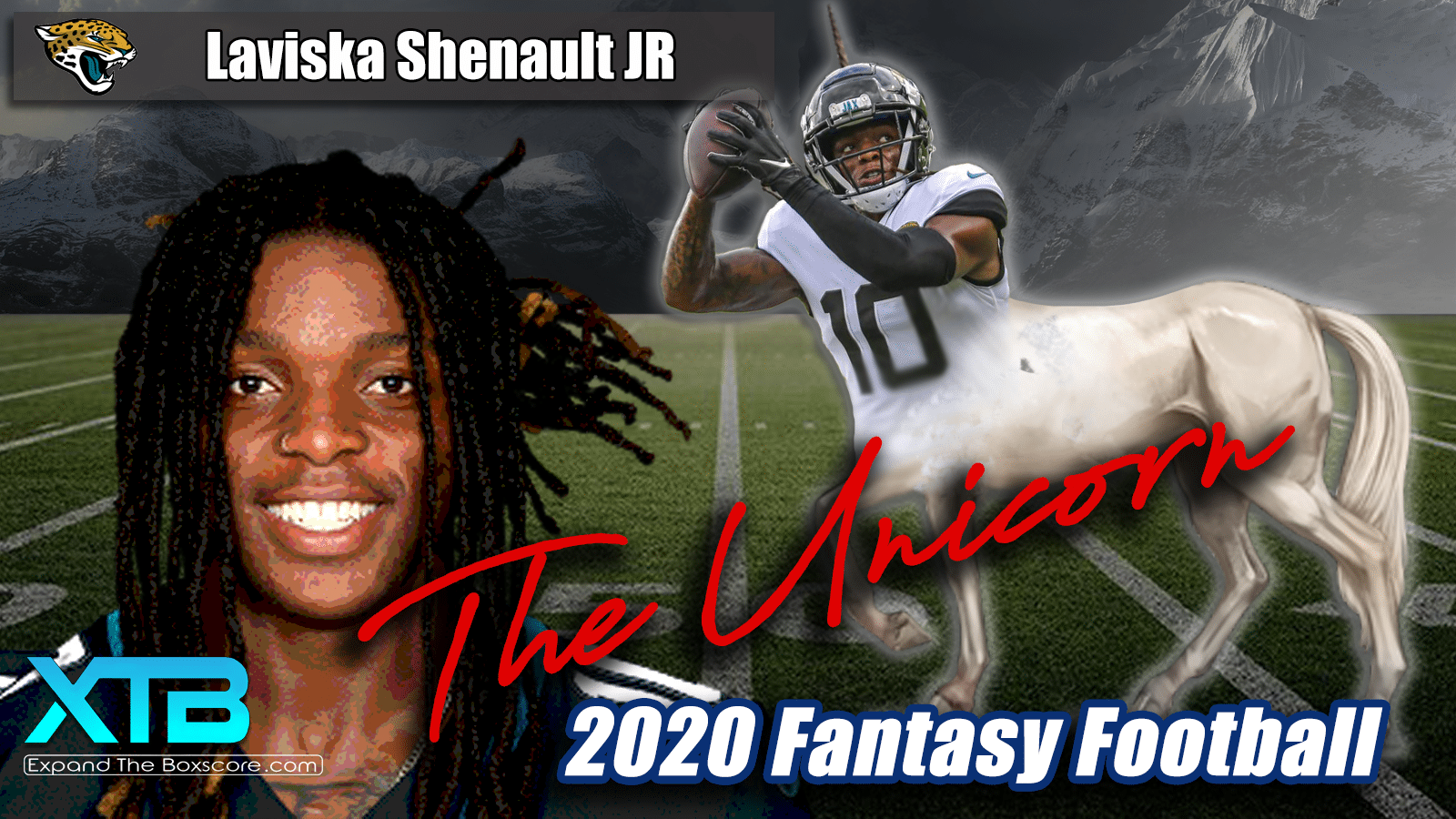 That was not the case and the Jaguars were able to secure him with their 2nd round pick. While much has been made about quarterback Gardner Minshew’s development this year, a surprising development has been the niche Laviska Shenault Jr. has carved out.

Volume is king in fantasy and real life. The Jaguars have catered plays to Shenault Jr.’s skillset and his involvement up to this point should lead to optimism for those rostering him as well as fans of his.

A glance into Shenault Jr.’s college film shows a raw physical receiver with home run ability at multiple alignments. Flash forward to the 2020 season and Shenault Jr. is being featured as just that. Week 1 against the Colts saw Shenault Jr. line up as a wildcat QB, split back, slot receiver, and outside receiver.

His final stat line from Week 1 was a modest two carries for 10 yards while also securing three catches for 47 yards and a touchdown on four targets. The numbers are not gaudy but what was encouraging is that Laviska Shenault Jr. is being used in a role almost identical to his days at Colorado.

Lining Shenault Jr. all over the field allowed the Jaguars to dictate matchups and they were able to move the ball freely against Indianapolis’ defense. Shenault Jr. excels at gaining yards after the catch and with Minshew placing second in release time Week 1 according to Next Gen Stats.

This is a match made in heaven for both of their playing styles.

Week 2 saw Shenault Jr. face off against the rival Titans with similar usage and similar results. Shenault Jr. rushed 5 times for 37 yards and accumulated another three receptions for 35 yards. Shenault Jr. faced a daunting front seven and was able to find success in a myriad of ways.

His best run of the day came on a 14-yard burst in the second quarter where LSJ was able to pull away from an unblocked Jadeveon Clowney, and at the end of the run he leveled safety Kenny Vacarro. The Jaguars got rid of Leonard Fournette only to feature a receiver who is just as physical.

Flash forward to the third quarter and you see a great example of timing and route-running by Shenault Jr. On 2nd and 8 he makes an excellent catch on a deep out that Minshew throws high. Shenault Jr.’s explosion off of the line gets the corner to open his hips early and he gets rewarded with the toe-tap catch.

As it stands Laviska Shenault Jr. has played 11 snaps in the backfield, 44 split out wide, and 19 in the slot averaging nine yards per touch. His next matchup is against a banged up Dolphins defense Thursday night missing its top cornerback.

The Dolphins run defense already leaves much to be desired, and combining that with D.J. Chark having a questionable injury designation for the week this could spell a breakout game for Shenault. He can be relied on even more so because of a short week of prep.

Laviska Shenault Jr. is not the first or last player to see his usage expand across multiple positions, but he may be the torch-bearer for wide receivers that run the ball and have no role in special teams.

A few points from the table. The overwhelming observation is players with kickoff/punt return history have been asked to do more out of the backfield. Curtis Samuel saw his rushing attempts spike in 2019. The Panthers made an effort to use his vision in a concentrated role for the offense.

Robert Woods was not a factor as a ball carrier until Sean McVay asked him to be.

Deebo Samuel and Laviska Shenault Jr. are being asked to unlock their team offenses in utility roles. This is a concept that has not been seen without a history of special teams reps in recent history.

The Jaguars’ next four opponents are the previously mentioned Dolphins, Bengals, Texans, and Lions. Those teams rank 29th, 30th, 31st, and 32nd in rushing yards allowed, which spells plenty of success and opportunity for Laviska Shenault Jr. and lead running back James Robinson.

With Shenault Jr. essentially operating as the Jags’ number two running back as well as being second on the team in targets, his value cannot be understated.

His talent and schedule along with the coaching staff using creative schemes could see him become a dark-horse rookie of the year candidate and a league winner in fantasy. Add and stash him at all costs.