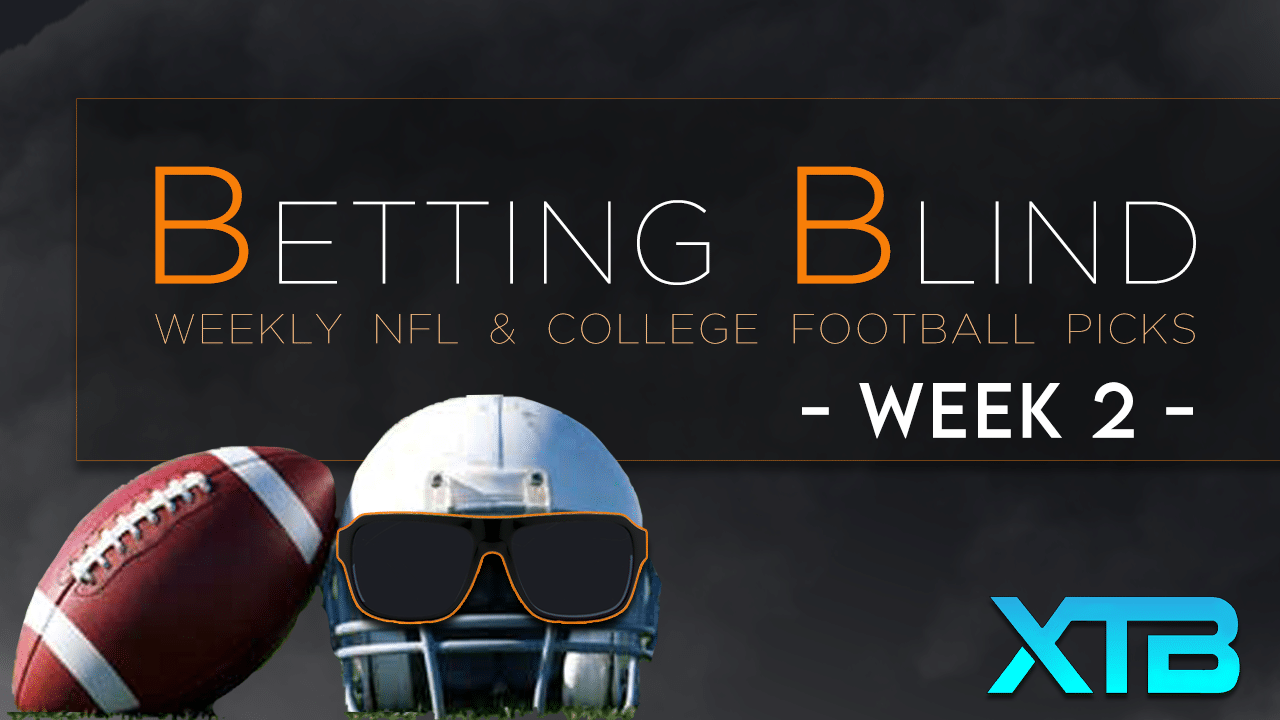 Each week of the 2020 NFL season, Dominick Petrillo (@EnvisionFF) will provide his three best plays of the week. These may be a line, a point spread, or any of a variety of other options. The only thing guaranteed is they will not be parlays. Stay tuned for the Betting Blind picks each and every Friday of the NFL season.

All lines are current as of the time of writing this article. Make sure to check your book at time of placing wagers for any movement.

All lines from DraftKings Sportsbook.

I may be betting blind, but the San Francisco 49ers are better than they showed last week. In a tough situation with the wildfires and injuries mounting, the 49ers did not fair well against an improved Arizona Cardinals team. This week they will get a breath of fresh air in more ways than one. San Fran heads east to New Jersey, away from the wildfires and into a juicy match-up against the New York Jets.
Even if George Kittle does not play, the 49ers have one of, if not the best offensive line in the NFL. Without Jamal Adams, the Jets rush defense is as bad as their offense. This means a team like San Francisco who loves to run will due so with impunity. Not only will Raheem Mostert get his but Jerick McKinnon and Tevin Coleman will get a piece of the offensive pie.
On the Jets side of the ball, Jamison Crowder is truly questionable for this game. A Crowder-less Jets would have the offensive burden fall to Chris Herndon and Breshad Perriman. Le’Veon Bell is already out and will be for a few weeks. Frank Gore is immortal but it does not mean he is good anymore.
Kalen Ballage failed his physical that would have landed him with the Jets via trade prior to the regular season. After the injury to Bell, Adam Gase signed Ballage anyway. This shows the terrible straits the team is in. I do not expect this to remain close.

He did a great job. He’s a guy that came in Day 1 and was asked to do a lot, and he never skipped a beat.

San Francisco is already one game out in their division, the best division in football. They cannot afford another loss this early in the season if they want any chance to win the NFC West. The 49ers were embarrassed last week. They will not be again this week.
Take San Francisco -7

Josh Allen had his first 300-yard game last week. He threw for two TDs and also ran for one as well. This belies the fact he also had two fumbles while trying to run. The Dolphins have become much better on the defensive side this offseason. The addition of Byron Jones to pair with Xavien Howard provides them with a cornerback duo which can limit most receiving tandems.
Their offense is not great but there really is something to the Fitz magic. Last week it was on full display as he cost Miami with an interception in the end zone. This will not deter him from throwing just as much this week.
Tre’Davious White is a great corner. He is perhaps the best in the league, but cannot cover everyone. While he will limit DeVante Parker, this will free up Preston Williams and Mike Gesicki to provide the offense.
There is something to be said for a team traveling to Miami early in the season. Each and every year, a team goes in there and comes out with a loss. The ‘Miami flu’ is real. Usually the Patriots get it. This season it may just be the Buffalo Bills.
Another factor in this game are fans. Whereas most stadiums are still without fans, Florida teams are allowing a limited amount of them to attend games. Whatever fanbase the Dolphins have will be there and it will matter in such a strange season.

Miami may not be up to the Buffalo Bills’ level as of yet. They are an improving team with a good head coach. They will show this week just how close they are to catching up by covering the spread and perhaps even winning the game outright.

I was all over the Packers against the Vikings last week in Minnesota. Their secondary was being led by a pair of rookies and they were without stud pass rusher Danielle Hunter. Neither of these factors have changed in one week. The only difference is they are now on the road. They will be playing a team in Indianapolis who were embarrassed last week against a Jacksonville Jaguars team led by Gardner Minshew.
Philip Rivers did not look good. He is starting to show his age in his 17th NFL season. Marlon Mack was also lost for the season with a devastating Achilles injury. A revelation was found in the duo of Nyheim Hines and Jonathan Taylor though. Hines was on the end of two receiving TD and Taylor’s first touch of his career was a 36-yard reception.
This shows he does have some ability in the pass game despite not being used in such a manner in college. He was actually the leader in receptions and receiving yards for all rookies in Week 1 with 67 yards on six receptions. Coming home, the Colts will be ready to avenge their bad play from last week.
They still have one of the best offensive lines in the NFL. Going against a weakened Minnesota front the Colts can overwhelm them, allowing both Hines and Taylor to get going. By doing so they will limit the struggles of Rivers as he gets comfortable with T.Y. Hilton and Parris Campbell who solidified himself as the WR two in the offense.
The offense of Minnesota struggled for most of the game against Green Bay. Dalvin Cook had two TDs and 50 rush yards. He only had two receptions for minus one yard in the pass game. Adam Thielen managed six receptions for 110 yards and two TDs.
Without Stefon Diggs across from him, this is not likely to continue unless either Justin Jefferson or Olabisi Johnson step up and take control of the opposite side of the field.
Kyle Rudolph is still there, and Irv Smith Jr. was a hype train candidate for many heading into this season. Neither looks to be standing out from the other which could muddle things even more.
With the defense in shambles and the offense yet to hit a stride, the Vikings are teetering on the brink of becoming an also-ran. The Colts, in a weaker division, can make a move forward this week. Expect them to be able to do so in their first home game of the season.
Take the Colts -3.
Dominick Petrillo