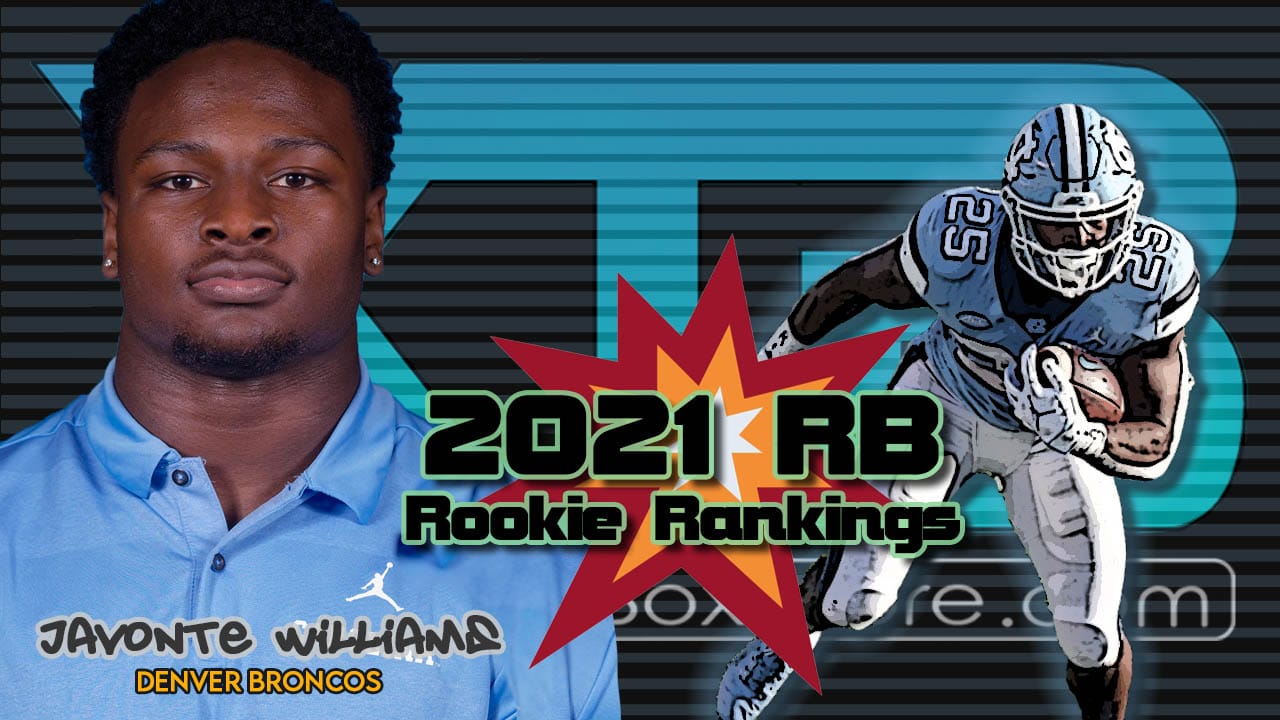 It is still NFL Draft week here at XTB. Just because the heavy lifting was done, doesn’t mean we take a break. Now we have to figure out what all of these landing spots mean, and how to apply it to your Fantasy Football Rookie Drafts. At the bottom of this post there is a list of my Top 12 Running Backs – as of today. This will definitely change between now and the start of the season. But, we need a starting point, and this is it. I’ve added a couple of write ups on some of my favorites. If you have any specific questions, find me on twitter @PeoplezPen. I’ll note, these are just straight rankings without any filters placed on them for PPR, or any scoring specifics. I am in leagues of all types, with the max being 55 man full IDP rosters with 11 starters on offense. I know there are a bunch of these leagues in existence, so some of these guys might be off your radar, but not for everyone.

How accurate was our Draft Guide? Compared against the rankings from other major sites (TDN, PFF, PFN, Walter Football, DraftTek, B/R) XTB was No. 1 by FAR (62.3% correlation)! Get yours now 2021 XTB NFL Draft Guide

Some knocks I see on Najee Harris #NFLDraft

- Doesn't create as much as he takes whats given
- More long speed than short area burst
- Gets a little bounce happy to outside tackle box
- Blocking still seems foreign
- Great one cut, but limited arsenal after that

Absolute perfect fit. It became quite evident leading up to the draft that the Steelers were targeting a RB early, having let James Conner walk, and their shuffling of replacement parts not a viable option. Harris gives them exactly what they need, and is the most they have invested at the position since Rashard Mendenhall was taken 23rd overall in 2008. The NFL has also changed dramatically since then, making this first round capital for Najee even more significant. He was the largest RB in the class at 232 pounds, has handled 200+ carries in back to back seasons for Alabama, and showed a penchant for receiving that may have surprised some. He gets Pittsburgh back to making teams respect the run game, allowing them to utilize all of the receiving weapons they have accumulated. Provided no injuries, this should all but guarantee a minimum of 220 carries, which would put him in the Top 10 conversation for volume, and by far the rookie RB set up for the best immediate return.

Javonte Willams is my RB1 #NFLDraft

This is not for the clicks, not for the gram, not to be contrarian. He is the most complete and pro style running back in this class. Stock up on #25 pic.twitter.com/hBBDrd5XkU

It is no secret that I am a big fan of Javonte Williams. What I am not a fan of is this situation. It has less to do with Melvin Gordon in town, who I admittedly forgot was on the roster, and everything to do with the offense. There are what should be nice pieces in play, but the offensive line has graded out as one of the worst in the league. Yes, Ja’Wuan James should be back at RT, and I do love the addition of Quinn Meinerz in the draft to play either Center or LG. Overall, the running game specifically was not nearly as bad as you would assume, but until the passing attack can balance itself out (and it has everything it needs to succeed), the run game is going to be challenged. Phillip Lindsay, now in Houston, was on a 170 carry and 20 target pace, even with Gordon in town. If Williams can come even close to that volume, he will be in strong play to turn in RB2 numbers in his rookie year. That isn’t even taking into account Gordon will be a free agent after this season.

UPDATE: I hope this wasn’t a jinx, as I’ve often mushed things, but since yesterday we have learned Ju’Wuan James has suffered a torn achilles and is out for the 2021 season. I do think there is enough of an upswing, and as mentioned with Linday’s numbers, the run game had success despite all of the chaos. It’s not enough to change my feeling on Javonte or shift these rankings.

This isn’t a “Tick Above average Balance”. He being bounced around like a pinball, so Trey MUST have GREAT balance. Trey can hold up and escape through traffic despite receiving contact. https://t.co/8o1uF4aNQ3 pic.twitter.com/6St02dGbRw

Trey Sermon is the ‘sleeper’ fave of seemingly everyone this year. It’s hard to argue with the landing spot, and what the Niners have been able to produce from the position. Sermon has a great blend of size and speed, but surprisingly weighed in at just 215. It’s much lighter than I anticipated, and doesn’t back up the bruising type of success I hoped he could have. I also don’t love his vision, from the film I’ve seen, to which I’ve already been lambasted by his personal trainer – and my twitter friend Rishad Whitfield, aka The Footwork King. All in all, the Niners are loading up depth, and prioritizing players that can fit their system. To that end, I believe Sermon does. It also wasn’t the deepest RB class. I’m not putting a ton of emphasis on the draft capital here, but won’t shy from taking him if he falls far enough.

If only Javian Hawkins had a little more size. Can't see him with large workload as he had in college, but he's a steady runner with good vision, balance, and elusion. There will be a role for him on Sundays. Looks like a twig flowing downstream just going with the flow #NFLDraft pic.twitter.com/7ZTuhyzAzk

I can’t quit Javian Hawkins. While it may be true that he is on the lighter side, he isn’t exactly a strong breeze away from being tackled either. A 5’8″/180 frame coupled with blistering 4.46 speed will find a way to get on the field. I saw many people celebrating Mike Davis on draft night, as the Falcons passed on selecting a RB with any of their picks, but they may have struck gold with this UDFA. He reminds me some of Darren Sproles, although I’ve been more consistent in comparing him to Tarik Cohen. Still, I like the fit in Atlanta and I love the player and what he can bring. Explosiveness, toughness, and a better third down outlet than what currently exists on the roster. Don’t examine his college receiving stats as a knock on the profile, because he can catch the rock. And he will earn his spots on the field.

I must admit, I was surprised to see Herbert fall to the sixth round. He has a ton of fans in draft circles, both in real life and fantasy. Yes, he is a bit older. Yes, he has landed behind one of the top ten running backs in fantasy. But none of that should bother you. Herbert is a spark plug with some of the best long speed and balance for any runner in this class. I personally feel he is a perfect understudy for David Montgomery, and can get more carries than even the most favorable projections might indicate. He runs with patience and purpose, and his vision is a highlight waiting to happen. I’m seeing him average around RB12 in early rookie mocks conducted by Ryan McDowell, which sounds about right, but someone you need to target no later than the 36th pick. 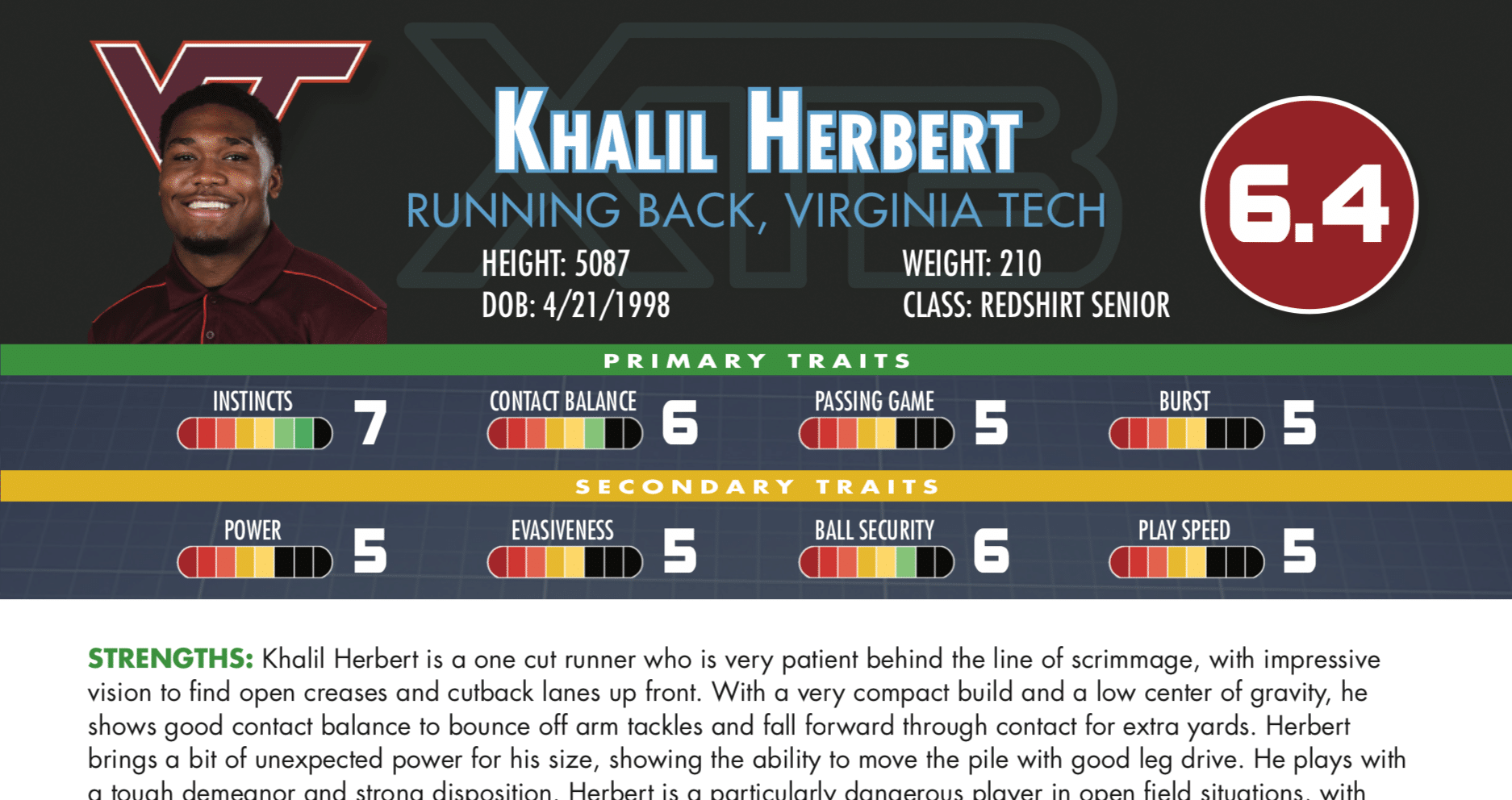 A jack of all trades in the Fantasy Sports industry, covering football, baseball, and the NFL Draft. Has written, edited, podcasted, and produced over 1,000 videos for his various series, in addition to dozens of guest appearances and collaborative pieces. A top ranker on Fantasy Pros for both Football & Baseball, avid fan of mining for MLB prospects, and former D1 College hoops player, Andy is a native New Yorker, who has served as a firefighter in the FDNY for the past 20 years and counting.