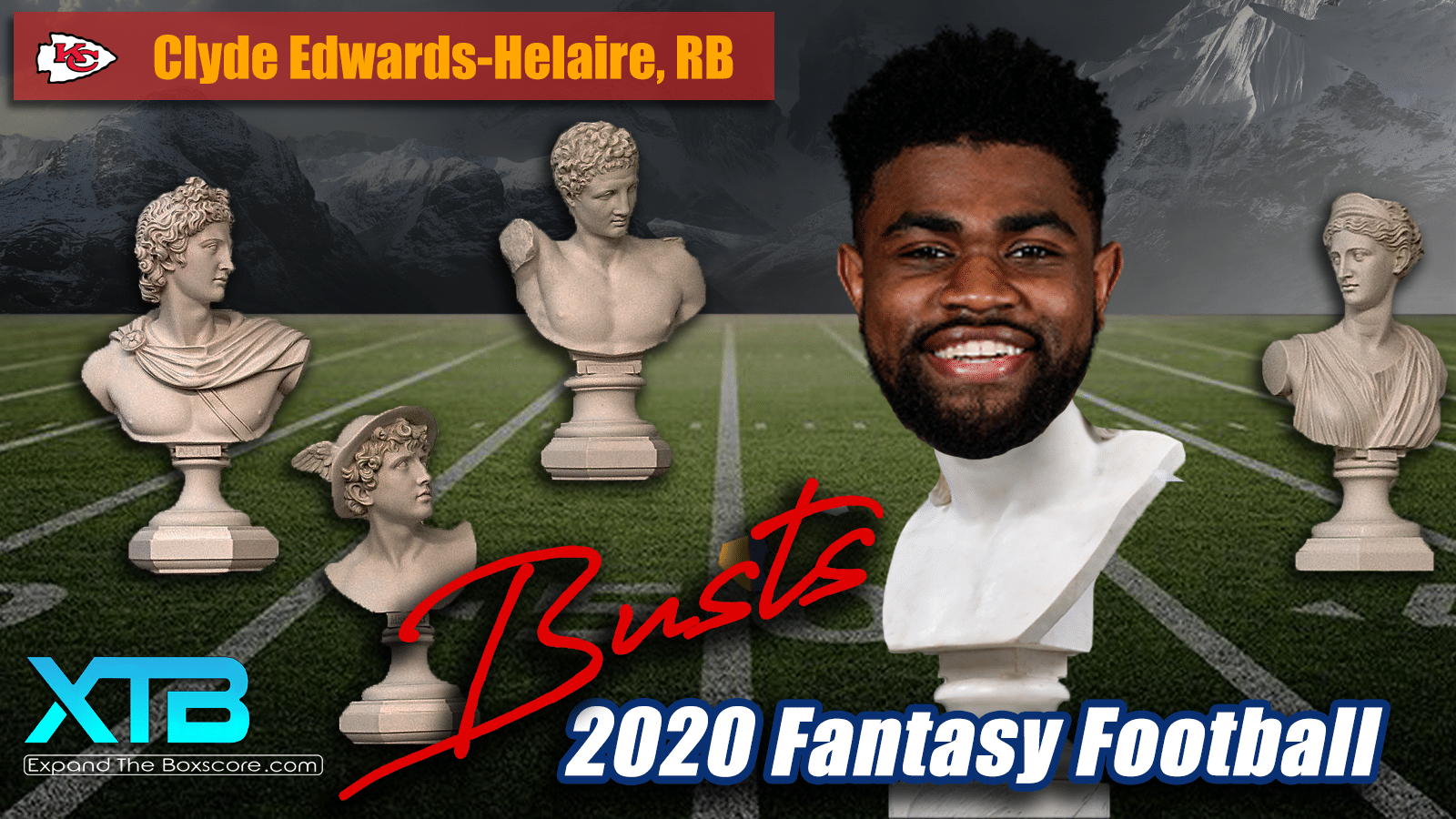 This is the third installment in my 2020 Fantasy Football Bust series, highlighting players who may be good, but definitely not worth their draft position going into this upcoming year.

We’ve gone through A.J. Brown and Melvin Gordon, and now we come to a running back who’s seen a volcanic rise in the past few weeks. That RB is Clyde Edwards-Helaire.

Edwards-Helaire seems to be a player who is poised for an incredible year. He’s joining the previously top ranked offense with the best QB in the NFL led by a head coach who is an offensive genius. So why do I have him listed as one of my top fantasy football busts for 2020? Surprisingly, there’s a lot of reasons.

We’ll start with Clyde’s LSU tenure. While it may be unfair to judge someone on college stats (and a lot of the time these stats can be useless), something with running backs remains pretty consistent; the elite RBs stopped taking a back seat after their freshman year.

This is a universal truth with nearly all RBs currently in the NFL right now. The only exception of an ‘elite’ RB not being his college’s #1 RB after his Freshman year is Alvin Kamara, who played on a team known to run with their QBs and WRs much more often than their actual RB.

Seattle’s Chris Carson and Philidelphia’s Miles Sanders were the only other exceptions to this rule. That’s only three starting RBs out of 32 in the entirety of the NFL.

Clyde Edwards-Helaire didn’t become the starting RB on LSU until this past season; his last year. CEH had every opportunity being granted to in 2018, but was the backup to Nick Brossette. Brossette didn’t get drafted and signed on to the Patriots as an UDFA.

For such a highly touted prospect, it’s pretty damning that a player couldn’t start ahead of someone who wasn’t able to get drafted. CEH did have a great 2019, but it is not a coincidence that he managed an all-time impressive year while the entire LSU offense was putting up all-time impressive numbers.

The second concern for CEH going forward is the false equivalency that the Chiefs’ #1 passing attack will equal RB1 numbers. Despite having the top-rated passing game, the Chiefs sat directly in the middle of the NFL for passes targeting RBs during the 2019 season.

This doesn’t scream of an offense featuring RBs in the passing game.

His outlook as an actual runner in the Chiefs’ offense doesn’t seem to bode well either. The Chiefs ranked 27th out of 32 teams in rushing attempts last year, and 24th in 2018. Despite having solid rushing averages and the lead more times than not, the Chiefs just didn’t like to run the ball.

I don’t expect Andy Reid to change that anytime soon considering he has the best QB in the league, and some of the best receiving threats as well.

Outside of Kareem Hunt’s amazing 2017 season, Andy Reid hasn’t had a top 10 fantasy RB since 2014. And to be frank, he’s been blessed with having HOF-caliber players at the position for years. When dominance at that position has been scarce, Reid has failed to produce a fantasy-relevant RB1.

The third reason why I think CEH will be a 2020 fantasy football bust is the most obvious of them all – his ADP. I like to think it has been driven by ‘The Mahomes Factor’. At the moment, CEH’s ADP is #14. That isn’t the 14th overall RB (which would be more understandable). That’s 14, overall.

This is ahead of proven fantasy workhorses such as Austin Ekeler, Aaron Jones, Joe Mixon, Nick Chubb, and others. It is actually baffling that a rookie RB is getting this amount of hype ahead of players in proven systems, with sustained success.

While I think CEH is one of the biggest busts for the 2020 season, this doesn’t translate into him being a bust in dynasty leagues or in leagues going forward; I think he has the potential for much more success.

Owners should be wary of him being a ‘workhorse’ due to his nature as a scat-back in his 1st season. At the 14th overall pick I would stay away from him altogether because you’ll never get your return at that price range. He would need a historically great rookie campaign to do so, and despite landing in what many determine as a ‘PPR heaven’, I’m not nearly as convinced.