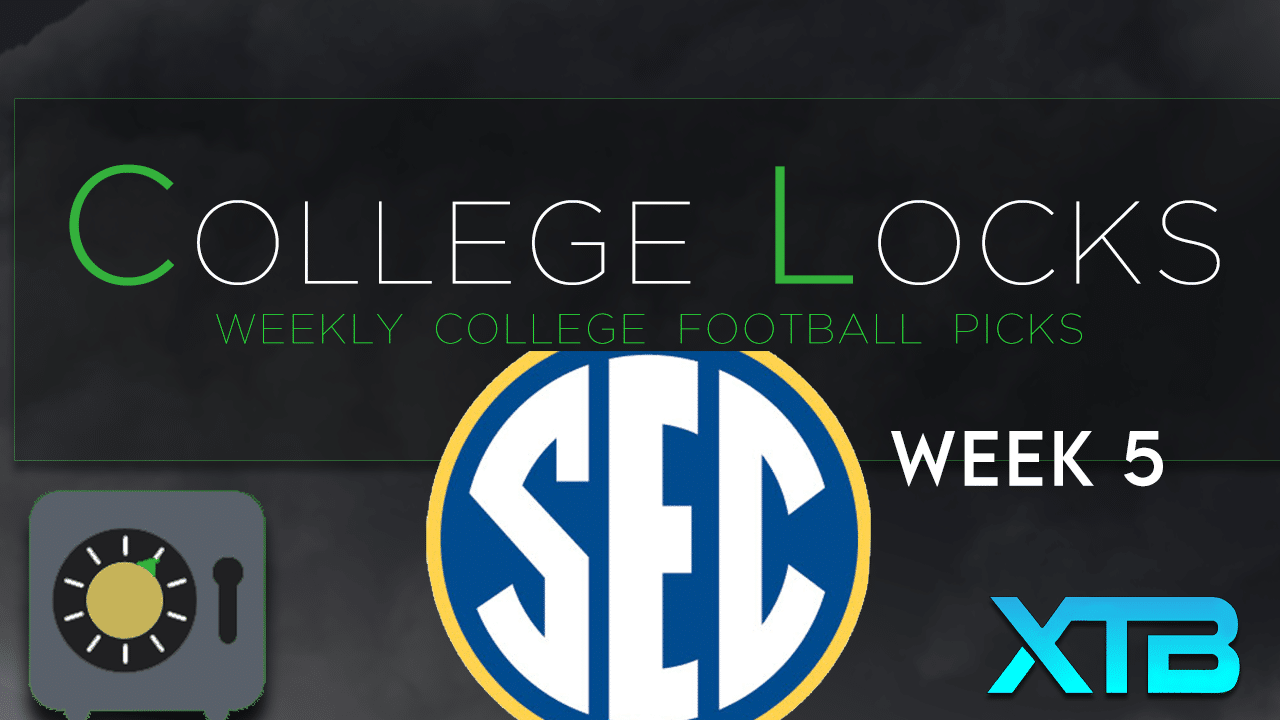 Posted at 12:46h in Betting by Jeremy Morris
7 Likes
Share

With four teams on a bye and two more sidelined by Covid-19, there are only four games on the SEC Week 5 slate. On the surface, the limited options made picking games this week a little tougher than weeks past.

Add in that only one team playing Week 5 (Alabama) has been consistent enough to compile a winning record and among the other seven, there are four .500 and three are one-win records. If that is not enough, two (Tennessee and LSU) have glaring question marks at quarterback and coaches who have been vague/non-committal about who will even be playing.

Trying to make picks this week felt like trying to choose which mid-2000’s Adam Sandler movies to watch — Pixels, Jack & Jill, Grown Ups, Grown Ups 2, etc. — there’s really no such thing as a good option, just becomes a matter of which one is the least bad.

Between limited preseason camps, conference-only schedules, and any/all Covid-related complications, capping the 2020 season has been more of a challenge than any season before it, but I have a 7-1 record so I guess it’s not too bad. I put double the time and research into these Week 5 SEC picks. Hopefully, it pays off and we can keep it rolling

At 2-2 and 1-3, with both teams coming off disappointing losses, both looking defective on one side of the ball, and both facing treacherous back stretches of their SEC-only schedules, it feels like both Auburn and Ole Miss’s seasons are hanging in the balance.

As bad as the defense has been, the offense has been such a juggernaut that they have been in every game for all four quarters. Led by the SEC’s second-leading passer Matt Corrall (69% for 1,280 yards, 11 touchdowns) and fourth-leading rusher Jerrion Ealy (68 carries, 355 yards, 7 touchdowns), the Ole Miss offense is averaging 540.3 yards and 37.8 points per game.

If this level of offensive production continues, they will break the school record for total offense and finish with the second-highest scoring average in Ole Miss history (behind Hugh Freeze’s 2015 that averaged 40.8 points per game).

The one concern — after only committing one turnover in three games to start the season, Ole Miss had seven last week including six Matt Corrall interceptions. Ball security has obviously been a point of emphasis for Lane Kiffin and his staff in practice this week and the way Corrall responds should have a lot to do with the outcome on Saturday.

Auburn is not re-writing record books but like Ole Miss, the huge disparity between offense and defense has essentially been their downfall — only in reverse. Even with the departure of five defensive starters who were drafted in April, Auburn has the SEC’s third-ranked scoring defense and fourth-ranked pass defense in 2020.

I would not call Kevin Steele’s defense elite, but it has been good enough to keep them in every game on the schedule. Auburn’s offense has not helped their defense, the opposite in fact. The offense’s inability to sustain longer drives has kept them on the field for 54% of games.

All of Auburn’s problems are all on the offensive side of the ball, most of them directly behind the ball, waiting to take the snap, to be more specific. Last season, Bo Nix became the first Auburn quarterback since 1946 to start Week 1 as a true freshman. He was not spectacular (57%, 2,542 yards, 16 touchdowns, six interceptions) but he had his moments, showed promise, and was expected to improve in 2020.

Instead, Nix has regressed. His 54.7% completion percentage is last among SEC starters and Auburn is bottom five in the conference in every passing category. He has plenty of talent at skill positions — one of the best receivers in college football in Seth Williams, maybe the fastest player in the SEC in Anthony Schwartz, and arguably the best freshman running back in the country in Tank Bigsby.

To be fair to Nix, some of the offensive struggles probably fall on Gus Malzahn and first-year offensive coordinator Chad Morris, but whoever is to blame, Auburn better figure things out fast or Nix will probably have a new coach and coordinator in 2021.

An anemic offense against a defense that cannot stop a nosebleed, and an explosive offense against a solid defense; if there is a game on the schedule that Bo Nix can use to get back on track, it is this one. Aside from Nix, in Auburn’s two losses, Tank Bigsby had only 24 carries combined, in spite of the fact that he is averaging 6.1 yards per rush.

Bigsby is special — the total package of speed, power, vision, and elusiveness to be the next great running back in the Bo Jackson, Cadillac Williams, Stephen Davis lineage. Also, his name is Tank. If Malzahn and Morris are competent, they will feed him the ball, control the clock, and keep Ole Miss’s offense off the field. I may regret this, but I am betting on competence, taking Auburn and the under.

After an 0-2 start, Kentucky has bounced back in a big way the past two weeks with back-to-back wins over Mississippi State and Tennessee by a combined score of 58-9. As high-flying, pass-heavy spread offenses are dominating college football, Mark Stoops has built Kentucky into a 90’s SEC throwback.

The Wildcats are the number one rushing team in the SEC, averaging 206 yards per game and keeping the ball on the ground on 64.13% (1st in SEC, 4th in Power 5) of their offensive plays. Running back Chris Rodriguez Jr. (46 carries, 257 yards) and quarterback Terry Wilson (56 carries, 253 yards) both rank top 10 in the conference in rushing yards.

Kentucky ranks dead last in the conference in passing attempts and yards but when they have thrown the ball, Wilson is completing 64.4% of his passes (6th in SEC) and has only one interception which is tied for least in the SEC with two players who have played one less game.

Defensively, Kentucky is allowing only 19.5 points per game (2nd in SEC) and rank top three in the conference in run defense, pass defense, and turnovers forced. In their last two games, the Wildcats defense has forced 10 turnovers, led by linebacker Jamin Davis and defensive back Kelvin Joseph; each with a pair of interceptions and a pick-six.

Missouri also started slowly, going 0-2 before rebounding with a huge upset over LSU to give Eli Drinkwitz his first win in the SEC. Through three games, the Tigers rank second to last in the conference in scoring defense (38 points/game), 10th in pass defense (307.7 yards/game), 9th in total defense (483 yards/game), and last in turnovers (0.3/game).

As dreadful as those numbers sound, I do not think Missouri’s defense is nearly as bad as it appears on paper. I am not saying they are great, but in their first three games with a new coaching staff and defensive scheme, they played two of the SEC’s top three offenses. Especially for this game, it is worth noting that they have been solid against the run, limiting opponents to 130 yards per game.

On offense, freshman quarterback Connor Bazelak has been nothing short of phenomenal, completing 71% of his passes for 692 yards, four touchdowns, and only one interception in two starts. Bazelak has a lighting-quick release, uncommon poise under pressure, can throw on the run, and is extremely accurate on deep and intermediate throws both between the hashes and to the outside.

Junior receiver Jalen Knox (14 receptions, 156 yards) has been his favorite target but he has spread the ball all over, completing passes to 15 different receivers.

Kentucky has faced two of the most erratic and mistake-prone quarterbacks in the SEC (Jarret Guarantano & KJ Costello) the past two weeks. Even as a freshman, Bazelak is in a different stratosphere and I think he gives their defense everything they can handle.

Missouri’s strengths on both sides of the ball match up well with Kentucky. With two weeks to prepare for this game and Kentucky’s potential for a letdown coming off a big win, I am taking Eli Drinkwitz and the Tigers to cover.

With Myles Brennan likely out this week, LSU will turn to one of two true freshmen — TJ Finley or Max Johnson. Finley is a 6-foot-6, 242-pound pro-style quarterback who came to Baton Rouge as a three-star prospect out of Ponchatoula, LA. Johnson is a 6-foot-5 dual-threat former four-star and the son of Super Bowl-winning quarterback Brad Johnson.

Both have talent, but neither has taken a snap in a college football game. Ed Orgeron has yet to name a starter — I am betting on Max Johnson — but either way, expect to see a simpler, more conservative, run-focused offensive gameplan rather than the 44 pass attempts and 370 yards LSU has averaged with Myles Brennan under center.

One potential problem with playing a conservative, run-first game — the LSU defense has been swiss cheese since Bo Pelini showed up to take over for Dave Aranda. If they continue to allow 380 passing yards and 32 points per game, they may not have the option to rely on their ground game and ease true freshmen into the SEC

South Carolina has not been a prolific passing team like the teams LSU has struggled against. Senior grad transfer Colin Hill has the arm and accuracy to air it out and go toe-to-toe in a shootout, but in the Gamecocks’ two wins the last two weeks, the offense has revolved around running back Kevin Harris (81 carries, 409 yards, 6 touchdowns), with Hill taking shots downfield at opportune times and keeping the passing game at an efficient 24-25 attempts.

When they have thrown the ball, it has been to Shi Smith (34 receptions, 21 more than anyone else on the team) more often than not. Expect LSU sophomore corner Derek Stingley to follow Smith wherever he lines up all game and for that matchup to be a crucial one in determining the outcome of this game.

Along with the ground game on offense, South Carolina’s defense has elevated their play dramatically in the last two weeks, particularly in the secondary. Cornerback Jaycee Horn blanketed Auburn’s Seth Williams and pulled in two interceptions last week and freshman defensive back Shilo Sanders was a human wrecking ball, covering the field from sideline to sideline and finishing with 10 tackles.

Max Johnson won’t be the only son of an NFL great in this game — Jaycee Horn’s father is Joe Horn, multi-year Pro Bowl receiver with the Saints, and Shilo Sanders’ dad is a guy named Deion.

I think South Carolina’s offense will be able to do whatever they want against LSU’s defense, and unless one of these LSU freshman quarterbacks is Peyton Manning, Sam Bradford, Shane Falco, etc., LSU’s passing game will struggle against the Gamecock defense.