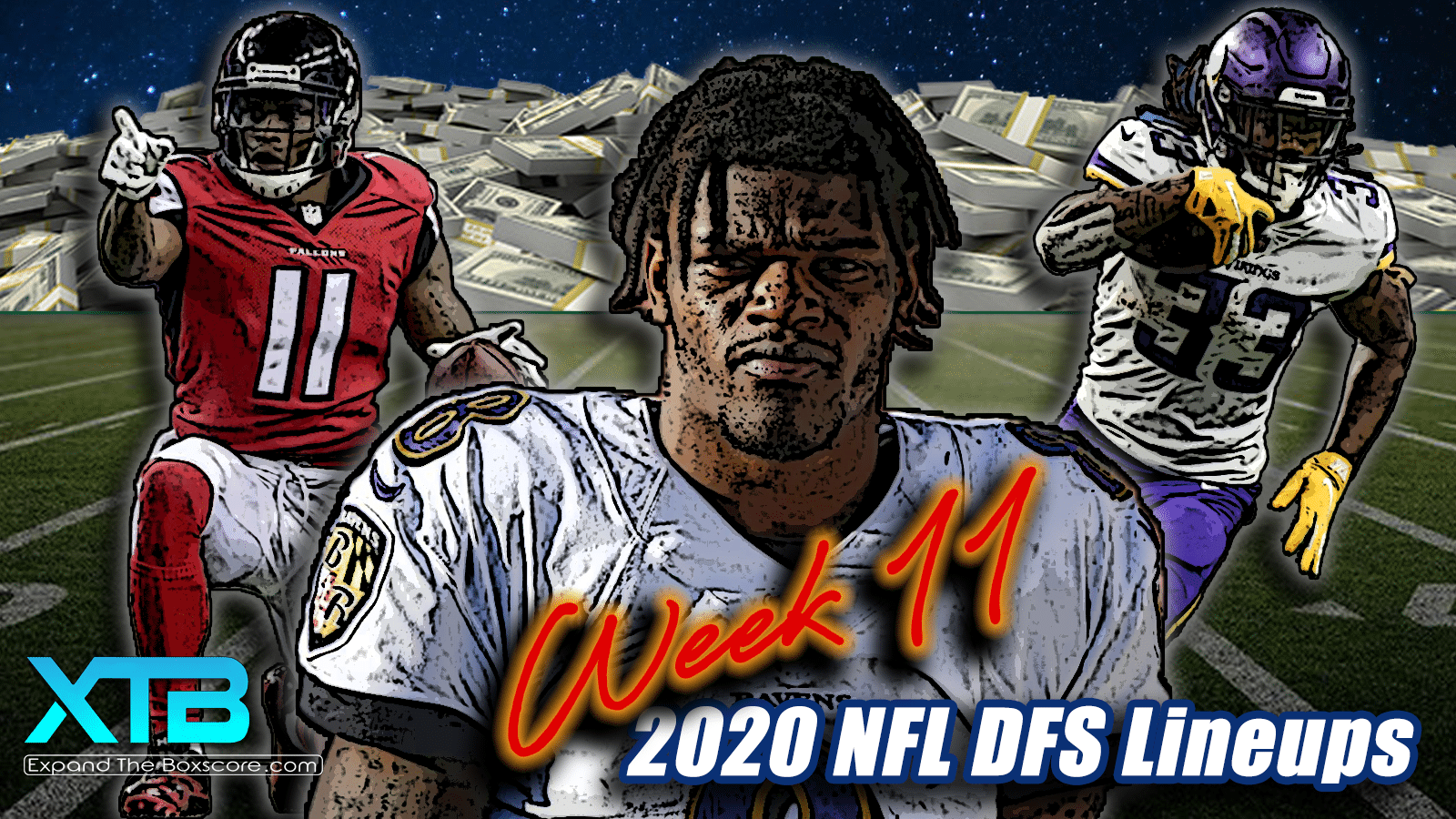 Posted at 08:00h in DFS by Rolando Gonzalez
0 Likes
Share

Week 11 is here and with it come another great slate of NFL games and daily fantasy matchups. This week is going to be a bounce back affair for several big time fantasy players.

Lamar Jackson is my top daily play at quarterback for this week. Lamar and the Ravens struggled to get things going in the monsoon against New England last week, but this week they are due for a big bounce back game. The struggling Tennessee Titans defense is coming to town, so Jackson should have no problem putting up a big numbers in this one. Lamar has taken a step back from last years MVP season but he has QB1 fantasy potential each and every week.

The Ravens rushing attack is still the best in the league and they need their high-flying quarterback to lead them with both his legs and his arm in order to be successful. Baltimore needs Lamar to be at his best from here on out to get them where they want to be, and I think he will flip that switch this week and put on a show against the Titans.

The Tennessee defense has been giving almost 30 points per game so far and I do not see them stopping anyone anytime soon. I love Baltimore in this one to not only win, but win big. This matchup is my play of the week and do not be surprised if you see another familiar face later on.

The MVP returns this week so you better be sure to get him in your daily fantasy lineups.

Dalvin Cook may cost a pretty penny this week, but it will definitely worth it as the Vikings have a home matchup against the Dallas Cowboys. The Chicago Bears defense kept Dalvin Cook in check last week, but this week going up against Dallas’ porous rush defense, he should have no problem running free all game long.

Dallas is at the bottom of the league in stopping the run and Vikings offensive coordinator Gary Kubiak will definitely find ways for Cook to go off for a big time game. Cook has been fantasy gold so far this year and I expect it to continue with a big bounce back performance. Watching Dallas get tore apart on defense is something I am used to and I just have not seen any reason why they would start to play better now.

Dallas is beat up on defense with several injuries, and you just do not see the fire on the defensive side of the ball. Cook is primed to get Minnesota going again with their high-powered running game. Another 30-plus fantasy point game is coming for Cook, with 150 yards from scrimmage and a couple of touchdowns.

Cook will be money for all daily fantasy players this week and will be a big reason I am winning on Sunday.

This week my top play at wide receiver will be Julio Jones of the Atlanta Falcons. Jones is a household name in the daily fantasy world, and no one can deny the future hall-of-famer still has some juice left. Coming off a bye week, Julio and the Falcons will get to go up against the New Orleans Saints.

A few weeks ago Julio chimed in on the debate of “Who is the best receiver in the league?” No surprise Julio said himself, just like Davante Adams and DeAndre Hopkins said about themselves, respectively. This week he gets to prove it. Atlanta needs to get their offense going to get back in the NFC Wild Card race, and the only way to do so is to put some points on the board.

I expect Jones to go for 10 receptions for over 150 yards and two touchdowns against the Saints. I have Julio investments all over the place and I cannot wait to see him cash in and bring me some W’s on Sunday.

Mark Andrews is my guy this week as the Ravens take on the Tennessee Titans. As you may have read earlier, I am all in on Baltimore in daily fantasy this Sunday. The Tennessee Titans have failed to stop opposing offenses, giving up nearly 30 points per game over the last month. I expect Baltimore Ravens quarterback Lamar Jackson to exploit every hole in the Titans secondary and get the ball to his number one target Mark Andrews.

Andrews should also expect an even larger role this week and beyond with their other tight end Nick Boyle out for the season. Andrews needs to get more looks in the passing game going forward. He is a physical specimen who is a walking mismatch against safeties and linebackers. His volume the last four games has only been about six targets per game, and that simply is unacceptable for Baltimore’s best receiving threat.

I expect Mark Andrews to have a big game and go off for eight catches and 80 yards, and not one but two touchdowns.