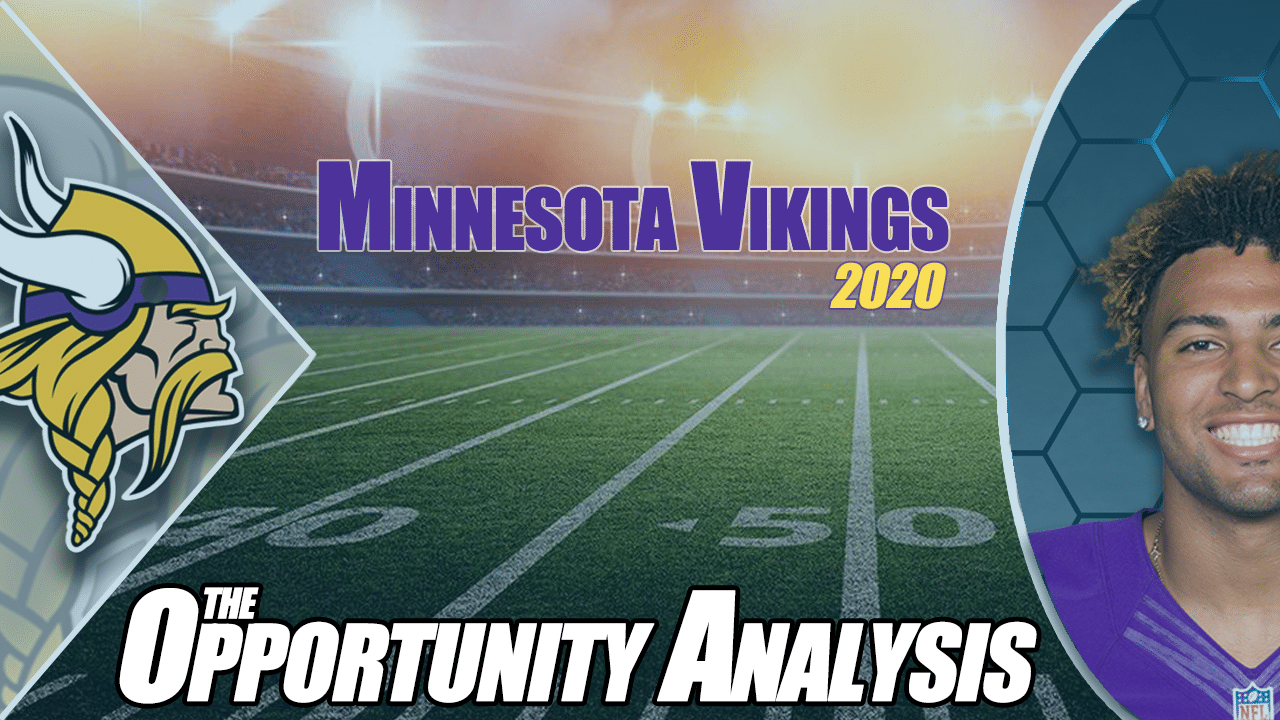 If you haven’t read the article on the opportunity analysis, I recommend going back and doing so before reading the team breakdowns.

The loss of Stefon Diggs is a major component to why the Vikings are number one on the opportunities analysis vacating 90+ targets, but the biggest reason is the potential increase in drop-backs. New Offensive Coordinator Gary Kubiak has overseen plenty of offenses dating back to his days with Houston, and it’s clear that the 502 drop-backs in 2019 will be an outlier. Before becoming a senior advisor in Minnesota, Kubiak most recently ran offenses in Denver and Houston.

In the prior three seasons his teams saw drop-backs of 684, 630 and 657 respectively. All three of those seasons were well above the 502 in 2019. For the analysis we factored in Kubiak’s historical drop-backs along with Vikings drop-backs from 2019. When we combined the four seasons together, the projected increase comes out to 116. This potential growth in drop-backs along with the Vikings having 110 available targets jumps their projected opportunities to 226 the top spot for 2020.

Coming off a down injury-plagued year where he only saw over 5 targets per game, Adam Thielen has a lot on his side to help him return to the 9 targets per game he saw in 2018. In the nine games where Thielen played his full allotment of snaps, his 16 game pace was 184 fantasy points which would have made him a borderline top 20 wide receiver. These numbers came with the Vikings having the lowest drop-backs in the league at 502, and with a spike in drop-backs coming, wide receiver 20 is clearly his floor.

Along with the potential increase in team drop-backs, rookie Justin Jefferson looks to be the most likely wide receiver to replace Stefon Diggs opposite of him. Already dealing with the transition to the NFL, Jefferson will most likely have a shortened offseason which means Kirk Cousins should lean on his veteran. Overall, Thielen’s average draft position is at pick 42 according to Bestball10 ADP which means he can be drafted in the mid fourth round as a wide receiver two. At that price Thielen offers immense upside as he clearly has a path to wide receiver one value in 2020.

A second name to monitor is tight end Irv Smith, Jr who steadily became more involved in this offense over the second half of his rookie season seeing his routes nearly double per game. More promising is that increase in usage resulted in him outpacing starter Kyle Rudolph over that span. Even if Rudolph stays involved, the Vikings ran the second most pass plays in the NFL with two tight ends on the field. Also, another key element to Smith’s game is his slot utilization. In 2019, Smith led the Vikings in slot routes during the regular season, and heading into his second year we can expect those kinds of opportunities to grow.

It is typical to see tight ends make a leap in their second year as Mark Andrews, Dallas Goedert and Mike Gesicki all were fantasy relevant in their second seasons in 2019. Just as important, Kubiak has a track record of getting the most out of his tight ends as Owen Daniels became a top ten asset in tight end points per game under him from 2007-2009. Smith is currently going undrafted so if reports come out that it looks like he has taken the next step, he is a low risk flyer that could pay off in the later rounds.