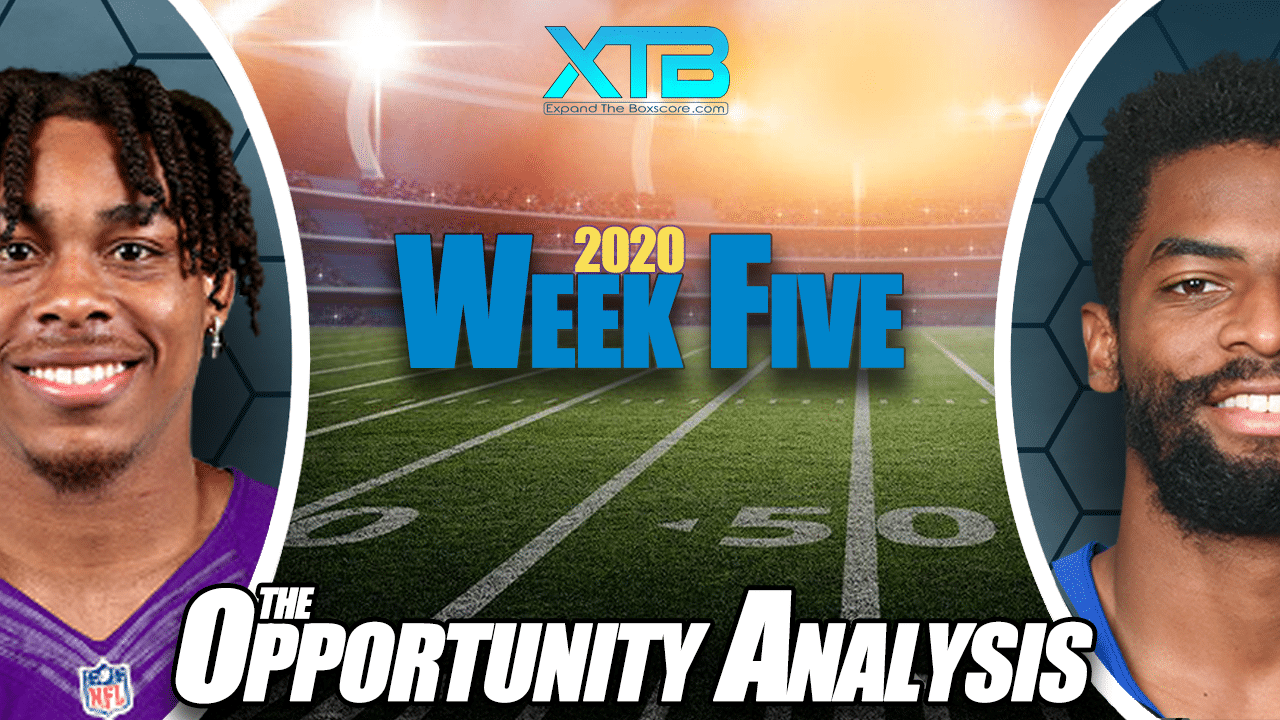 In the Week 2 Opportunity Analysis we discussed in detail how we are using historical dropback data to identify outliers early on in 2020.

Currently the Cowboys average over 55 dropbacks a game, which is five more then the number two team in the league and nearly 17 more than the NFL average. This will not continue and we should see a dip as early as this week against the New York Giants. The Cowboys are a nine point favorite at home so game flow alone will impact these numbers.

The Giants as a team have only faced 35.3 dropbacks per game on defense, pointing to a major dip in Week 5.

Dalton Schultz has been riding the coattails of this massive pass volume as his 24 targets since Week 2 are third among tight ends. This usage has seen his roster percentage sky-rocket in fantasy over the past few weeks, and now looks to be on the TE1 radar.

However, this week he will face a Giants defense that has allowed the eighth fewest points to the tight end position while seeing the seventh fewest dropbacks per game. If we apply Schultz’s 13% target rate on dropbacks to the projected dropbacks his eight targets a game would drop to five.

Schultz is a solid rest of season start, but this week I would prefer to pivot to players like Eric Ebron versus Philadelphia or Jonnu Smith versus Buffalo.

The biggest beneficiary of all this pass volume has been Amari Cooper, as his 12.8 targets per game leads the NFL. This week he will face a Giants defense that has only allowed one player to reach double digit targets in a game this season. This should not come as a surprise as the Giants have not been able to keep up offensively while their defense has played a lot more football over the first four weeks.

On top of the decrease in volume, Amari Cooper will square off against Giants shadow corner James Bradberry, who has held players like Diontae Johnson (6-57) and Allen Robinson (3-33) to modest days. Cooper is not a sit in season long, but he should be avoided in DFS.

Last week the 49ers played a very competitive football game against Philadelphia, which led to a season high 51 dropbacks. Prior to Week 4, the 49ers did not crack the 40 dropback mark on the season. This week they face a Miami team at home that averages 36.3 dropbacks per game on defense.

The 49ers are nine point favorites at home and are set to return top running back Raheem Mostert, who should allow them to establish the ground game this week. Even with Jimmy Garoppolo set to return as well, I expect the 49ers to not have to throw much in this one to win.

Brandon Aiyuk was electric last week taking a short pass for a 38-yard touchdown. There is a lot of buzz around the rookie as we have seen his roster percentage rise up over 65%. This week’s matchup looks great against Miami, but the Dolphins are set to return stud CB Byron Jones, which should help solidify that secondary especially against wide receivers.

Aiyuk only saw six opportunities last week in a game where the 49ers dropped back to throw 51 times, which means he is best left on benches this week.

Jerick McKinnon has done a fine job filling in for injured backs Raheem Mostert and Tevin Coleman, finishing Week 4 with 21 touches. Now with Mostert set to return it looks like McKinnon will lose a majority of his carries heading into Week 5. Also, last week McKinnon benefitted greatly from the high pass volume as he was second on the team with eight targets on the day.

Those targets are sure to come down as the 49ers should be able to control this game, and with Mostert getting most of the carries McKinnon should be off the fantasy radar in Week 5.

The Vikings pass offense has started to click with the emergence of rookie wide receiver Justin Jefferson. However, from a pure volume perspective we have not seen the Vikings need to throw much yet in 2020. That should change in Week 5 as the Vikings will be traveling to Seattle to face a Seahawks.

The Seahawks offense has been clicking on all cylinders, which has forced opposing teams to throw a lot against them. This season no team has seen more dropbacks per game on defense than Seattle. Along with the huge volume, teams have seen a lot of production against the a banged up Seattle secondary as they are allowing the most points to wide receivers so far this season.

Both Adam Thielen and Jefferson are starts in season-long and DFS in Week 5. We have seen numerous duos of receivers including Dallas (Michael Gallup and Amari Cooper) and Atlanta (Julio Jones, Calvin Ridley, and Russell Gage) get double digit fantasy points versus Seattle so far in 2020.

Thielen and Jefferson are seeing a target on over 20% of their routes and with the volume sure to rise both should be in for nice days in Week 5.

This season the Giants have been a bit more pass-heavy as they have dropped back on average 43 times per game. This is mostly due to game flow as the Giants have struggled to put up points consistently so far this season. This coupled with the fact they have faced two stronger defenses in the 49ers and Rams have left a lot to be desired from a fantasy perspective.

The reason why I am buying the Giants this week is they are big road underdogs against a very poor Dallas defense.

Darius Slayton is going from facing two of the tougher matchups for outside wide receivers in San Francisco and the Los Angeles Rams to one of the best in Dallas.

Slayton himself has paced the team in routes since Shepard has been out and continues to see roughly seven targets a game. This should be more than enough to get loose for a big game as the Cowboys will still be down multiple starters in the secondary.

Evan Engram has been average for fantasy, but you cannot ignore his 29 targets on the season. This week he gets a Dallas defense that has allowed the 7th most points to the position. With the Cowboys expected to put up points at home both Evan Engram and Darius Slayton are solid season-long and DFS plays as the Giants try to keep up in Week 5.

Similar to the Giants, the Bengals have been outpacing their projected 2020 dropbacks this season as the Bengals have averaged over 50 dropbacks per game. Last week this came crashing down as they fell below 40 in a game for the first time this season. The key here is these low drop backs came in a win versus Jacksonville.

This week the Bengals are huge underdogs on the road as they travel to Baltimore to face the Ravens. The Ravens look to be a tough matchup for the Bengals, but game flow will be the key for the pass catchers in this one.

So far in 2020 the Ravens have been average against wide receivers, but more importantly they have faced the second most drop-backs per game on defense. This should allow both Tee Higgins and Tyler Boyd to be useful for Fantasy

Tee Higgins has emerged as the clear WR2 in this offense, as he has ran more routes than A.J. Green over the past two week and out-targeted him 16-10. We have seen outside receivers have solid fantasy days versus Baltimore. This is strictly a game flow play as the volume should help Higgins be fantasy-relevant.

Higgins is in play in DFS as well because his price tag on DraftKings is outside the top 30 of receivers. Most people will be off Higgins becauser his matchup looks tough, so he should be a great contrarian play this week.

With A.J. Green fading over the past two weeks Boyd has emerged as the clear number one in Cincy, averaging 10 targets per game. This target volume will keep Boyd fantasy viable in tougher matchups, including this week against Baltimore. The Ravens have allowed some production from the slot as Terry McLaurin, Randall Cobb, Brandin Cooks, and Jarvis Landry found some success on the inside.

This take is probably more for season long players as on DFS sites Boyd’s upside does not justify his lofty price tag, especially on DraftKings. You will learn from the Opportunity Analysis that game flow matters and in this one it will for the Bengals.

Other Opportunity Analysis Buys for Week 5