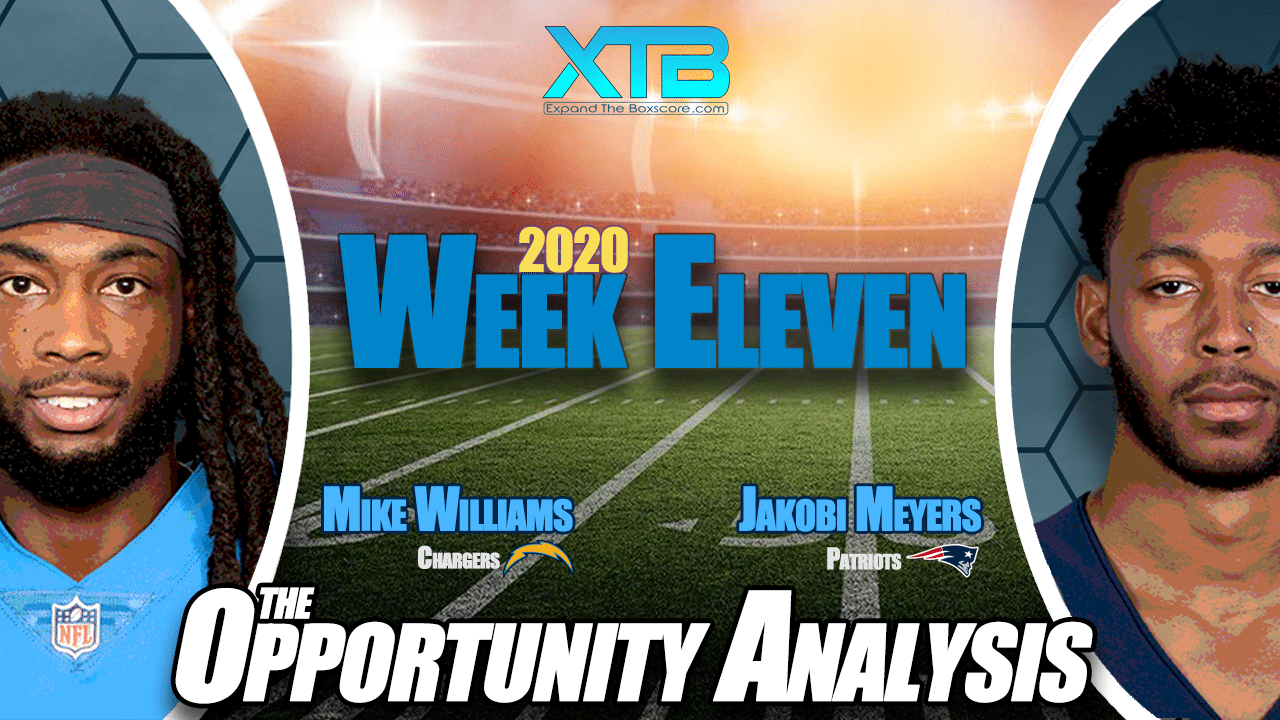 Last week the Chargers looked out of sync on offense as Justin Herbert had a tough time sustaining drives, only completing 20-32 for 187 yards and 2 TDs. The 187 yards marked the first time in 2020 that Herbert didn’t get over 250 yards in a game. This directly impacted every pass catcher, as no skill position player had over 40 yards receiving on the day. This week the Chargers face a Jets secondary that allows the 6th most points to WRs and 3rd most points to tight ends over the past 5 weeks.

Of course we are all starting Keenan Allen, but what about his running mate Mike Williams. Williams has been a bit up and down in his 7 full games this season, with 4 games of 69 or more yards and 3 games of 38 or less. This should be an up game for Williams as the Jets have struggled versus bigger outside WRs, including DeAndre Hopkins (6-131-1), Tim Patrick (6-113-1), and Jakobi Meyers (12-169). This makes Mike Williams a buy for week 11.

Coming off a monster performance versus the Jets, the Patriots passing game came crashing back down, with Cam Newton not having to do much through the air to pull off an up upset win. The final line of 13-17 for 118 yards and 1 score is the direct reason why no pass catcher had over 60 yards receiving in the game. However, when you pull back the curtain, we now see that Jakobi Meyers receiving game of 5-59 is so much more impressive then the line actually shows.

Over the past three weeks, since the Julian Edelman injury, Meyers has accounted for over 40% of Newton’s completions and over 50% of his yardage. This has led to an absurd 40% target share. The craziest part of all this is Meyers has yet to turn any of this production into a TD, so to say the man is due is an understatement. Now, on the road, in a dome, versus a Houston team that allowed opposing teams WR1s to flourish, including Davante Adams (13-196-2), A.J. Brown (5-56-2), and Adam Thielen (8-114-), Meyers is firmly on the WR 2/3 map in week 11.

The Kansas City Chiefs versus the Las Vegas Raiders should be a fun one as the Chiefs look to avenge their only loss of 2020. In that game the Raiders took a double digit lead and was able to use the run game to dominate in the 4th quarter. However, before that, Derek Carr did whatever he wanted through the air going for a season high 347 yards and 3 scores. This included multiple explosive plays too, with two 50-yard TD passes to Henry Ruggs and Nelson Agholor. Now with the Chiefs offense looking to get revenge this could lead to a shootout in Las Vegas.

Last time these two teams faced off Ruggs was returning from an injury that forced him to miss the two weeks prior. This led to Ruggs only running a route on 20 of 31 (65%) Derek Carr drop-backs. Now healthy, Ruggs last week paced the team in routes, running a route on 23 of 27 (85%) Carr drop-backs. This uptick in usage should lead to a lot more opportunities for Ruggs making him a solid WR 3 this week.

The Steelers have gone to a pass heavy attack the last two weeks with back-to-back 46 drop-back performances. In week 9, Pittsburgh fell behind quickly versus an under-manned Cowboys team, before storming all the way back for a win in Dallas. Last week the Steelers took to the air and got out to a quick 22-7 lead at the half. This could easily happen again, but with the Jacksonville offense struggling, it is doubtful Pittsburgh will need to air it out as much.

Over the past few weeks, the Jaguars have allowed a lot of production to Wide Receivers, but typically it comes from out wide. This include Davante Adams and Marquez Valdes-Scantling, Brandin Cooks and Will Fuller, and Keenan Allen and Jalen Guyton. In a game where the Pittsburgh Steelers should see a dip in pass volume, Juju is just a low-end WR 3 this week.

After an amazing week 9 performance where D.J. Chark went for 7-146-1, it all came back down to earth as the bad weather and tougher opponent led to 4-56 day. Many of us would believe a bounce back is in order as the Jaguars travel back home, but waiting for Chark and company is a formidable Steelers Pass D. Last week the Steelers allowed a solid game from Tee Higgins, but when you dive into his production, 79 of his 115 yards came from the slot. This season Chark only has 103 yards in 8 games from the slot, so banking on inside usage to make his fantasy day might not be recommended.

Jake Luton did show some promise versus a weak Texans secondary without their top CB Bradley Roby. However, last week we saw why he was a 6th round pick, only completing 18-35 for 169 and 1 TD. Now the Jaguars face an even tougher matchup for wide receivers versus Pittsburgh, making D.J. Chark nothing more than a low-end flex play in week 11.

The good news for the Bengals is that they will not be facing the Steelers in Week 11. The bad news is that they face a Washington Football Team that has seen the second fewest drop-backs per game on defense in 2020. This low pass volume has produced many fantasy duds, particularly for inside WRs. This includes slow games from CeeDee Lamb (0-0), Cooper Kupp (5-66), and Jarvis Landry (4-36). This season no team has allowed less points to the slot than Washington, so it is something to monitor for Tyler Boyd this week.

Tyler Boyd has been a constant fixture in the pass game for Cincy all year, so calling him a must sit would be insane. That being said, Boyd had his slower games earlier this year versus solid interior defenses including the Colts and Chargers. Overall, Boyd is best viewed as a flex play in week 11 versus his usual WR2 self.