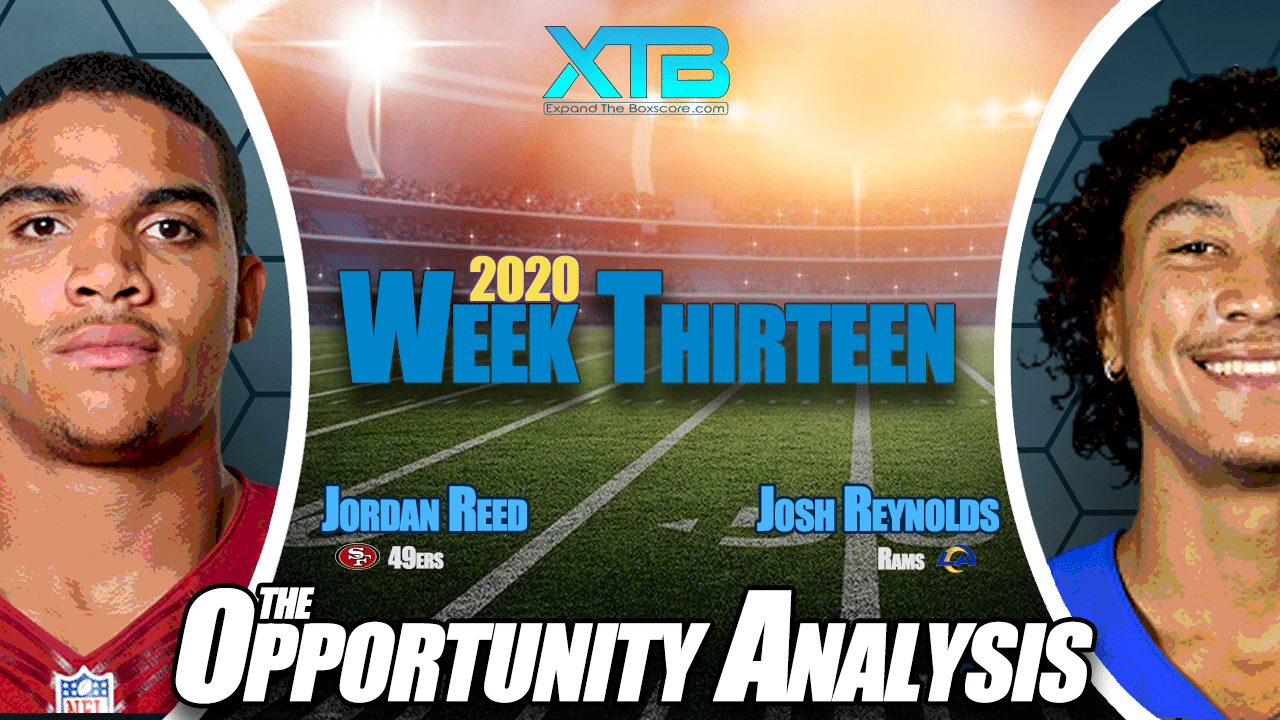 The 49ers just seem to have the Rams number as the 49ers secondary held Jared Goff to under 200 yards passing. This led to bad games for both Cooper Kupp and Josh Reynolds. This week the Rams look to bounce back immediately against a struggling Cardinals DST that has faced the 9th most drop-backs per game on the season.

Last season Patrick Peterson shadowed Robert Woods, which could lead to additional opportunities for both Kupp and Reynolds this week. This season the Cardinals allow the 10th most points to the slot, while San Francisco is tied for 30th in that metric. This drastic improvement in matchup should land Kupp right on the WR2 map. Not to be out done, secondary outside receivers including John Brown and Preston Williams both had solid showing against Arizona, so Reynolds should find himself on the WR3 map.

We can throw out last week’s performance since the 11 dropbacks from a practice squad wide receiver is now deleted from our thoughts. Even before last week the Broncos were coming off a down volume game only dropping back 31 times. This week they will need to play keep up as the Chiefs are sure to score points in week 13.

Prior to that Week 12 debacle Jeudy was coming off four straight games with at least eight targets. This led to some solid performances including three games of 68 or more yards. Now with Hamler playing primarly in the slot, Jeudy will have a much easier matchup on the outside as over the past few weeks Mike Evans and Nelson Agholor have had solid performances versus Kansas City.

As for Fant, the last time these two teams faced off the Broncos tight ends combined for 10 receptions and nearly 100 yards. Now with Fant dominating routes in Albert O’s absence, look for Fant to be on the TE1 radar in Week 13.

The 49ers are coming off a solid win against the Rams, but it was a relatively quiet game for Jordan Reed. His 2-18 probably left a lot of fantasy managers scratching their heads, but Deebo Samuel was able to do whatever he wanted, leading to very little production for everyone else. The bright side for Reed was his usage as his 25 routes were 15 more than fellow tight end Ross Dwelley. Reed’s six targets were second on the team only trailing Samuel’s 13 on the day.

In Week 13, Reed has a big opportunity against a Bills team that has struggled to cover the tight end so far in 2020. This includes solid games from Hunter Henry (7-67) and Jacob Hollister (5-60) in two of the last three weeks. Overall when facing top tight ends this season the Bills have allowed five games of double-digit fantasy points. This matchup should allow Reed to finally become a rock solid TE1 in Week 13.

Keenan Allen is already coming off a slower game where he only secured 4-40-1. Even though his fantasy day was saved by the touchdown, it was interesting to see him only secure four receptions on a day where Justin Herbert had 55 dropbacks. Now flash forward to this week’s opponent, the Patriots, who have faced the fewest dropbacks per game on the season. This has allowed them to play well pretty much across the board versus all pass catchers in 2020.

Keenan Allen should be viewed as strictly a flex play in Week 13 as he will see a lot of Stephon Gilmore this week. The last time these two squared off was in 2018, and in that game Allen was able to find the end zone but only finished the day with 2tworeceptions. Banking on a touchdown will make it tough to trust Allen this week, but with how well he is playing it will be nearly impossible to completely fade him.

The Steelers have cruised their way to an 11-0 record. This is most in part due to the ridiculous girth of talent they have on their team. However, this also means week in and week out not everyone is going to get a piece of the pie, leaving some fantasy days to be less than desirable. In Week 12, Big Ben and company did not have to do much to beat the COVID Ravens, but JuJu Smith-Schuster still got his, accruing 8-37-1.

This season the Ravens defense has been much more susceptible to inside wideouts, which lead to a perfect storm for JuJu.

This week the Steelers take on a Washington team that has allowed the fewest points to slot wide receivers in 2020. A lot of this has to do with the low amount of dropbacks Washington has faced this season, trailing only the Patriots in dropbacks per game on defense. This has led notable primary inside receivers to struggle, including Ceedee Lamb (5-21), Cooper Kupp (5-66), and Jarvis Landry (4-36).

Playing at home we should expect the Steelers to handle this game versus Washington, making JuJu a risky start in Week 13.

Cole Beasley’s performance last week was saved by a passing touchdown, but his 4-25 against the Chargers should not be overlooked either. Beasley will be a popular plug-n-play flex option with John Brown out again versus the 49ers. But many people should pause before slipping Beasley into their lineups.

This week the Bills take on a 49ers defense that has allowed the second fewest points to slot receivers this season. Very similar to the Washington Football Team a lot of this has to do with a low dropback total, limiting teams to just 35.7 attempts per game, 29th in the NFL. In turn the 49ers have allowed just 21% of their wide receiver production to come from the slot which is primarily where Cole Beasley operates.

If you are struggling to find a WR3 play in Week 13, I would try to pivot away as I do not see a passing touchdown this week for Beasley.