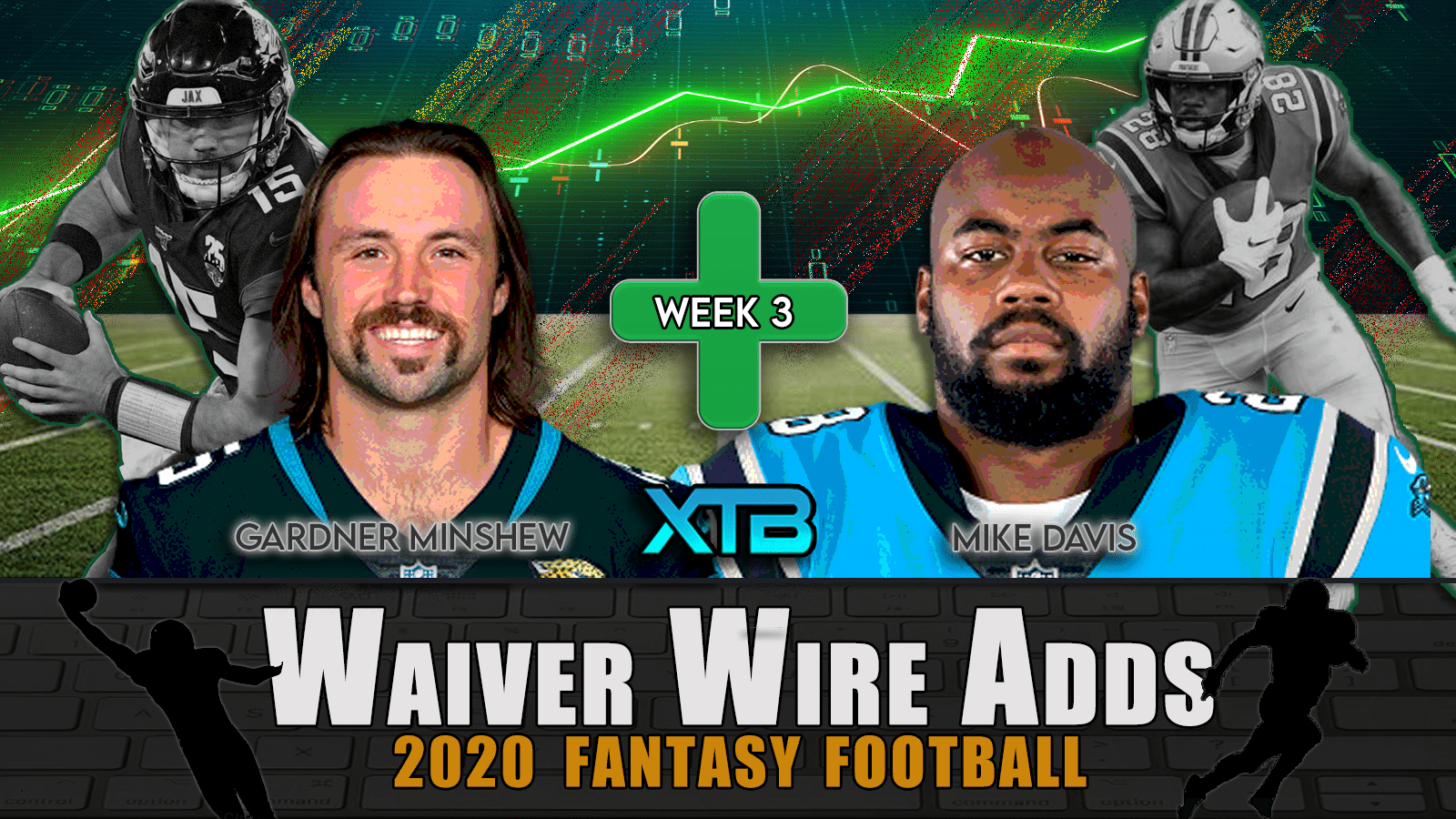 ‘Minshew Mania’ looked dead in the water for one half of football yesterday, but Gardner Minshew flipped the switch and is the QB12 heading into Monday Night Football. The rushing upside was there for a second consecutive game after landing on our waiver wire piece last week, and if your league gives bonuses for 300-yard passing games, he paid off there too.

Minshew is the QB11 after two weeks and should be in plenty of game scripts that allow for offensive production. Minshew has juicy matchups against Miami, Cincinnati, and Houston coming up.

Ryan Tannehill is QB9 after two weeks, ahead of Lamar Jackson, Ben Roethlisberger, Deshaun Watson, and Carson Wentz to name a few. Will his stature above them last? Maybe not, but it is apparent that Tannehill has found a system that he can produce fantasy points in despite a run-first approach.

The schedule will get tough sooner than later, but if you had Jimmy Garoppolo and need a QB for one week, Tanny gets the hollow shell that is the Minnesota Vikings secondary in Week 3.

The Los Angeles Rams have a confusing backfield situation, but if the offense is putting up points the backs must be rostered. Darrell Henderson showed why he was drafted so highly in 2019 and why Malcolm Brown has had to claw for touches over five seasons. Henderson averaged 6.67 yards per carry and caught two of three targets for 40 yards. Bellcow or not, we want to have players attached to productive offenses.

Welcome to Thunderdome! Christian McCaffrey users must worry if they do not have the top waiver claim, because Mike Davis will see his roster percentage skyrocket after CMC left Sunday’s contest with an ankle injury. If Davis is pressed into action, he will be the uncontested starter in the Panthers backfield. He received nine touches, eight through the air, for 75 total yards.

The Jets are a tire fire, but La’Mical Perine is an upside addition to your fantasy team. Frank Gore continues to be a 3-yard per rush machine, but he is what he is. Perine looked good logging three carries for 17 yards.

It is great to see Jerick McKinnon rostered in so many leagues despite entering Sunday as the third string running back. Those numbers will spike after Raheem Mostert and Tevin Coleman left Sunday’s win against the New York Jets. In the year of our Lord 2020, McKinnon came back after missing two seasons, saw the two backs ahead of him get injured, and it happened in Week 2.

McKinnon could see a heavy workload against the Giants, Eagles, and Dolphins in coming weeks.

Joshua Kelley is back on the waiver wire program because he must be rostered in 100% of leagues. Kelley is the obvious Melvin Gordon replacement and received a healthy 25 touches in Week 2. Next week brings the Carolina Panthers, and points should be abundant.

I never would have expected to see Myles Gaskin excel, but here we are. Gaskin finished third in receptions and fourth in targets for Miami Sunday and averaged over six yards per carry on seven carries. Jordan Howard is dust and Matt Breida has not been incorporated to the levels fantasy prognosticators expected, which means it is time to ride Gaskin until the wheels fall off.

I have no faith in Dion Lewis being successful replacing Saquon Barkley, but touches are touches.

The waiver wire window is closing on adding Laviska Shenault Jr. He once again logged targets and carries as a do-it-all offensive weapon. 92 total yards is worthy of flex consideration in all formats, especially is Gardner Minshew keeps balling out.

Despite catching two of seven targets Sunday, Danny Amendola continues to get targeted with Kenny Golladay shelved. Amendola has 14 targets over two weeks and will more than likely get a handful more on the road against Arizona next week. Golladay is expected to return Week 3, but that does not mean Amendola is going to fade from the Lions offense.

Josh Allen is on another level to start the 2020 season, and if rising tides life all boats, rostering Cole Beasley is in play. Beasley has nine catches on 13 targets to open the season and will continue to be Allen’s safety valve through the air.

Russell Gage is a thing and we must adjust. Gage logged another nine targets and a touchdown during Sunday’s agonizing loss to the Cowboys. He will continue to get fed with Julio Jones and Calvin Ridley demanding coverage.

Courtland Sutton suffered a serious knee injury, which means K.J. Hamler will see a spike in snaps and targets. It is unclear how long QB Drew Lock will be out, but Jeff Driskel is fine as a fill-in and should not damage Hamler’s fantasy value any more than Lock.

We are going deep on the waiver wire for the final receiver this week. Darnell Mooney is a 5th round pick from Tulane, was hyped by the Bears all preseason, and has already rendered free agent WR Ted Ginn Jr. useless (he was a healthy scratch Sunday). Mooney has caught all six targets and notched his first touchdown against the Giants.

Pay attention to the speedster, especially in dynasty formats.

Logan Thomas has 17 targets over two games. The Washington Football Team is bad. Pick him up off the waiver wire. Play him.

Pour one out for C.J. Uzomah, one of my waiver wire targets last week. Drew Sample will get ample looks from rookie QB Joe Burrow and is the perfect streaming option against the Eagles and Jaguars over the next two weeks.

The Mo Alie-Cox breakout took three years, but the MAC hive is dancing in the streets. The former basketball player (drink) took advantage of Jack Doyle not playing and should turn it into a decent number of weekly targets once Doyle returns.

Alie-Cox could continue to produce against the Jets, Bears, and Browns over the next three weeks.