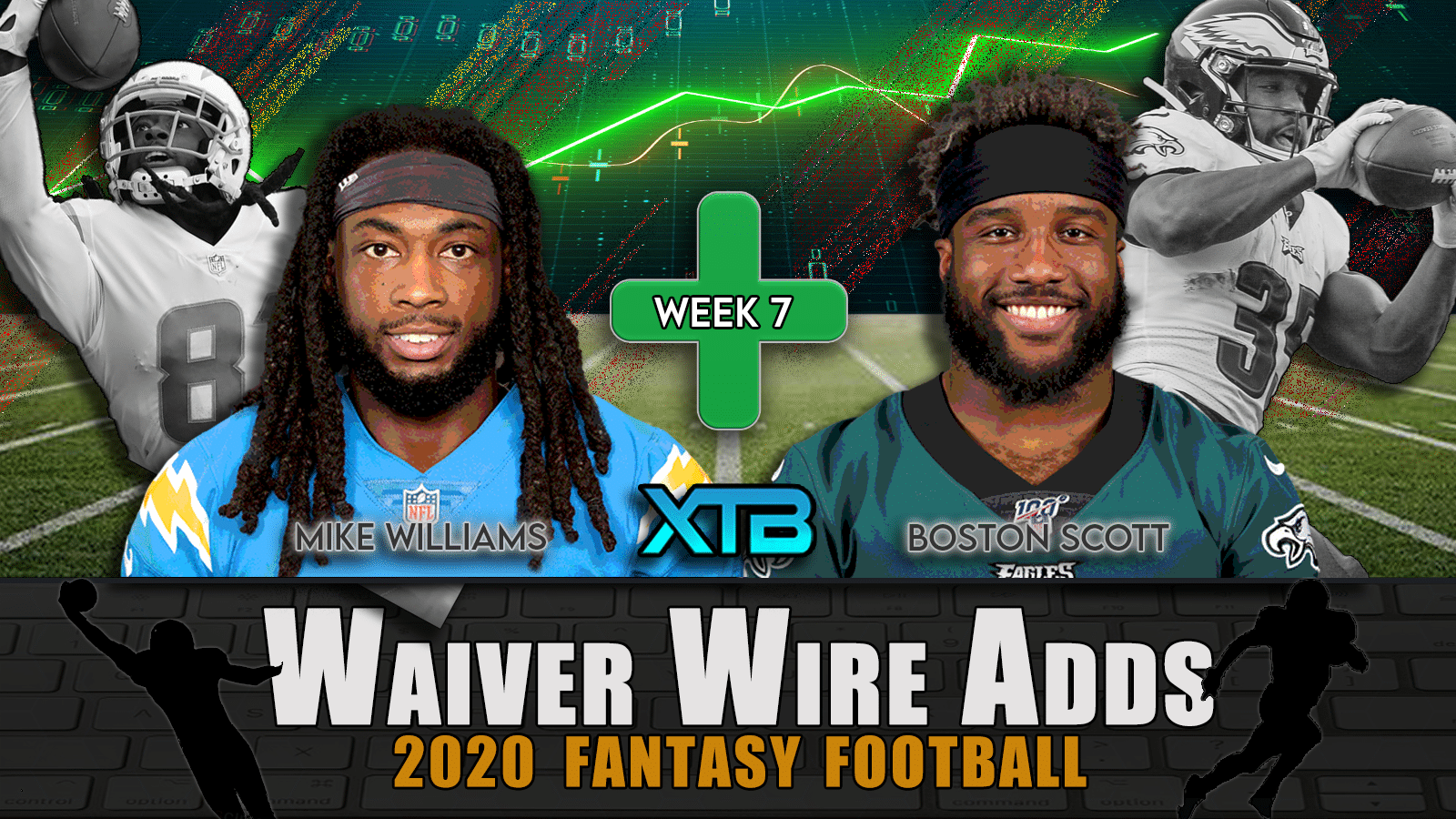 Week 6 may have been the best week for player health, but the waiver wire continues to offer talent worth rostering. Four teams are on bye Week 7: Baltimore, Indianapolis, Miami, and Minnesota.

The demise of Jimmy Garoppolo was greatly exaggerated. Jimmy G will not be confused for an elite quarterback anytime soon, but as long as Kyle Shanahan is his coach, he has fantasy value. His schedule going forward contains seven positive matchups for passing offenses. Garoppolo could be a stream-to-keep option that is widely available.

Hear me out. Kyle Allen plays the Dallas Cowboys at home in Week 7. Allen is Week 6’s QB14 heading into Monday’s two-game schedule, so the worst he will finish is QB18. Considering Allen has 1.5 reliable offensive players, his performance in Week 6 is more than admirable. I say this roughly once a week in this column – you could do worse!

Baltimore has a bye this week, but if Mark Ingram is out for several weeks the back to add is Gus Edwards. He took over the lead back role and posted whelming numbers, but he did score. Baltimore will continue to be run-heavy, making Edwards a must-add off the waiver wire with the injury landmines that are running backs.

Brian Hill was not impressive with his 12 total touches in Week 6, but Atlanta’s offense is clicking and Hill will see his fair share. The Falcons had a big lead against whatever you want to call the Minnesota team, which lead to Hill getting one-third of the running back touches. Bye weeks force fantasy players to start less than ideal options, but Hill is attached to a high-powered offense with two poor defenses coming up on the schedule.

Tevin Coleman was expected to miss one month with a knee injury. Add Coleman as a waiver wire bye week fill-in and Raheem Mostert handcuff (or replacement).

Coleman may not be back next week, so JaMycal Hasty is an add if Mostert misses time. It is not ideal, but touches are touches and the running back position is a cesspool on the waiver wire.

Miles Sanders is set for an MRI on his knee, and with the Eagles playing Thursday it is more likely than not that he misses Week 7. Enter Boston Scott because someone must tow the rock. Scott excels as a pass catcher out of the backfield but will have an opportunity to be the overall lead back if Sanders misses time. Corey Clement also has some appeal if Sanders is out.

I was a doubter of Travis Fulgham, but there appears to be staying power for the oft traveled wideout. He put up 6/75/1 against a solid Ravens defense and will be rewarded with two games against the Giants and one against the Cowboys over the next four weeks. This is the last chance to add Fulgham before he is widely rostered.

The touchdown is great, but the low target share was not for Brandon Aiyuk in Week 6. The 49ers ran the ball 37 times but that had more to do with a large lead than a lack of trust in the pass offense. A road game against the Patriots in Week 7 may seem like a bad matchup for the 49ers passing attack, but Aiyuk and company should be forced to pass more against a competent offense.

Drew Lock looked like he was out for a month but managed to keep Tim Patrick’s good run of fantasy production alive. Patrick is the perfect flex option off the waiver wire with two home games against Kansas City and the Los Angeles Chargers coming up.

Rising tides lift all boats, and Adam Humphries’ boat had a season-best performance in Week 6. Corey Davis is still out, and Ryan Tannehill is playing at an exceptional level. A.J. Brown and Jonnu Smith will command attention, leaving Humphries as a solid bye week receiver with PPR upside.

It feels like months ago, but Mike Williams balled out against New Orleans before heading into a bye. That capped his addition to rosters, making him available on the waiver wire in over half of leagues heading into Week 7. Take advantage of his early chemistry with Justin Herbert.

Trey Burton has at least five targets in the three games he has played in 2020, and vulture a touchdown from Jonathan Taylor in Week 6. Despite having three tight ends (when healthy) on the field at any given time, Burton has stood out and is worth rostering despite a Week 7 bye.

Imagine not targeting on offense Irv Smith Jr. sooner; Smith has back-to-back games with four receptions and at least 55 yards. Smith also has a Week 7 bye so he may be available for longer than this week’s waiver wire period.

Dallas Goedert is eligible to come off Injured Reserve, so it is important to monitor his practice status going forward. Stash Goedert and play him with or without Zach Ertz in the lineup.

It was good to see Logan Thomas log his first touchdown since Week 1. Thomas also had his best yardage output since Week 3. Like Kyle Allen, Thomas gets the dreadful Cowboys defense in Week 7.