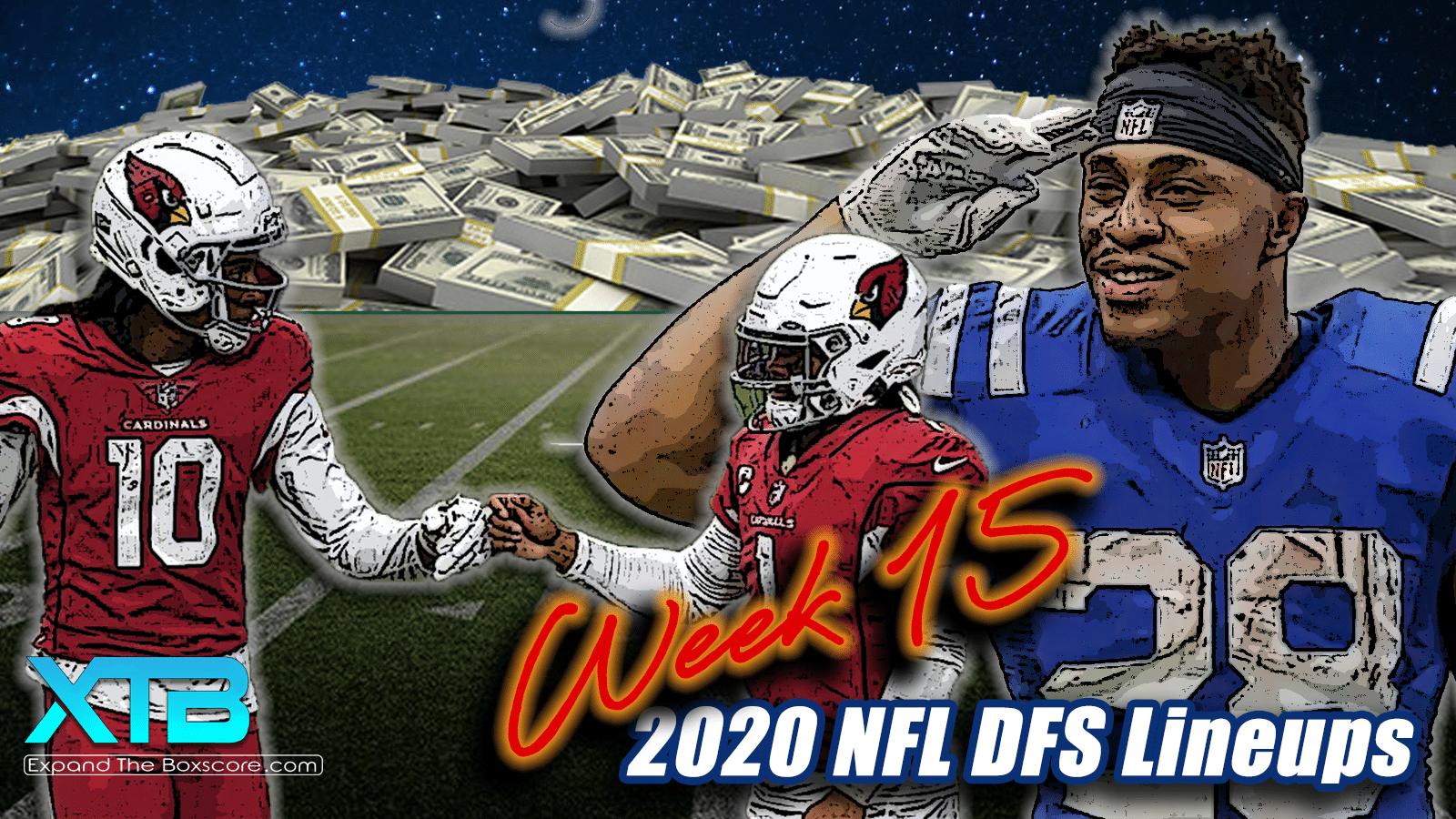 Posted at 10:02h in DFS by Rolando Gonzalez
0 Likes
Share

Shoutout to my guy Jeff Hicks for coming in clutch for me in Week 14. With week 15 here, there is a few daily fantasy matchups that must be played.

Kyler Murray is back in my lineup as my top quarterback play for Week 15. The Cardinals play host to the Philadelphia Eagles in what should be a high-scoring affair. Murray and the Cardinals are coming off a nice win on the road against the Giants, which has propelled them back into the playoff picture in the NFC.

The biggest factor for me in this matchup is Philadelphia’s pass defense. It has not been great these past couple of weeks. Against Green Bay’s Aaron Rodgers and New Orleans’s Taysom Hill, they gave up multiple touchdown passes and nearly 300-plus yards passing to both quarterbacks.

I fully expect for K1 and the high-powered Arizona offense to soar this week and to put up huge numbers on Sunday. Murray will throw for 300-plus yards and run for another 50-plus on the ground as well. I am a big believer of what is going on in the desert and this will be the game for them to do get the engine running hot again.

Who knows, maybe a certain Arizona playmaker might make his way into my daily fantasy lineups to pair with Murray.

Jonathan Taylor is going to keep the good times rolling. Taylor has had a roller coaster ride of a rookie season but over the last few weeks, he has been on an absolute tear averaging 22 fantasy points per game his last three games. This week Taylor and the Colts face the Houston Texans and their horrendous run defense. It is no secret that Houston cannot stop the run.

The Texans are currently 31st in the league at stopping the run and I expect the Colts to take full advantage of that all game long. On top of the salivating matchup with Taylor’s rushing upside, Colts quarterback Philip Rivers also loves the short passing game to his running backs. I cannot wait to see Taylor go off for 25 touches in this one with over 100 yards on the ground and another 50-plus receiving with two more touchdowns.

I am all in on the Arizona Cardinals in daily fantasy, and I am rolling with superstar wide receiver DeAndre Hopkins this week. As I mentioned earlier, this big time stack play is going to light it up against the Philadelphia Eagles this weekend. Hopkins gets an early Christmas gift as he will most likely be shadow covered by Eagles cornerback Darius Slay. Slay has been a big time player in past seasons, but has been getting burned by every top tier receiver the past few games.

In Week 12 against the Seahawks, D.K. Metcalf had 10 catches for 177 yards,  and in Week 13 Davante Adams went off for 10 receptions for 121 yards and two touchdowns. Hopkins is right there with those guys when it comes to talent and production so do not be surprised when Hopkins balls out for a stat line of 12 receptions for 150-plus yards and a couple of scores to go with it.

T.J. Hockenson is my top play at tight end for Week 15. Hockenson has solidified himself as a top five fantasy tight end this season, and this week has a great matchup against the Tennessee Titans. Tennessee is currently in the bottom-third of the league at stopping opposing tight ends, and Hockenson has been a high volume target in Detroit’s passing game.

Over his last eight games, seven have gone for double-digit targets. That consistency alone is something I am taking advantage of. Detroit is back to its old ways as of late as they are top 10 in the league in pass attempts the last three weeks. I love Hockenson and the Lions to pull off the upset against the Titans, as he will lead them with a big time performance of 10 catches for 100 yards and a touchdown.

This play could play out differently if Matthew Stafford misses Week 15. Hockenson would still be a target hog, but production could dip.