The Denver Broncos did not have a single active quarterback due to COVID-19 protocols and was apart of a game in which the team collectively threw for less than 100 yards. Week 12 was certainly one to remember for a plethora of reasons.

The Denver Broncos were forced to play the New Orleans Saints without a quarterback due to COVID-19 contact tracing. Evidently, Drew Lock and the other Broncos signal callers did not properly socially distance, wear masks, or take other COVID-19 measures. This forced the Broncos to promote practice squad wide receiver Kendall Hinton to the 53-man roster.

The former Wake Forest quarterback-turned-wideout struggled, to put it nicely, in a situation in which many fans like myself feared back in August. Not having a quarterback is the worst possible thing that could happen to any football team, nevertheless a pro football team. Hinton went 1-9 with 13 yards, and 2 interceptions and the Broncos lost 31-3.

While the NFL may have taught the rest of the league a lesson here, I will go on the record and say the NFL should be embarrassed that they did not push this game back, or at least bend the rules for the Broncos to be able to add a legitimate quarterback to their roster.

The Falcons absolutely took apart the Las Vegas Raiders in a 43-6 victory. Raheem Morris deserves a shot at the head coaching job as this team looks much better under his watch. The Falcons defense had five sacks, one interception, and four forced fumbles and recoveries. This game makes me question the Raiders, and certainly shows me they are not consistent enough to win a Super Bowl.

Without Tua Tagovailoa, Ryan Fitzpatrick returned to New Jersey and the New York Jets 20-3 in a boring AFC East affair. The Jets are 0-11, and I am shocked that Adam Gase still has a job. Sam Darnold is auditioning for his career at this point and threw two interceptions against the Fins….not good.

Beast in the NFC Least

The Washington Football Team scored 21 unanswered points in the fourth quarter to cruise to a 41-16 win over the Cowboys, and take first place in the NFC Least. The Giants beat the Joe Burrow-less Bengals on Sunday 19-17, although Daniel Jones got hurt and Colt McCoy had to lead the G-Men to a victory.

The Eagles play on Monday Night Football in what shapes up to be a loss to the Seahawks. The NFC Least is horrible, but at the same time it is oddly entertaining. Admit it, you enjoy watching the nonsense.

It is Week 12, and we have already seen the Atlanta Falcons and Houston Texans fire their head coaches and general managers. Add the Lions to the list of teams searching for a new duo in 2021. After losing on Thanksgiving once again, the Lions fired Matt Patricia and Bob Quinn after a failed tenure. The Lions will look to either rebuild fast or completely break it down and have a long-term rebuild, i.e. the team’s current plight.

The Jacksonville Jaguars lost a very close, winnable, game versus the Browns and shortly after fired general manager David Caldwell. While the coaching staff will stay for the remainder of the 2020 season, I would almost guarantee they will be the fourth NFL team with a new head coach and general manager in 2021.

The Jaguars could end up with the first or second pick in the 2021 NFL Draft and have some young talent. This is a very “sexy” opening.

The Browns are 8-3, but in my opinion are a weaker 8-3 team. Watch a Browns game, and watch a Chiefs game; one team is clearly better than the other. Week 17 could be very interesting for Cleveland against the Steelers, especially if the Chiefs only have one loss heading into their season finale.

While they do not have much to play for, the San Francisco 49ers are not dropping dead this year. After trailing 17-3 in the third quarter, the Los Angeles Rams mounted comeback but could not take a big lead. With the game tied 20-20 late in the fourth quarter, wide receiver Deebo Samuel came up huge with three catches for 35 yards to set up a game-winning Robbie Gould field goal.

Cam Newton was able to do just enough to lead the Patriots to a shocking victory over the Arizona Cardinals. Even though Cam had two interceptions, one of which set up a late go-ahead field goal opportunity for the Cards, he was able to run for a first down on a 3rd and 13 situation on the last drive of the game.

Rookie safety Isaiah Simmons got a 15-yard penalty for illegal contact to the helmet when hitting Newton, which led to a game-winning Nick Folk kick. The Patriots defense came up huge several times in the game, including a goal-line stand before halftime, an interception of Kyler Murray which led to a touchdown, and two sacks of Murray. The Patriots will look to continue their winning ways against the Rams next week.

The Cardinals should be ashamed of their play calling before the half, unable to score and keeping a 10-7 halftime lead instead of a six or ten point lead. At the end of the game they had three runs to set up a missed field goal instead of being aggressive and trying to pass at all for a first down or more.

Regardless of the outcome, they were far too passive at times, and just got out smarted by Bill Belichick and the Patriots on the road.

I do not know how many times I have to keep saying this but the Bucs are not that good. Tyreek Hill took advantage of the Bucs defense, catching 13 passes (15 targets) for 269 yards and three touchdowns. Look, the Chiefs could just be that much better than the rest of the league, but the Bucs offense feels so forced when playing behind. They have to figure it out quickly, or else the heat will pick up in Tampa.

Not much to say about the Sunday Night Football game other than the fact that Aaron Rodgers is still very good at throwing the football, throwing for four touchdowns. In 10 of the last 11 games, he has only been sacked zero or one time, per ESPN’s Rob Demovsky. The Packers are a fun team, and Davante Adams is an absolute beast.

Waiting all day for Tuesday night

While I think the Seahawks will crush the Eagles on Monday Night Football, the Steelers host the Ravens on Tuesday Night Football after their Thanksgiving night showdown was pushed back due to positive COVID-19 tests for both teams. I expect the Steelers to beat the Ravens, but when it comes to these two teams, it has been the best rivalry in the NFL during my lifetime. Anything can happen when these two play, so I think it will be close.

Last year I was able to interview University of Buffalo running back Jaret Patterson for the site, and what a great guy he is. This week he had the game of a lifetime versus Kent State. He rushed for 409 yards on 36 carries and eight touchdowns, tying a NCAA record. He had a long of 62 yards, and had over 200 rushing yards in the second quarter.

While he may not be a first round draft pick, he is going to be productive in the NFL and whichever team drafts him will not regret it.

The best stocking stuffer is socks. Buy your loved ones socks. 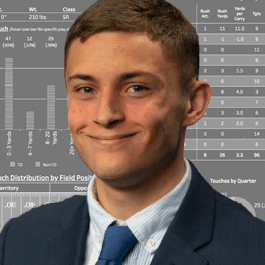