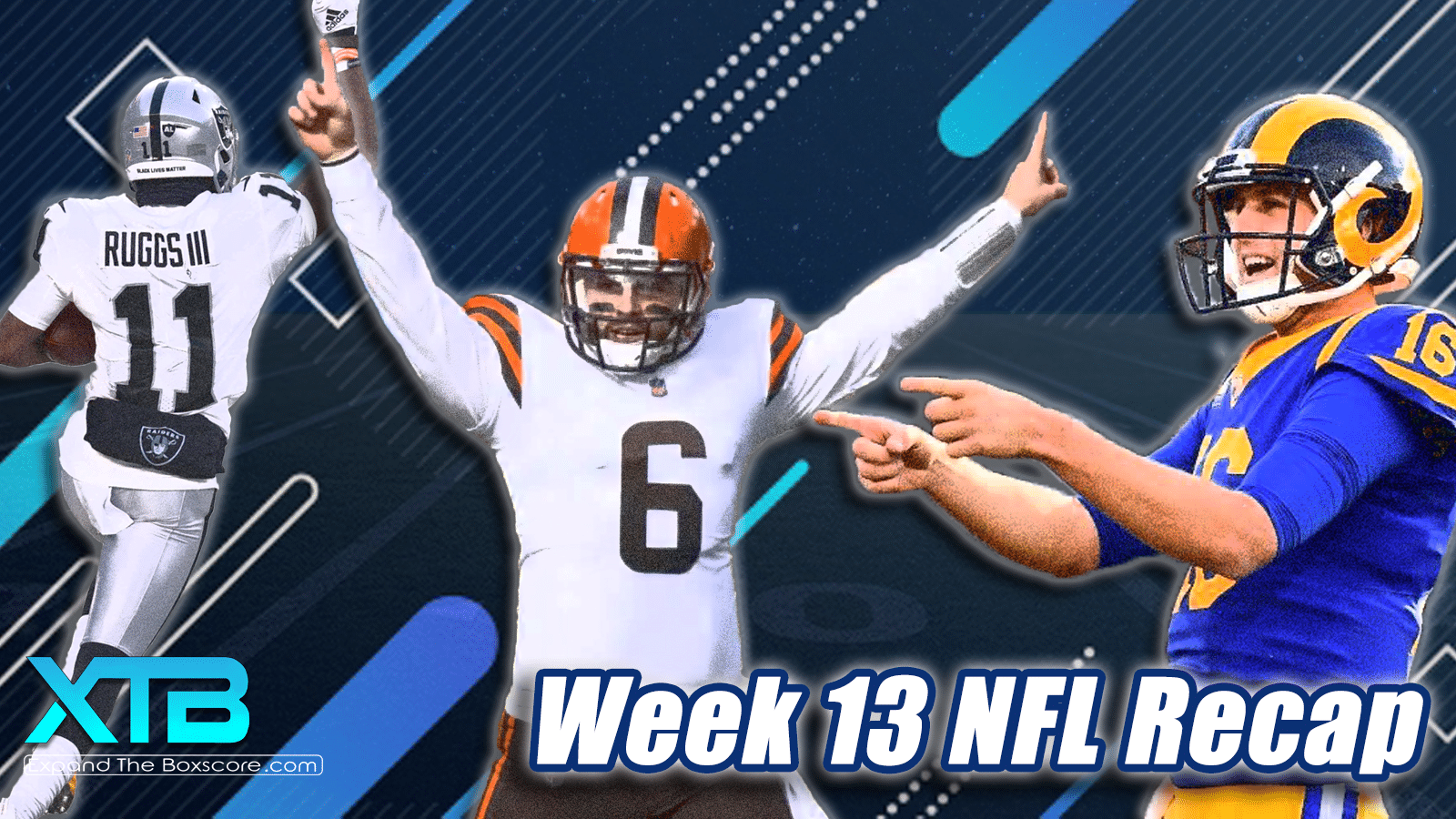 I am still trying to figure out what the hell Jets (former) defensive coordinator Gregg Williams was doing on the game-winning touchdown by the Raiders with six seconds left. Week 13 was an electric week across the league, let’s jump into it.

On Sunday the New York Jets should have gotten their first win. Down 24-13 in the 3rd quarter, they made a great comeback, eventually leading 28-24 with 35 seconds left in the game. The Raiders were out of timeouts and had to score a touchdown to win the game, starting the drive on their own 39-yard line. On 1st down, Derek Carr threw to Darren Waller for 15 yards, then a quick spike…19 seconds left.

On 2nd down from the Jets 46-yard line, Carr missed Nelson Agholor in the endzone to win the game. Gregg Williams blitzed, but the blitz was covered. The Jets were 15 seconds away from their first win, and out of 1st place for the 1st pick in the NFL Draft, and the Raiders had maybe three plays left to try to win the game.

Alas, Gregg Williams went ‘Double G’ Greg Williams, and blitzed six-plus defenders, Carr found rookie wide receiver Henry Ruggs on a stop and go route for a 46-yard touchdown, and the Jets would go on the lose the game 31-28. Because Williams blitzed as many men as he did with 15 seconds left and the Raiders out of timeouts…he got fired Monday.

It was such an inexcusable error by Gregg Williams that the 0-12 Jets fired their DC less than 24 hours from the end of the game.

The Jets did not play a bad game. They did not deserve to win but neither did the Raiders. Henry Ruggs dropped a ball that turned into a interception in the 1st half. In the 2nd half Ruggs fumbled a ball which led to a Jets go-ahead score. Yet Ruggs, Carr, and the Las Vegas Raiders were given a miracle win on the road, their first win versus the Jets on the road since 1996. The Raiders kept their playoff hopes alive by winning on Sunday, and face the Colts next week.

Only plus side for Jets fans: they still “own” the 1st overall pick, and therefore are in play for Clemson QB Trevor Lawrence.

Baker Mayfield! What a day for him, going 25-33 for 334 yards, four touchdowns, and zero interceptions and sacks taken. Baker also caught a 3rd down conversion from receiver Jarvis Landry. The Browns up 38-7, didn’t really do much in the 2nd half as they would go on the win 41-35. While this was a massive statement win by Browns I still question them as a legitimate contender, as the Titans just flat out did not show up in the 1st half.

The Browns defense did not show up in the 2nd half and I question their depth going into the playoffs. The Titans need to forget about that game, and just be happy they did not give up.

Taysom Hill and the Saints did enough on offense to get the win. I personally believe Drew Brees is the best option for the Saints if he is healthy, but Taysom Hill is certainly making a good impression under center. Hill has won two straight games but I am not confident he will be able to score 28-plus points if needed in the playoffs.

Drew Brees should be the starter when he is healthy. The Saints clinched a playoff spot yesterday, so we will see if they try to keep Brees safe and make sure he is 100% healthy before coming back.

The Indianapolis Colts defense is really good and showed it again Sunday. The Texans had the ball on the Colts’ 2-yard line with 1:36 left in the game. Unfortunately, Deshaun Watson fumbled the ball on a botched snap and it was recovered by the Colts. The Colts defense did not allow a single point in the 2nd half and forced a safety.

The Colts may not have the offensive stars that others do, but quarterback Philip Rivers has been able to make it work with Jonathan Taylor, Nyheim Hines, and T.Y. Hilton, among others. Colts could make a serious run in the playoffs with that defense, if and only if the offense can get them a lead.

Backup quarterback Colt McCoy and the New York Football Giants went into Seattle and absolutely dominated the Seahawks for most of the game. The Giants ran for 190 yards and their defense only allowed 327 total yards against Russell Wilson and the Seahawks. I was in complete shock that the Giants were able to win this game, and now they have the best chance to win the NFC East and make the playoffs.

Head coach Joe Judge was an odd choice for the Giants, but after a rough start to the year the Giants have played very well the past few weeks and their defense has turned into an exciting unit to watch. Seattle played awful, and 9.9 times out of 10 would beat the Giants this year. Move on and forget.

Best of the Rest

The Bengals and both of their backup quarterbacks gave the Dolphins a run for their money, but lost. The Dolphins are now 8-4 and in a position to make the playoffs under second year head coach Brian Flores. Speaking of, Flores was involved in a pretty significant altercation after a late hit on Fins wide receiver Jakeem Grant.

Flores was seen being held back by many of his staff members and teammates during a “brawl” near the Bengals sideline. I love the fire from Flores, and he is creating a damn good culture in Miami.

The Patriots went to L.A. and beat the Chargers 45-0. Anthony Lynn’s tenure in L.A. should be coming to an end as the 2020 season winds down. He is awful at game management. He may be a good person and a good coach, but he just does not have what it takes to run an organization, especially on game day.

Mike Zimmer and the Vikings survived the Jaguars even though they were losing for most of the game. Their defense played pretty well as they only gave up 17 points. Their offense on the other hand just was not that good and did not deserve to win this game.

In their first matchup of the 2020 season, the Rams beat the Cardinals with a really good offensive performance, winning 38-28. The Cardinals were in this game for most of it until Kyler Murray threw a late pick-six in the 4th quarter. The Cardinals at 6-6 have really slipped the past few weeks, while the Rams and quarterback Jared Goff responded to the critics after a disappointing Week 12 showing.

Interim head coach Darren Bevell got his first win after being down 30-20 in the 4th quarter. The Lions scored a touchdown, forced a fumble, scored a go-ahead touchdown, and then stopped the Bears in a wild comeback that never should have happened. Bears gonna Bears losing five straight games, and Chicago could be looking at a new general manager, head coach, and quarterback in 2021 after starting the season 5-1.

The Packers defense shut down Eagles quarterback Carson Wentz to the point that he got benched and rookie Jalen Hurts got some playing time. Philly is a mess and now many question if Wentz is a starter in the league. While I cannot predict the future, I do know the Eagles need to make some massive organizational decisions this offseason. Trading or cutting Wentz will not be one of them. His dead cap hit is too high and cannot afford to trade or cut him.

A great gift this holiday season is a mask. Buy someone you love a cool mask. And wear a mask! Thanks for reading the Week 13 recap. Have a great week everyone!